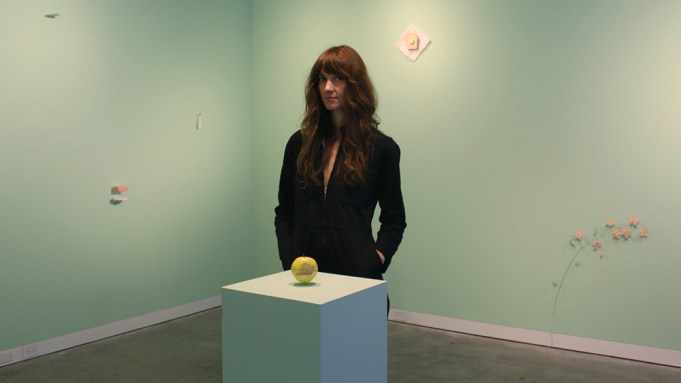 Virginia-born, New York–based artist Langdon Graves explores belief systems—ranging from ancient Greek mythology to nineteenth-century spiritualism to family ghost stories—and their connection to grief and trauma. While Graves has been probing this set of ideas for years, her latest body of work adds a personal twist. Presented in “Month’s Mind,” her second solo exhibition at Victori + Mo in New York, the delicate sculptures and drawings that evoke familiar tableaux (the half-smoked remains of snuffed cigarettes; a lingering outstretched hand) appear to float before the seafoam-green walls in clustered succession. The show, on view through January 18, commemorates the one-year anniversary of her grandmother’s death. Below she discusses how her new work was informed by childhood memories and family history.

Amy Brener on the Ritual Use of Utilitarian Objects

When I was little, my grandmother told me about her encounters with ghosts. After her health declined a few years ago, I began asking her about her life, and the ghost stories popped up again. My mom chimed in with her own stories. Then, my aunt did too. I don’t believe these tales, but I realized there was an oral tradition among the women in my family.

Mother’s Mother’s Mother [all works 2019] depicts a staircase, based on the one in my grandparents’ house. At least two people fell down it, and both claimed they were pushed. My grandmother had a bad relationship with her mom. She thought that her mother haunted the steps and blamed her for pushing people down them. My grandmother broke a pattern of bad behavior by nurturing my mother, and taught my mother how to care for me. I think of that as a turning point for our family. The colors that I use reference the palette I remember in my grandparents’ house—from bathroom tile and kitchenware to furniture and my grandmother’s clothes. They have other associations too. The pink is a sickly color resembling swollen, cut flesh. The yellow also recalls sickness. I spent a lot of time in a children’s hospital when I was young, and these were the colors I saw there. I painted the gallery walls this particular shade of green because it’s close to the color of scrubs. In operating rooms and morgues, technicians wear green because, after looking at the interior of a body for long periods, their eyes become fatigued. The opposite color refreshes the eye’s photoreceptors. I was thinking along those lines about these colors as a coping mechanism, or relief from facing mortality.

The show is an anniversary of a funeral. The title “Month’s Mind” is derived from a Catholic tradition celebrated in Ireland one month after someone’s passing to ease the family through their mourning, after they stop receiving cards and casseroles. Other cultures have similar traditions: Rosh Hashanah and Día de los Muertos both commemorate passed loved ones.

A few years ago, I started studying mythology and classic ghost tales. I learned about beliefs like spiritualism, which is a belief system based on communicating with spirits. Planchette replicates a soap dish from my grandmother’s home. The bar of soap is embedded with a cast of a Susan B. Anthony dollar. Many women who were spiritualists were also campaigning for women’s rights here and in the United Kingdom. Most mediums were women. “Female” qualities—being overly sensitive and emotional—made the perfect vessel for a spirit to speak through. As a result of the connections made through spiritualism, women banded together to talk about marriage reform and African American rights. Susan B. Anthony wasn’t a believer, but spiritualism played a big role in granting women the right to vote. Mediums were made to bathe and perform séances in the nude to prove they were not hiding anything. The ancient Greeks buried their dead with coins on their eyes or in their mouths to pay the toll for crossing the River Styx into the afterlife. For Planchette I placed a dollar coin in the soap as an offering, and as a way of cleansing and revealing that there’s nothing to hide.

The period of spiritualism’s popularity in the mid- to late nineteenth century saw a cholera outbreak, yellow fever, and the American Civil War. It was a time of mass death and, before cremation was accepted in the West, people were afraid of being buried alive. Perennial references a safety coffin, which was rigged so that a person who was buried alive could alert those aboveground. The finger appears through a little pull cord. I arranged it so that we appear as if we are standing in the grave. The bell and flag would have appeared aboveground. The daisies mark the top of the grave. It’s a cheesy reference to the idiom “pushing up daisies”—I had to add some jokes.

I think a lot about how stories are told. The cigarettes throughout the show refer to my grandmother’s habit of chain-smoking while she told me her stories. I’ve always thought about cigarettes as a point of communication, like when people go outside to take a smoke break. My family is Native American, but when my grandmother was alive we were forbidden to research it. In some Native American traditions, tobacco was used in ancestor worship, as a way of conjuring or warding off a spirit through smoking, sprinkling, or wrapping it into sachets. Like Perennial, this show is a grave in multiple ways: I’m the end of my family line. I’m the last woman. I’m not married. I have no children. I infused this show with family stories as a way of continuing our experiences.