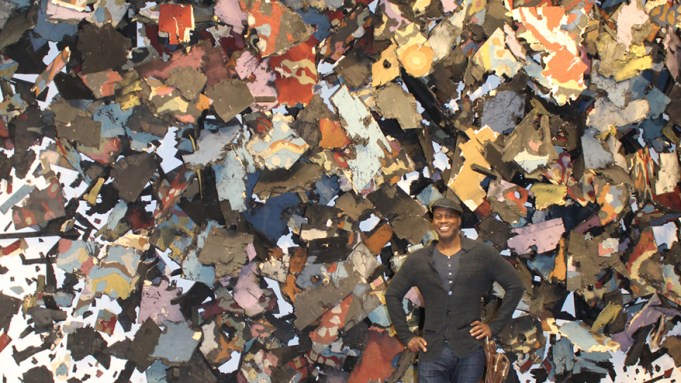 Leonardo Drew is best known for his installations of weathered materials, including cotton, metal, animal hides, and wood. A precocious artist, he won a competition at age thirteen for a drawing of Captain America, and later received offers to work in comics, but ultimately chose to pursue a career in fine art. He draws inspiration from art of the mid-twentieth century: the gestural movement of Jackson Pollock, the grids of Piet Mondrian, and the visceral materiality of Eva Hesse. Drew’s compositions have been primarily monochrome and based on a loose grid structure; however, his new installation at Galerie Lelong, Number 215 (2019), embodies a more organic explosion of color that appears less structured than earlier works. Abstract patterns painted on pieces of wood with a mixture of acrylic and finely ground sand have been smashed and reconfigured to jet out from the gallery’s central wall. The exhibition, on view through August 2, also includes wood assemblages, both monochromatic and colorful, that prefigure Drew’s use of new materials and the formal arrangement of Number 215. Below Drew discusses how traveling and working in China influenced the shape of this new installation. “City in the Grass,” a new public work commissioned by Madison Square Park Conservancy, opens June 3.

Once you find your artistic voice, you can find yourself in any new element you introduce. Being aware of my voice has been a crucial part of my experimentation with new materials, especially during several trips I took to China over the last four years. I have been working with soil and porcelain glazing in Jingdezhen, the Chinese capital of porcelain production. Types of porcelain vary depending on the kind of clay used, and each province has a different clay. I started with a white porcelain but I decided it was too fragile for the scale of my work. I went to five provinces before I found the place with the clay and dirt I wanted to use. I have always had a go-with-the-flow approach to my work, but that methodology was really tested in China.

I decided to travel to China because I have always been interested in how places there speak to me, particularly fantastic monuments like the Great Wall and the Forbidden City. There are gaps between how we understand ourselves and the world around us. I try to understand these gaps when visiting historic sites and then I re-create my experiences of them in the studio. During my time in China this meant working with mud and color through porcelain and then recognizing where color became more than mud—from there, as in Number 215, the mud became sand. A lot of my works are created in the studio from materials that I fabricate. It was a huge change to work with natural materials because I had to take a leap of faith to make them my own.

Number 215 started as an idea to transform the gallery space with a black explosion. As I installed it over the course of two days, I allowed the space around me and the experiences I had experimenting with porcelain in China to dictate how I realized the work. I had to communicate my feelings into something tangible. You can feel in Number 215 that there is an energy bursting out from the core. In the beginning, when building my compositions, I have two starting points that push energy between them. The core part of each piece is the grid. It looks visually complicated, but there is a grid, and from there I start adding other elements. I stopped drawing and painting in the early ’80s, because I wanted to continue to push myself artistically in new ways, but those skills return in the way I see and compose. Initially, I was thinking about painting and working with glazing in China. I was ultimately drawn to porcelain because of the alchemy, the unknowns of what happens when clay goes into the kiln. There are kilns that are about twenty-five feet tall. Due to their large size, I not only had the opportunity to play with color, but I could also experiment with scale and composition. The artisans in China make these magnificent vases and sculptures, but they are never thinking about abstracting. They are so fixed on tradition. I wanted to know what would happen if I smashed a lot of stuff on the floor and put it in the kiln. I wanted the appearance of shatter, but I didn’t want to glue each piece. They told me it would never work, but the fragments came out of the oven and were all stuck together. A lot of my things were thrown away because they thought, since it was smashed, it must be garbage. Number 215 is made from wood coated in colored sand, not clay, but it comes from the shattered forms I made in the kilns.

There is an interesting dynamic when working with people who value tradition. As I created alongside these artisans, I was amazed by what they could do in an instant. They all work together. It’s a completely different system of getting things done. I had to move to their rhythm. As an artist, I had to bring a high level of commitment. The way I learned to work with sand and dirt is embedded in Chinese culture. When they’re making and cooking things, nothing is wasted. With absolute certainty I can say that working in China has reaffirmed all the things I always felt, my approach to life, and how I balance and move around this planet. If I can go to another country where no one speaks my language and relate holistically to the people there and engage in fair trade-offs with them, spiritually and otherwise—there is nothing more beautiful than that. When I meet like-minded people, I become. As my projects moved forward—when I smashed stuff and put it in the kiln—it was about allowing the material to do what it wanted to do.