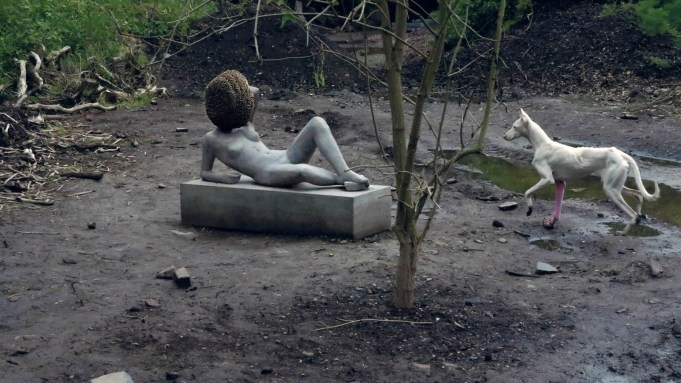 Pierre Huyghe is something of a master of ceremonies for his own art: he lays the ground, sets the scene and then lets things unfold as they will. A self-declared biology fiend and a graduate of Paris’s École nationale supérieure des Arts Décoratifs, the French artist has dedicated his career to de-emphasizing the primacy of the art object in favor of more fluid forms of production, constructing “situations” rather than finished artworks.

Time-based and context-contingent, Huyghe’s works often involve manipulated ecosystems—and they unspool in real time according to loosely delineated conditions, integrating installation, performance and film. The outdoor garden he created for Documenta 13 in a large park in Kassel, Germany, for example, featured a live dog with a painted-pink leg, a beehive, and an ant colony.

On view through Feb. 22 at the Los Angeles County Museum of Art, the artist’s first retrospective in the United States is nearly unrecognizable as an exhibition. More aptly described as a sprawling mise-en-scène, it draws some 60 works the artist made over the past 25 years into a single environment for exploration. Among the featured phenomena—ranged throughout the dimly lit museum spaces without explanation—are an elusive “scent,” an ice-skating rink, a series of aquariums and terrariums, and live actors of both human and animal persuasion.

Huyghe spoke with A.i.A. by phone about the hysterics of the art object, the importance of relinquishing control and why he loves feeling like a stranger in his own exhibition.

EMILY NATHAN You have, in the past, been resistant to the idea of a retrospective. What changed your mind?

PIERRE HUYGHE The retrospective—well, it’s just a word. I needed to see certain works or moments together, but I also took the exhibition as an object in itself, gathering things I’ve made in the past and placing them together in these conditions, letting them deal with each other, letting them be co-present. I tried to avoid adding an overarching meta-narrative that unites or objectifies all the work, either chronologically or by storytelling, or by creating some kind of scripted space.

A lot of the works on view have been mostly unseen in the past, since some of the exhibitions I have done were time-based events, constructed situations—and therefore only some viewers were able to witness them. So that has a certain privilege for some works, while other works were left in the shadows, or have simply disappeared. Some have changed during the years or over the course of their presentation, but also new ones were specifically made for this show.

I did not want this show to have that survey quality—the “best of” idea is not so interesting to me—but instead I tried to privilege key works that were important in the construction of thought. So the exhibition is the temporary co-presence of heterogeneous works, both live and inorganic, sketches or ideas—diverse elements that are animated by different rhythms. And once all my works were co-present, it was important that they become literally porous to one other, that they influence and affect each other and their context. The approach was to rethink the exhibition ritual according to that process, so that the exhibition itself becomes an evolving organism that grows and changes.

NATHAN In much of your work, you create spaces and orchestrate situations that the viewer is encouraged to explore without guidance. In this show, for example, rooms seem empty until something gets turned on; Human, the pink-legged Ibizan hound, roams the museum as she wishes; and visitors’ names are announced loudly by a man in a business suit as they enter the exhibition. What kind of “organizing structure” did you use to put this retrospective together?

HUYGHE The work is not “displayed” under a narrative—that’s a system I avoid. I could not imagine a chronological order, either. As you say, most of what I have done is construct situations that happen within a given body.  Every one is a constellation network of process, all sorts of heterogenous and anachronistic things come together or are associated within a constructed situation, and so it is difficult to present them in a site where they were not originally, or to organize them in a linear way.

In this show, I’m interested in a state of emergence, of non-directed attention, so that some works appear in one moment and then retreat into an invisible mode. Some works “leak.” For example, someone looking at the film The Host and the Cloud (2010) might suddenly see an actor appear physically in front of the projection, passing by wearing the same mask as a character in the film. That actor is part of the work Player (2010), and he may be carrying another fragment of the film—its musical soundtrack, which he is projecting through a speaker—into yet another space in the museum. Perhaps the dog with a pink leg—the one in the film A Way in Untilled (2012)—is now here present, wandering around a machine programmed to produce light and sound, L’Expedition Scintillante, act 2, untitled (light box). The meanings of these works leak out; something that was written or intentional becomes more porous, and there is this fluid contingency, a tension between presence and absence, allowing things to be undetermined.

NATHAN Your work has often been associated with relational aesthetics—a movement that privileges the living dynamic between viewer and object—and yet you have never placed particular emphasis on viewer participation, per se. How do you envision the role of the viewer?

HUYGHE I have often described the art object as a hysterical thing—an object that needs the gaze of a viewer in order to live. It needs to be addressed, but its construction is then limited. I’m trying to be indifferent to the human presence near the work, to avoid infantilizing people with categorization or some kind of exhibition program. Instead, I’m trying to break that down, because the object of the exhibition itself is the object I’m interested in. The medium between an art object and a subject—a viewer—is a dynamic process, and I’m trying to maintain that as much as I can.

Of course, the museum space is not a warehouse, totally free from procedures—there are certain conditions that must be respected. The museum is a machine for the gaze, it has rules—temporal, cultural and moral—that we all know, so within those constraints, I’m trying to allow for someone to not be driven. I see that person as a raw witness, as someone who is walking through the woods not knowing if he will find a ravine or a creek, or if an unknown animal will pass him on the left.

NATHAN In a related vein, how do you conceive of your own role with regard to the viewer’s experience of your work, considering issues of intention and control?

HUYGHE Obviously the exhibition involves intentionality, to a certain extent: some things are decided beforehand—but then I let them unfold in their way. An auto-exhibition would be interesting to me; but for now I still control certain conditions but not the growth, not the way things unfold and develop and evolve. Instead, the exhibition is an organism that diffuses endless images, rather than producing one image targeted or framed beforehand. As I said, the works are porous, they leak out or into each other, and their material realities exist with or without the gaze of a person.

There is no medium, no choreography. It’s a silent transformation, a continuity. This is what interests me: it’s not about the separation of the works, defined within their own frame, but instead when something at some point dissolves, or transforms. At some point there is no separation, but it is instead about continuity. I am very interested in this idea of the “dust of influence,” the fog or the residue of something that at some point you cannot anymore frame.

On the opposite end you have the hysterical object: one image or object controlled by the maker. There is a text by Adolf Portmann that speaks of “animal elegance,” an auto-presentation created for nobody and without reason. I’m interested in the indifference of address toward a viewer who enters. Not in a negative way, but in that elements exist and evolve whether someone is there to see it or not, with or without a discourse. It doesn’t matter; it lives on.

NATHAN There is, behind your work, something of the “mad scientist”—drawing together many lines of inquiry and research from disparate fields. How did you develop this multivalent artistic practice?

HUYGHE Nothing mad. You mentioned “relational aesthetics” and that I haven’t been much involved in the social participation aspect. But I have always been interested in the process between different elements in a network, and the roles of variables present or absent for us: instability. When I was young, I was planning to study biology, but after high school, when you are asked to specialize, I chose to go to art school. You learn very basic things through the study of ecosystems: for example, if you remove one element of this architecture, the chain might collapse. The possibility of the emergence of an event—and the “maybe” of any given situation—is really a key idea to me. And that comes from mathematics and the postulate formation, “if . . . where . . . ?” This kind of logic has always been of interest to me, and still is.

NATHAN What sort of evolution have you perceived in the exhibition—what development or transformation of the works included when displayed together this way?

HUYGHE If I had designed and scripted this show perfectly and created an over-arching narrative, there would be surprise, no accidents, nothing I could learn from it, and that’s boring to me. If there are accidents, things I don’t control, changing dynamics, then the exhibition evolves as an organism—and then being there is also a moment where I myself discover things, and that is very important to me. If I didn’t have that, I would not even know why I do any of this. I might as well have planned the show two years ago and then gone to sleep until the opening.

At one point, the exhibition was closed for a day and I found myself alone in the space—and I experienced things that I had never planned on paper, correspondences that appeared and emerged. The co-presence of the works was generating something other than the sum of what they are, an auto-generating process. In this show the works confront each other and make connections that are very new for me. When I see them physically working together in time, changing and growing, then that’s the moment when I myself become a stranger from my own work, in the sense that there is a part I do not know. All my work is about producing this non-knowledge zone, this continuity between fluid and porous elements that can never be entirely anticipated. That’s what I experience, and that’s what I want for this retrospective. Otherwise it’s defective.

Summer Lee Is Coming to Congress — and to The Squad