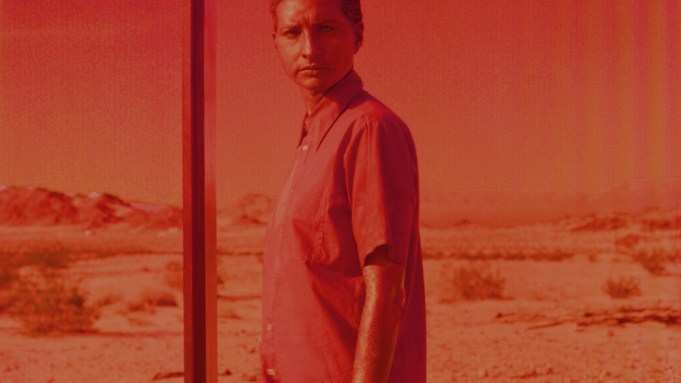 Numerous science-fiction tales have speculated about life on Mars. Such fantasies may become reality as soon as 2026, as corporate investors fund expeditions to the planet. In “The Interview: Red, Red Future” at the Contemporary Art Museum Houston (Feb. 27-Jun. 5), the artist MPA takes the impending human colonization of Mars as a departure point for a series of photographs, sculptures and an interactive installation.

Known primarily for her performances, which she has shown at venues such as the Stedelijk Museum in Amsterdam and the Getty Institute in Los Angeles, MPA explores the body as an energetic presence and a political force. “The Interview” showcases her work in other mediums. Photographic collages like Mars (2014) collapse images of the Marine Corps Air Ground Combat Center near the artist’s home in the California desert with those of Mars, making an explicit connection between military power and the planet named for the Roman god of war. The interactive installation The Interview (2015) includes a telephone receiver that visitors can use to speak to MPA, who will be available during most of the exhibition’s opening hours, about the planet. Questioning what information shapes belief, MPA merges scientific rationality with fantastical speculation. She spoke to A.i.A. over the phone about her process of mapping unknown terrains.

RISA PULEO  How did you come to the planet Mars as the subject of this exhibition?

MPA  Three years ago, I learned about Mars One, an organization based in the Netherlands that has proposed sending 18 people to Mars by 2026. If successful, it would beat NASA’s plan for a manned expedition by 2030. It’s a one-way ticket. Participants are expected to start the first human colony there. Mars One wants to broadcast the project online and spend advertising revenue on resources for the colonists. This was a bit shocking for me at the time. I’m less interested in the mission’s success than I am in observing a new tale of colonization playing out in the cultural imaginary. It made me curious about what’s on Mars, and who dreams of going there.

Around the same time, I moved from New York to the desert of Twentynine Palms, Calif., which is next to the largest U.S. Marine military base. The skies caught my attention with stunning sunsets, drone traffic and mysterious flares in the night. This show comes out of my observations of these surroundings.

PULEO  The title of the show reminded me of your 2012 performance on Fire Island, Preparation for a Red Year: Three Emotive Acts, in which you performed actions connoting the emotions of lust, jealousy and anger as they ebbed and flowed into one another. How does the color red function in your work?

MPA  Preparation for a Red Year was a quick response to what I was feeling at the time. But in retrospect, it does look like a preface for what became many years of red. The performance was about what I think of as red emotions, those that produce passion, sex, revenge, aggression and violence. It was about seeing red and being coated in it. In my new project, I consider Mars as the astrological ruler of those experiences.

PULEO  You often use your body in your work but you are physically absent from this exhibition, present only through your disembodied voice on the telephone in The Interview. How do you negotiate the energy of your presence, or in this case, your absence?

MPA  I was trained in theater to acknowledge energy between people because that’s the key to performance. In my past work, I attempted to activate intimacy with the audience. Now I’m interested in how objects can transmit energy or create direct encounters with unknowns as they do in The Interview. The telephone line can be the vehicle for an intimate conversation between strangers.

A human voyage to Mars would bring new aspects to issues of bodily presence. Perhaps the increased use of Skype and other Internet telecommunications have prepared people for communicating with loved ones in space. But the status of Mars One as a one-way journey seems to redefine concepts of the afterlife. Participants are not dying, but they are leaving life on Earth. What would it mean to call beyond Earth’s orbit to contact a body that is no longer earthly?

PULEO  In the exhibition, when audience members pick up the  receiver that connects them to you—wherever you may be—you ask two questions: “Have you ever thought about life on Mars?” and “Have you ever thought about living on Mars?” After three years researching and preparing this project, how have your thoughts about Mars changed? What are your answers to these questions?

MPA  I began this project by thinking about Mars as the next phase of colonization. But what’s out there is already here. In other words, asking each other about our ideas concerning imminent ventures to establish human settlements on Mars is an investigation of our own imaginations. The colonizing project is one of the colonized mind—a mentality dominated by the entanglement of patriarchy, white supremacy and capitalist systems of value. My project analyzes the production of scientific knowledge to manufacture singular “truths.” As I began looking at reports by UFO investigators and, in particular, at the Nazca lines in Peru, I became more interested in observing patterns and less interested in finding answers.

PULEO  Much of the work makes the invisible visible. For example, in CODEX (2015), you place photographs of the Nazca lines under UV-sensitive lenses like those used in eyeglasses that darken when exposed to sunlight, which obscures the photographs while revealing wavelengths of ultraviolet light. How is this connected to your interest in the unknown?

MPA  In the last three years I’ve spent a lot of time both looking up at the sky and collecting things I see on the ground when I walk in the desert. Looking up, looking out at the horizon and looking down . . . My relationship with the unknown and invisibility is about looking.

Have humans encountered extraterrestrials on Earth? Some stories pose questions to others. The U.S. government claims that at present there is no program for analyzing extraterrestrial species or technology. That denial is already a story. The Book of the Hopi, a written account of a Hopi prophecy published in 1977, says the first inhabitants of the Americas encountered beings from the sky. The Bible calls visitors from the sky angels of God.

PULEO  There is an ongoing relationship with time in your work. In the exhibition, ISS Clock (2015) syncs the museum’s lighting to the 16 sunrises and sunsets that occur in the course of one Earth day as experienced on the International Space Station. Could you tell me about your interest in time?

MPA  Colonization hijacked time into linearity.A notion of time as spatial—rather than linear—opens up relations with multiple dimensions and with beings in different dimensional states. I believe that acting as if our choices resonate in a grander spatial time encourages a responsibility to difference, not through distinctions of territory and enemies, but rather by appreciating them as a “fund of necessary polarities,” as Audre Lorde said best in her essay “The Master’s Tools Will Never Dismantle the Master’s House.” For the catalogue I interviewed Linda Moulton Howe, a journalist who investigates UFOs. She said many of the abductees that she has spoken to mention that humans don’t realize that splitting the atom and creating nuclear bombs has had an effect on other dimensions. Linear thinking aids projects of colonialism and oppression because its means of representation interrupt other, more interconnected understandings.

PULEO  Basic shapes—the square, the circle, the line—recur in your work. In this show, for example, the freestanding sculpture Red Frame (2014)—an 84-inch-tall square—also functions as a framing device and performative prop in two untitled photographs (2014). And yet these are more than formal elements. They seem imbued with elemental properties, almost as if by ritual. How do the formal aspects of your work achieve this psychic resonance?

MPA  Energy is better felt than explained. If these forms feel energetic it’s probably because they create a moment when the mind lets go of reason and connects to an intuition of form. As a performance artist I know that people are constantly generating energy—it’s unsaid and unseen but it’s in all of our exchanges. At its best, art helps us think outside of reason, creating an intuitive sensory experience.

In the last three years I’ve had many conversations that are continued in the objects I’ve made for my landing at CAMH. It’s been an interesting process of playing researcher and tooling with facts, while making space to abandon analytic thought. I don’t have a recipe, but I view these works as a harbinger for what I am calling a red, red, future. A convenient correlate with Mars, the color red is used here to say, “Hey, it looks pretty passionate and bloody ahead. What do we think about that?”

The Maserati MC20 in Photos