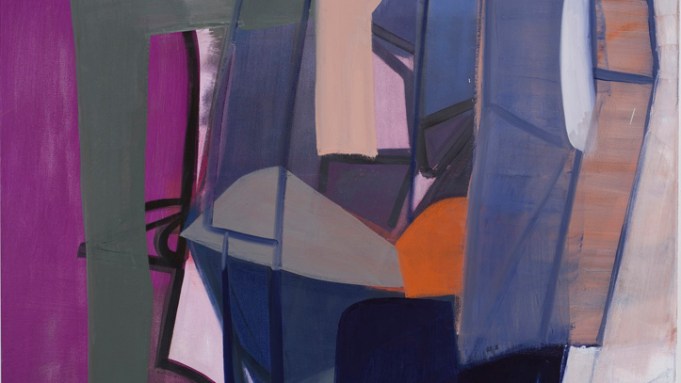 “Amy Sillman: one lump or two,” a nationally touring exhibition now on view at Boston’s Institute of Contemporary Art (ICA), is the New York-based artist’s first museum survey. The show (through Jan. 5. 2014) follows Sillman’s development from the mid-1990s to the present, as she moved from drawing to painting to moving images. Featured are more than 90 works, including drawings, paintings and zines, as well as recent forays into iPhone animation.

Sillman is known for paintings that either toe the line between abstraction and figuration or mix the two. Sillman also is an accomplished draftsperson and writer on art. Her paintings and drawings often employ a palette of bright, acid colors and engage thoughtfully with the Abstract Expressionist tradition.

Organized by ICA chief curator Helen Molesworth, the exhibition will travel to the Aspen Art Museum and to the Center for Curatorial Studies at Bard College, Annandale-on-Hudson, N.Y.

Sillman, 57, talked to A.i.A. by phone recently about her early career and about the experience of mounting a large museum exhibition.

CAROL DIEHL Did you always know you wanted to be an artist?

AMY SILLMAN I didn’t know I was a painter and didn’t know what I was going to be. I was interested in language, so after high school I traveled, studied Japanese and dropped out of college once before enrolling at NYU to study Japanese language and literature.

But I also took an art class-and that was it. It was a drawing class, all about nudes and making marks, cutting things up and moving them around. I decided to go to art school because I thought, If this is what we’re going to do all day, it’ll be fun. I went to the School of Visual Arts [SVA] because a teacher suggested I study illustration, which I did for a minute. But illustration wasn’t as interesting as the fine art department.

DIEHL What sort of work were you doing then?

SILLMAN My work at school was a proto version of what I do now, adding layers as I go, always changing my mind, altering things and wiping them out. By the time I graduated I was making huge wall paintings with tiny objects in front that I coated with white acrylic, and other very simple images, sometimes painted right on the wall-like a tiny campfire and a giant painting of a brick wall. I liked those works.

Rafael Ferrer was one of my teachers, and he told me I had to make a decision between figuration and abstraction. I thought, Why? I said to a friend, “Can you believe this guy told me I have to decide between these two things?” It was good because he threw down the gauntlet and prompted me to define what I was doing.

DIEHL How did the teaching aspect of your career come about?

SILLMAN For 11 years after college I worked in my studio and, to make a living, I did paste-up for magazines. I wouldn’t call it a career, but paste-up was fun-it was convivial. However, around 1990 computers took over. So I called Rochelle Feinstein, who was teaching at Bennington, and said, “I don’t know what to do for a living; do you think I could teach?” I liked teaching because it was also conversational. I thought, If I like this I should go to grad school.

DIEHL How has the experience of mounting the retrospective changed how you think about your work?

SILLMAN There was a long period when I didn’t show my work. Exhibiting changed things in that it gave me more understanding of architecture through the literal experience of working with, or toward, spaces external to my apartment. When you know you’re going to have a show, you make the work for the experience of the gallery, and it automatically becomes more conceptual because you’re imagining that destination as the visual container. So I began to think about what would happen when people interacted with the works. How would they walk through the room? Would they see a lot of little things or the whole? I realize now it’s something I’ve always considered-the importance of sequencing, and how the viewer, walking past a bunch of drawings, might become an animator.

DIEHL Isn’t some work of yours being exhibited for the first time in this show?

SILLMAN There’s a wall of collage-drawings at the end that I haven’t shown before.

We cut out some paintings and put the drawings in instead since the show is so much about drawing. The whole subject of the show is drawing, really.

DIEHL So what relationship between drawing and painting is expressed in this show?

SILLMAN I’ve done a lot of drawing, but it’s not always sketchlike or predictive of the next body of work. Sometimes a body of work concludes and then I’ll do something completely different in drawing than I’m doing at that moment in painting. Sometimes the drawing just cuts in. The show portrays a lot of different forms of work. There’ll be portraits after a bunch of abstractions, or cartoons after a body of increasingly abstract painting. So things are often contradicting, not developing on an even line.