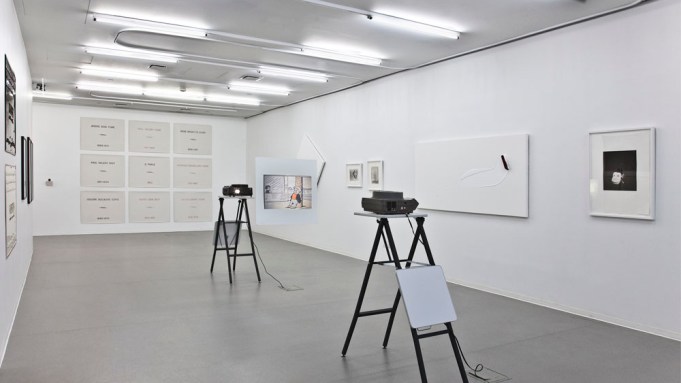 Liliana Porter says she knew Marcel Broodthaers’s work only superficially before being paired with him for “The Incongruous Image: Marcel Broodthaers and Liliana Porter,” an exhibition on view at the New Museum, New York, through July 3. Small and focused, the show includes eight works in a variety of mediums by Broodthaers (1924–1976)—including his projection of 33 slides, Sex Film (1971–72)—and 20 prints, drawings and paintings, from 1968 to 2011, by Porter.

Strong affinities between the two artists were quickly discerned, however, by guest curator Tobias Ostrander, who in 2009 had organized an exhibition of the underknown  Porter (b. 1941) at the Museo Tamayo in Mexico. (He is presently curator at the contemporary art venue Museo Experimental El Eco in Mexico City, and co-organized the New Museum show with Annie Fletcher of the Van Abbemuseum in Eindhoven.)

Broodthaers and Porter are both deeply influenced by Magritte, who questioned the necessity of a relationship between objects and the words that name them. The objects that Broodthaers and Porter appropriate feel oddly out-of-date, and time seems to stand still—or move at an odd pace—in their films and videos. Both artists can assume the role of didact, though their teaching is unmoored from any commonly agreed upon knowledge.

Above all, the juxtaposition of incongruous codes of representation in both artists’ oeuvres fosters an atmosphere of disorientation or bafflement-and no small degree of wry humor. One need only contemplate, in this exhibition, Broodthaers’s Les animaux des fermes (1971), in which an appropriated pictorial chart of cattle substitutes the names of cars for the various animals, and, by Porter, a photograph showing a toy penguin conversing with a bust of Christ (Dialogue with Penguin, 1999). In these and other works, logic is abridged with absurdist results.

Born in Argentina, Porter has long lived in the United States, where she makes paintings and prints combining traditional mediums with collaged elements, usually small toys. Over the past decade, she has created photographs and videos that feature the toys; the videos are scored with extraordinary musical compositions by the Uruguayan-born composer and singer Sylvia Meyer. (For an example, see Rehearsal, a project Porter created for the Dia website in 2008.)

Though she spends most of her time working at her studio in Rhinebeck, New York, A.i.A. caught up with Porter at her Manhattan apartment on May 26.

FAYE HIRSCH: Were you surprised when Tobias Ostrander and Annie Fletcher got in touch with you about pairing you with Marcel Broodthaers at a show at the New Museum?

LILIANA PORTER: They asked me for images, but I didn’t know for what. And suddenly Tobias said, “How do you like the work of Marcel Broodthaers?” He’s one of those artists you think you know, but you realize you really don’t know him—the name, and maybe two or three works. But I must confess I didn’t really know him deeply.

HIRSCH: So he didn’t influence you, when you were young?

PORTER: No. Well, I knew his work, but not like Magritte’s. So I bought books and I started to study, and I was so happy. I really discovered a lot of connections, besides the superficial ones-that we both like Magritte, for example, and that we share imagery. But there is something that is more essential. It is a position you take in front of reality—about how you read or question reality. That is what interested me the most.

HIRSCH: And something you’ve been considering your whole career.

PORTER: Yes. Maybe his work is more hermetic, from a certain point of view, and mine maybe more accessible. Many things are different. But, for example, I couldn’t believe his use of the boat. And even his use of film. My videos don’t move, really. They are segments, and they have a title, and the titles are very important. In Broodthaers’s A Voyage on the North Sea [1973–74], he’s filming a painting. And the time that passes is also the time of the film. I felt very connected with that. To this still scene he added the element of time.

HIRSCH: I wonder if he’s not more directly coming out of Surrealism than you are.

PORTER: He’s a step beyond Surrealism. It’s like the part of Magritte that’s not surreal-where he changes the names of things, for example. Maybe it’s presumptuous to use the word “we,” but . . .

HIRSCH: Well, the New Museum put you in the show together! You may as well use it.

PORTER: We—Marcel and I—were interested in that part of Magritte for the same reason. What Magritte is doing is separating the thing from the name, making you aware of the fact that things don’t come with a name. The closer you get to the thing, the more it collapses—the less reality it has. Broodthaers was interested in Duchamp, but what he does is different. Duchamp takes the shovel and puts it in the context of art, so that you see it as an art object. Broodthaers makes you think of the shovel itself, inside the art context.

HIRSCH: I don’t quite understand.

PORTER: Broodthaers is going in and out of reality. He is a little more perverse than Duchamp. The art context gives the object permission to be inexplicable or mysterious, but the object is just as mysterious or inaccessible inside or outside the art museum. In everyday life you make an order of things. You have a dictionary—which is very soothing. I love that. But at the same time even a dictionary, which is so rigid, is very surrealistic.

HIRSCH: What does a boat mean to you?

PORTER: It started—in 1968—with the idea of the traveler, of going from one place to another, and with life-passing from one situation to the next. But for me it is also salvation. I don’t swim. I started making a boat during a bad time. I was reading Alice in Wonderland, where Alice cries and then she becomes very small and almost drowns in her own tears. So I did a print with that page of the book open. It has a little boat on top of the book.

So the boat started there, as a metaphor. Perhaps it’s a little corny. And I must confess that the painting, Untitled (ship), which is the latest work in the show [2011], was influenced by Marcel.

HIRSCH: Could you explain the human and animal figurines and toys you choose for your work?

PORTER: They are familiar objects, and so strong as symbols that it is impossible to take meaning away from them. I once did an image—a print, and also a painting—called Drawing with Plastic Hammer. It’s the Communist sign, of course, which you recognize. But at the same time you realize it’s just a drawing; the hammer is a toy hammer. You can make it banal, or you can fill it with meaning—it’s all the same.

HIRSCH: The toys seem a little anachronistic, as if from another time than ours altogether.

PORTER: I find them in flea markets and places like that. The ones I like best look like they are, in general, from the ’50s. Probably I played with them, and the things you play with as a child are engraved in your brain. I don’t alter them in any way—I don’t have to. They act by themselves.

HIRSCH: They’re often shown being overwhelmed in some way, even humiliated. But they retain a certain dignity despite it all-you leave them intact, for one thing, and they always have plenty of empty space around them, which somehow gives them a feeling of freedom.

PORTER: They look a little perplexed. When I go to the flea market, I know which ones I want. I wasn’t aware of why I chose them initially, until I looked at them all, and I realized they all look like they are saying, “What is going on!?”

HIRSCH: I wonder if that look of perplexity, or even innocence, isn’t their protection in some way. And they are never merely cute. I find that to be a quite a feat.

PORTER: Personally, I am something of the optimistic type. I would never create circumstances in which there isn’t a way out. You may not understand, but an explanation exists. To me, that is enough. For instance, you are in the subway, and there is a Chinese guy reading a Chinese paper next to you. You look at the newspaper, and it is as if you are blind. You can’t read it. That is a metaphor for a lot of things that we don’t understand. We just don’t have time to get to an explanation for everything. But that lack of knowledge is what makes us do art, do anything—it is the motor of life. If we were to arrive at a final explanation, we would not have to think any more.

HIRSCH: What role does humor play in all of this?

PORTER: Humor is what allows you to survive. Not laughter-but humor as the indication of a conflict between knowing and not knowing. I always thought the structure of a joke is similar to the way one makes art. You have something logical, and suddenly something else comes along that is in a totally different code. Art does the same thing.

HIRSCH: That levitating rabbit on the line paper (Conejo que Levita, 2008)—it’s barely more than a line itself.

PORTER: Well—there’s a shadow. The levitating rabbit appeared a few years ago. It’s about the possibility of being on top of all this mess, but still being able to take it easy. The rabbit is exhibited with two other drawings—one is a torn page that I’ve sewn up, as if to say, well, you can fix it [Untitled (Stitches), 2008]. And the other is of a little guy looking forever at one thing-a jewel [collaged to the page]. Usually I draw a little dot [for a figure to stare at], but for this one I chose a jewel, so it looks more important. I called the drawing To See It [2008]. But to see what?

PORTER: Well, I suppose I am something of a domestic philosopher.

Drink Up: This Lavish Private Jet Trip Takes You on a Monthlong Tour of the World’s Best Distilleries