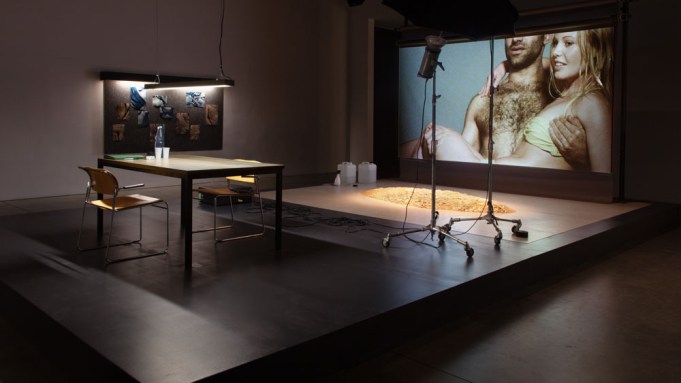 One’s first inclination on entering “Studio Pietà (King Kong Komplex),” London-born, Berlin-based Simon Fujiwara’s first New York solo, is to step up on the central platform and look at the photographs and maps piled on the desk there. If you’ve read the press release, you know that the exhibition details the artist’s quest to re-stage a photograph of his bikini-clad British mother cradled in the arms of a Lebanese man, taken in the late 1960s on a Beirut beach, long before the artist was born. She was a cabaret dancer; the man was likely her boyfriend. The documents seem to promise more information. But mounting the platform is not allowed.

That’s not because the materials on the desk are precious—there’s also a pile of sand, two jugs of water and lights on tripods as if set up for a photo shoot—but rather because Fujiwara doesn’t want you to have access to all of the materials he used to create the work. “Part of the point of not showing every piece of evidence is that the viewer is constantly outside of the truth,” Fujiwara, 30, told AiA over coffee at the Hotel Americano in Chelsea last week. “With a project like this, which is based on a real life story, you have to choose how much you want to tell before it becomes really personal, and how much can remain so that it can still be universal.”

Fujiwara also chose not to show the original photograph. Instead, the platform is a re-creation of his studio in Berlin, where he cast and photographed the actors who would play his mother and the mysterious Lebanese man. “It shows that even though you don’t know all of the facts about what’s gone on, the event of re-staging the photograph is not a made-up fantasy,” he said. The story thus shifts from being about his mother to being about the artist and his work.

On the walls surrounding the platform are bulletin boards, one sporting photographs of fragments of a marble statue, another with images of the Middle Eastern-looking actors and pretty blondes at the casting call. A final board contains photographs of the beach in Beirut where the photograph was taken, along with images that suggest a more sinister side to the story—a man aiming a machine gun, a tank rolling down a street.

On the back wall is projected a 20-minute documentary video in which, over footage of actors arriving at the casting call, Fujiwara conducts an interview with himself about the process of making the work. “I wanted viewers to feel like they were listening to a conversation rather than being told a story,” he said of the format. For the self-interview, he offered only an opaque explanation: “To question myself was the only option.”

The video fleshes out some of the problems Fujiwara faced when making the work. (Without it, the installation itself would look something like a war bunker.) Among them, the difficulty he had trying to cast an “Arab” man to play his mother’s companion in the photograph.

Many of the actors who auditioned were accustomed to being typecast as terrorists, Fujiwara explained. One apologized for his “Al Qaeda” beard. Despite the artist’s best intentions, prejudice was something he had to deal with on a personal level. “I look at the original photograph, and I see a dark, scary-looking man who is sexy but dangerous,” he said. “But if you’re being politically correct, you can’t say Arab men are dark, hairy, sexually attractive and scary.”

But Fujiwara’s fear is also based on the discomfort he felt when he first saw a picture of his mother held by a strange man—though his reaction then wasn’t necessarily based on race, but rather on a certain sense of protectiveness, or even jealousy. “As a child, I said the exact things a terrifying bigot would say about the photograph,” he says.

Judgments about prescribed roles are further challenged when viewers come upon a triptych of photographs in a back gallery. One shows the woman Fujiwara cast as his mother, standing alone, her empty arms outstretched in anticipation of holding something. One depicts the Arab man being cradled by the woman; because she can’t support his weight entirely, he is dangling in a harness supported by wires. A final photo shows the grinning man hanging by himself, one arm flamboyantly outstretched.

“Quite early on I decided I wanted to reverse the roles,” Fujiwara told me. “Of course, it looks ridiculous. But it also gets people immediately engaged in the piece. Everyone can understand the joke on the surface.”

If the viewer delves further, the first part of the show’s title, “Studio Pietà,” comes into focus. “Once I thought about this idea of a man being held in her arms, I tried to think of famous images to root it,” Fujiwara said. “The Pietà became a false justification.”

To heighten the Christian undertones, Fujiwara added a bench to the back gallery. “Whenever there’s something important or spiritual in a church or a museum, there’s a bench in front of it,” he said. The bench, he says, compels you to spend time in front of photographs that he sees as basically worthless. “They just show the process of creating the image—they could almost be stock imagery.”

Fujiwara leads the viewer down a number of blind paths, in hopes that by doing so, he raises uncomfortable questions about race, sexuality, gender and religion. In the context of a New York art gallery, where almost nothing is taboo, they may not be that discomfiting. Still, you leave with an image of his mother and her Lebanese lover imprinted in your mind’s eye, as if the document had been available to you all along.

Ferrari’s First SUV Now Has a Two-Year Waitlist, So the Brand Is Pausing Orders

A Visit to the Brooklyn Museum With Smino