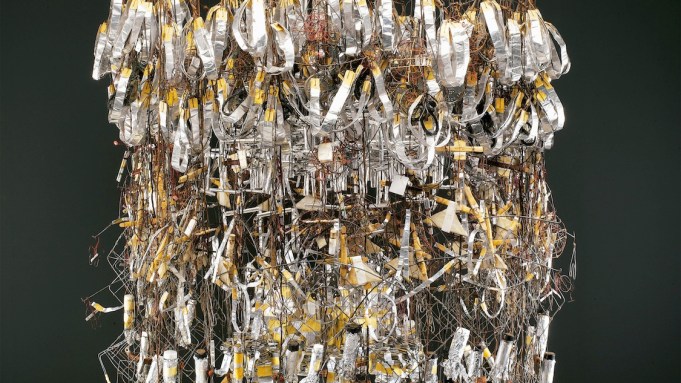 Massimiliano Gioni toys with the art world. In 2002, together with artist Maurizio Cattelan and fellow curator Ali Subotnick, Gioni founded the Wrong Gallery: a space in New York’s Chelsea district only three square feet, where, in his words, “nothing was for sale.” Gioni’s burlesque of the white cube garnered the art world’s praise and led to prominent curatorial positions, including the directorship (along with Cattelan and Subotnick) of the critically lauded 2006 Berlin Biennale. Currently associate director and head of exhibitions at the New Museum, Gioni has mounted some of the venue’s most conceptually rigorous shows, such as last year’s survey of art from the Eastern bloc, “Ostalgia.” In 2013, at age 40, he will serve as the youngest director in the Venice Biennial’s over century-long history.

Gioni’s current effort at the New Museum, “Ghosts in the Machine,” co-curated with Gary Carrion-Murayari, is an eclectic vision. The show boasts a broad temporal and geographical reach, with works dating from pre-modern to present-day and hailing from such locales as Japan, Venezuela, and the American West. Hans Haacke and Paul Sharits appear alongside lesser-known artists, such as the kinetic sculptor Gianni Colombo, and figures from popular culture, such as cartoonist Rube Goldberg. Work by self-taught artists and the mentally ill features prominently, as do non-art objects: notably, Wilhelm Reich’s Orgone Energy Accumulator (1940), an elaborate box once touted as a tonic for an array of ailments but destroyed en masse by the US government. Several artworks, otherwise confined to the pages of catalogs, are ambitiously reconstructed on the occasion of the show: among them, Richard Hamilton’s 1955 installation, “Man, Machine and Motion,” a photographic pastiche of cars, astronauts, and deep-sea divers mounted to architectural metal supports, and Stan VanDerBeek’s “Movie-Drome,” an immersive cinematic environment originally built between 1963 and 1966.

A.i.A. spoke with Gioni over the phone about his unorthodox approach and his debt to curators past.

COURTNEY FISKE What was the inspiration for “Ghosts in the Machine?”

MASSIMILIANO GIONI Although the show centers on technology, it also examines how artists and thinkers have tried to analyze the way we see and the act of vision. That problem has always interested me, and this show was a way to tackle it again. A further inspiration was the desire to showcase artists who are left outside the canon. There’s a polemical position that runs throughout the show-if you want, it’s also part of the New Museum’s mission-and that is to show artists who aren’t often shown, to bring in information that’s fresh. The show concentrates on those positions in recent and contemporary art history that have not been assimilated by mainstream historical narratives, such as optical and kinetic art.

Lastly, there was the inspiration of the many shows that preceded this one, particularly Harald Szeemann’s “The Bachelor Machines” (1975–77) and K.G. Pontus Hultén’s “The Machine as Seen at the End of the Mechanical Age” (1968). Because “Ghosts in the Machine” tackles such broad themes, incorporating these past exhibitions was my way of saying, “I’m not doing this alone.”

FISKE The show’s debt to such exhibitions is quite explicit. I think, for example, of the inclusion of Kafka’s Harrow, commissioned by Szeemann for “The Bachelor Machines” and inspired by Kafka’s short story, “In the Penal Colony.” Why was it important to reference these past shows so directly?

GIONI I didn’t see these shows myself, only in photographs. Because you can’t see them in person, you bring them back so that you can see them. By remaking these shows, you learn not only about specific artworks, but also about how people displayed and looked at art. This is an idea that interests me more and more. There is not only a history of artworks, but also a history of the way in which those artworks were presented, staged, and exhibited. I think that there is a lot to learn from past exhibitions, when people were trying out different things, because the way shows look today can be quite repetitive and homogenous.

Szeemann’s “The Bachelor Machines” interested me not only because of its premise, but also because entire artworks were recreated for the show. That’s why the inclusion of Kafka’s Harrow was so important, because it signifies an approach to exhibition making that is very radical and unusual. Basically, Szeemann went with a drawing of a model to an artisan and asked, “Can you build it?” The object didn’t exist, so he made it exist. It was an artwork born out of the desire to see it.

FISKE You’ve described your approach to “Ghosts in the Machine” as that of a “cabinet of curiosities,” where art objects are grouped with non-art objects, in lieu of a more conventional, chronological organization. What was the logic behind this strategy?

GIONI Well, the way we look at art today, not just in New York but in general, can be a bit reductive: we put beautiful things on the wall and we look at them basically because they are beautiful things. But if you visit the historical galleries in ethnographic or encyclopedic museums—for example, the Metropolitan Museum of Art—there is an approach to the display of art that is much more open and complex. It’s not just masterpieces on view, but applied art as well. In the Met’s new Islamic wing, for example, there are reconstructions of houses and courtyards. There, we look at objects as symptoms of a particular understanding the world.

The notion of what we can show in a museum expands when we understand artworks as cultural relics or documents, and not simply as artworks. In that confusion, there is something very valuable—something very valuable to me at least. Because, with this perspective, you’re not just looking at artworks: you’re looking at stories of people and experiences of the world. In a sense, “Ghosts in the Machine” is about moving beyond the idea of “good” and “bad” art and the museum as place for the display of masterpieces. It’s about looking at objects-some of them artworks, some of them not—and seeing if they provide an understanding of our relationship to machines, if they teach us something.

FISKE Speaking of collapsing categories of “good” and “bad” art, the show’s heavy representation of Optical art is intriguing because that movement has largely been written off by art historians as an aesthetic of mass appeal but little critical interest.

GIONI I wanted to look at Optical art and perceptual abstraction as the ghosts or black sheep of art history. These were moments in which artists explored the human body through abstraction, which I think is quite unusual and relevant for art today. “Ghosts in the Machine” is very much directed to artists, especially to younger artists. It aims to say that, first of all, the vocabulary of art is much larger than we often think and, secondly, that there is an utopian intention in many of these artworks, which now perhaps seems romantic or passé, but which at the time had an integrity and a desire to address humanity on a deeper level. These works are worth revisiting today because I think that we need to recuperate that sort of motivation: the notion that art is made to understand humans and the body and, ultimately, to program the future differently.

FISKE “Ghosts in the Machine” largely avoids the dominant styles of the 1960s: namely, pop (with the exception of proto-pop pieces by Richard Hamilton and Eduardo Paolozzi) and Minimalism. The show also bypasses other modernist movements with machine-driven aesthetics, such as Futurism and Constructivism. In so doing, “Ghosts in the Machine” seems to propose an alternative art historical narrative, especially for ’60s art.

GIONI In the catalog, I write about Deleuze and Guattari’s idea of a minor literature and minor histories, which very much inspired me. The show is polemical, though hopefully not in an overly didactic or in-your-face sort of way. It’s about showing that there are many different ways of being an artist and many different voices, beyond just the canonical ones. Instead of imposing an alternative narrative, I hope that the show points to a polyphony of voices and shows that they are all worth listening to. History is never one unequivocal narrative. It’s made not by heroes, but by slow process of sedimentation.

FISKE Duchamp’s The Large Glass (1915–23) provides one of the show’s conceptual anchors. Beyond being physically present in the form of a model for Ulf Linde’s 1961 replica, the work’s triangulation of machine, body, and eroticism informs the vision of many of the artists represented. Why does The Large Glass sit so centrally within the show?

GIONI The Large Glass is perhaps the first contemporary artwork that comes with an instruction manual. Duchamp made his notes for The Large Glass to be almost as cryptic and confusing as those terrible booklets that machines come with. It’s an artwork that tells a story, and “Ghosts in the Machine” is an exhibition that plays with storytelling: for each artwork, there is a story included about the artist and its origin. It was inspiring, too, to think of the tradition of artists-Richard Hamilton among them-who rebuilt The Large Glass as though it were machine, by following Duchamp’s instructions. That, in turn, informed the show’s many reconstructions, such as Stan VanDerBeek’s Movie-Drome (1963–66/2012) and Richard Hamilton’s “Man, Machine and Motion” (1955/2012). The idea of the reconstruction connects back to Duchamp and his fascination not with the original, but with the copy.

FISKE What is the importance of the outsider artist in this show?

GIONI The moment something new appears, our reaction is often to identify novelty with a kind of madness, and “Ghosts in the Machine” is, in part, a show about insanity. The inclusion of outsider artists and the experience of the schizophrenic was important because they present a visionary representation of technology that, in some cases, presages what technology is today: something invisible and hidden under our skin. Ultimately, the show looks at the artist as type of mad scientist. Sometimes the mad scientist is right, and sometimes he just goes mad and his inventions don’t lead anywhere. I find many of these works endearing because they are tiny machines that constantly break down. They don’t do much, and I think that’s both humorous and depressing. It’s a metaphor for the artist as Duchamp’s bachelor: an unproductive creature who repeats the same cycle of discovery and useless realization over and over.

FISKE Why do you think that so many of these artists and movements have been forgotten by history?

GIONI Part of the reason why some these artists are forgotten today is because technology went in a completely different direction. They thought that technology was a separate entity from us. Even though through the discourse of cybernetics and information theory, they thought the brain and communication could be described as machines, they still conceived the machine as something bulky. None of them, except maybe [British science-fiction author and collagist] J. G. Ballard, imagined that technology would literally go under our skin. Most of these works were made in a time before the microchip and deal, in a sense, with the pre-history of the digital. When technology becomes immaterial: that is another chapter, for another show perhaps.