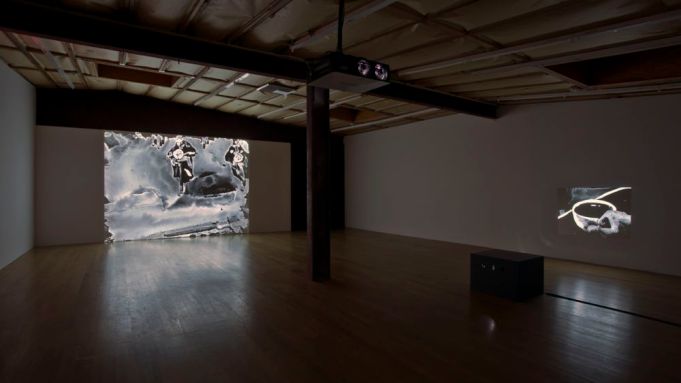 The title of Matt Saunders’s current show, “China in Nixon” [through Dec. 22 at Blum & Poe, Los Angeles] turns the title of John Adams’s 1972 opera into abstract absurdity. The title’s inverted place and figure, references performers who are improbably filled, indeed enlivened, by space.

In silver gelatin prints, the artist portrays the 1920s European actress Asta Nielsen, The Prisoner actor Patrick McGoohan, and Al Pacino. Stills of each in poses of mannered contemplation are rendered through the layering of materials: paintings of oil on linen, photographed and worked over with development chemicals that unevenly expose the image, melding figure with ground. Spray enamel overlaying Patrick McGoohan (Cigarette) #2 (2010–11) mimics the granular quality of canvas, while acetone bleeds the surface and enamel to create dried rivulets of black down the image. These figurative representations are distorted by the mediums of their making.

The show includes two films: China in Nixon (2011), a wall-size projection; and Field Day, projected intimately to simulate private viewing experience. The ink on Mylar stills, edited into flickering moving images, depict clips from the TV shows Danger Man (1960–62) and Twin Peaks (1990–91), Bertolt Brecht’s film Kuhle Wampe (1932), Rainer Werner Fassbinder’s World on a Wire (1973) and footage of Richard Nixon on the tarmac in China in 1972, among other sources. The dark underbelly of politics on the scale of the personal, filtered through the genre of melodrama, unite these works. Fragments of scenes flare up to the surface as the artist’s wide washes of ink sharpen into figures in motion, falling away again into visual static almost as soon as they are discerned.

PAUL SOTO  Could you tell me about the individuals depicted in your photographs here, and what qualities, if any, that they share?

MATT SAUNDERS  I’m drawn to figures who have complicated, ebb-and-flow types of lives or careers. There is Asta Nielsen, subtle actress and great European star of the Silent age, who founded her own production company in order to film Hamlet, starring herself in the lead role. Then there is Patrick McGoohan, who recently died. He is someone I grew up with watching on reruns of The Prisoner, which he starred in after leaving the series Danger Man unexpectedly in the 1960s. He tended toward escape; he eventually left The Prisoner, then became a sort of misfit transplant in Los Angeles. He was always a bit off the map and controlling in his career. There is also an early Al Pacino from Panic in Needle Park, which is something I was moved by recently. I just watch these things and certain images come to the surface for me.

SOTO  The approach is personal, then, in that you have had an initial experience of these actors in film, while the re-experience of these images is now inlaid with the context of their personal histories. Could you tell me why you have selected predominantly film actors to depict?

SAUNDERS  I’m interested in the private experience of a performance and its mediation. These are singular moments of a captured performance as I experience them through the medium of film, television, video or still photograph. The changing time in the film, my changing relationship to the image over time, and the place of that performance in all the unrecoupable parts of their lives are all time-based processes that I engage in the work.

SOTO Your changing relationship to these images is echoed in your laborious process. In your films, for example, you make many of these paintings and drawings, which you string together in a moving image. These images repeat serially, though always contain slight differences in order to depict motion. Yet the motion in the two films here is often interrupted by an inversion of their tonality.

SAUNDERS  There is certainly a relationship among some images in the film and photographs, as there is from one frame of a film to the next. Wedging yourself between two pictures, or between two frames of a film, is important to me. In these films, I employ the flicker, because it lends an insistent physicality to the light and to the rhythm. I am always trying to add friction or interruption to the process of representing this subject matter whenever it seems too straightforward. I would hope the photographs could be, in ways, a very slow film, unfurling in a weird processional.

SOTO  The weave of these canvases onto which you’ve painted, and the overexposure and underexposure of their photographs, seems to create that interruption here. Would you say that you vary the use of these elements depending on the specific meanings that each of these film stills have for you?

SAUNDERS  This particular show is consistent, in that all the photographs capture some combination of oil and linen. The approach and materials are so central to the final picture that they are inseparable, in a way, from the image I am working with. Though the material stays the same here, the approach varies among subjects. In the two “Hamlet” pictures, for instance, the images are of this lone figure lost in thought.  I wanted the figure to merge with the atmosphere in photographic space. I accomplished this by painted using the chemicals in the darkroom, which I wanted to be very transparently visible. I selected very grainy, textured linen for support, leaving it unprimed so that each individual thread is visible. The images were painted very thinly with white, and lets a little light through when the photographic paper is exposed. For a dramatic, high-contrast picture, like Patrick McGoohan throwing open the doorway (in the original film, this is accompanied by a thunderclap), I used thick linen, primed it with gesso and actually drew the figure with black ink, which is more opaque than the white. So the image takes a strong exposure and comes out more extreme.

SOTO  The support you used for Panic (2011) is very different from the others. The image of Pacino and Kitty Winn lying on a bed looks like it is embedded in an Op surface. Are you referencing the physical distortion that arises when these images are mediated over and over?

SAUNDERS  That’s absolutely right about the different support. I guess this gets back to your question before. Invariably, the weave of the linen works in places like a raster or pixel. I’ve been really interested in how this most basic physical quality (weaving) can echo the TV screen or the digital. I order different types of linen (by no means all proper “artist’s linen”) because it can be such a big part of the image. I found this very thin linen; I think it’s literally ecclesiastical linen, like for tablecloths, with that structure—almost a fat pixel grid. For that picture I wanted a sense of the room, of its atmosphere, which is one almost of surveillance. That particular linen is so thin that the painting had to be incredibly light. The whole register of the image stays close together, yet the structure is so strong.

SOTO  These photographs depart from your earlier work, in that their surfaces have a very amorphous quality, due, I think, to the way that they are developed. That opacity seemed to be confined to a painted effect over your figures in the past, which you captured clearly in contact negatives. Here, along a single photograph, the development is very sharp in places and faded in others.

SAUNDERS  That unevenness arises from a process I’ve been experimenting with recently. Normally I would put the photographs in a bath of developing chemicals. I’ve started laying the photographs down in a dry tub and then applying the chemicals with buckets, sponges and brushes. That’s where you see some of the watery quality, the uneven developing. I’m trying to treat it like painting. Just like I want to interfere with the add-add-add-add-done quality of a painting by using it as a tool, as a new point of departure. I wanted to do something to interrupt the process of developing.