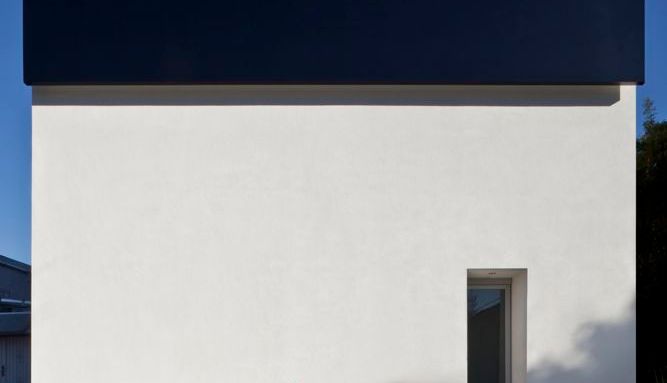 Matthew Marks opened the fifth location of his gallery (he has 4 in New York) last week on the east side of West Hollywood. Located just south of Santa Monica Boulevard, the building features a permanent architectural intervention by Ellsworth Kelly, who is also featured in the new space’s inaugural show,. The 40-feet long rectangular black form, inspired by the artist’s Study for Black on White Panels (1954) and Black Over White (1966), hovers in relief along the top of the facade’s length, a minimal gesture that is both monumental and understated.

The building, both inside and out, is as much the product of its architect, Peter Zellner, as it is of Kelly. The interior, a sizable 3,000 square feet, features six square glass skylights recessed into the ceiling. These provide shadowless daylighting to the space, in accord with the artist’s specifications. In the main space, Kelly shows six new relief paintings [through April 7]—mostly rectilinear canvases superimposed by equally colorful oblong monochromes, each parabolic form appearing to defer to an uneven gravitational pull to the left or right.

A.i.A. spoke with Marks this week about opening a space in Los Angeles, as well as his experience working with Kelly on its design.

PAUL SOTO What drew you to LA?

MATTHEW MARKS Artists want their work to be seen by other artists. In that respect, Los Angeles is an ideal place to open a gallery because there are so many artists and art schools here of a really high level. Also, many of my artists have not shown here for a long time and some, like Brice Marden and Katharina Fritsch, have never had one-person shows in Los Angeles.

SOTO Why did you choose to build in West Hollywood?

MARKS The choice of where to open was instinctual. I wanted a quiet street that was convenient. West Hollywood is between Los Feliz and Beverly Hills. The gallery is not far from LACMA.

SOTO  Why not Culver City, for example, an area concentrated with galleries that receives foot traffic?

MARKS It’s not my style to open across the street from another big gallery. I looked for the right location for a long time and when we found the site on Orange Grove, I knew it was right for me. It doesn’t worry me that there are no other galleries around mine. I hope that the shows we do will be enough of a reason to visit. Remember there was nothing going on in Chelsea when I opened there in 1994.

SOTO What role did Ellsworth have in the design of the space?

MARKS The building would not look the way it does without Ellsworth. I brought a model of the building up to his studio and asked him if he would consider making a sculpture for the outside. I left feeling a little defeated because he didn’t say yes or no. When I visited him again a few months later, I was surprised to see that he had added the black bar across the top of the facade and turned the whole building into an enormous sculpture. Ellsworth worked closely with the architect, Peter Zellner, on the details of the facade, and I think we ended up with something very special.