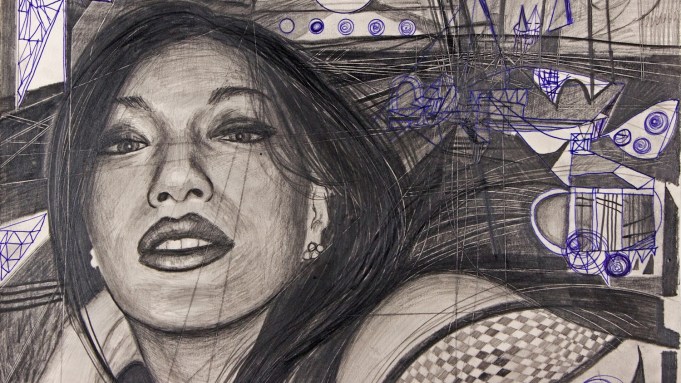 “MIE: A Portrait by 35 Artists,” on view through Feb. 25 at Freight + Volume gallery in Chelsea, is one of the more unusual group surveys of the new season, and casts a fresh light on the venerable theme of artist and model. The show includes a few star artists (Alex Katz, Robert Frank), many who have stirred recent critical interest (Ryan Schneider, Kurt Kauper, Andrew Guenther, David Humphrey), one pop-cult figure (Paul D. Miller, aka DJ Spooky) and several participants who, well-known abroad, are emerging in the West (Lin Yilin, Noritoshi Hirakawa, Qi Zhilong). Even more striking is the curatorial approach. The exhibition was co-organized by gallery owner Nick Lawrence with the portrait subject herself—Mie Iwatsuki, a Japanese-born model and independent curator who has lived in New York since 1999.

In the accompanying 165-page catalogue, Mie (mee’-ay), as she is known in the downtown art scene, offers a preface called “The Model’s Voice” and separate remarks on posing for each artist. Her reflections are supplemented by Lawrence’s introduction and short essays by critics Anthony Haden-Guest, John Yau and Peter Frank.

Just don’t expect some latter-day version of a poor shop girl lured into studio indenture or a sophisticated woman deftly victimized, Picasso-style, by a ravaging male eye and libido. Iwatsuki—who speaks Japanese, English and Chinese, and has helped organize such shows as “Drop Urban Art Infill” (2009) at a pop-up venue in Chelsea—has her own ideas on the role of the model and the core nature of portraiture.

Here she speaks out in an A.i.A. interview, alongside the show’s co-curator.

RICHARD VINE Mie, you’re not new to modeling, but I’m sure you didn’t wake up one morning and suddenly say, “I think I’ll go pose for 35 artists.” How and when did this process begin?

MIE IWATSUKI The idea originated from Nick, at a meeting about a year ago. Initially, I was working on a different project. I wanted to curate a solo show for Hye Rim Lee and was looking for a venue. Nick knew that I have posed for Alex Katz since 2005, that one of the paintings appeared on a Finnish museum catalogue cover, and that I also was doing many photo shoots with Robert Frank. One day Nick said, “Why don’t we curate a show including Alex and Robert, and other international artists, making portraits focused on just one subject. You’ll be the model, and we’ll call the show “Mie.” Once I got over my surprise, I agreed but told him I didn’t want to do a narcissistic exhibition. After all, I’m mainly a curator who’s also been fortunate enough to pose for several major artists. I wanted to bring the “model’s voice” to the project, to add a third dimension to the traditional dialogue between artist and viewer. Nick totally agreed. Later, we decided to each write about the curatorial theme, and then our proposals were combined and sent out to a great many artists. So the show was launched.

VINE The project also has a disaster-relief element. How did that come about?

IWATSUKI While we were conceptualizing our show, the Japan earthquake happened. At that time, I was working as an advisor for Japan Society’s J-Cation program—a one-day immersion in Japanese art, food, music and film. That event was canceled abruptly, and they hosted a fundraising concert instead. I volunteered, of course. When I saw all the great musicians taking part in the fundraiser, I realized that I had to do something, too. Nick immediately offered to donate 10 percent of our sales to the Japan Earthquake Relief Fund. Then we really went to work to get artists on board. Ultimately 35 of them made portraits.

VINE Lots of theorists have discussed “the gaze.” But you’ve deliberately subjected yourself to it, both in fashion shoots and in artists’ studios. How do the two jobs compare?

IWATSUKI They’re two totally different practices. I wouldn’t say that a fashion shoot is totally void of meaning; some designers and photographers also make compelling statements, as everyone saw at the Met’s Alexander McQueen show last summer. But fine art is a realm of much greater diversity and creativity. It’s much more significant to try to make history with an artist than to be forgotten with the pages of last month’s fashion magazine. Artists and curators attempt to leave some lasting impression on humanity—that is what most interests me.

VINE Did you have any historical precedents in mind?

IWATSUKI At first, we didn’t think about it; we just plunged in. It was pretty overwhelming to sit for 35 artists, most of whom I had never met before, and to write about the entire range of experiences. Some artists met me just once or even worked entirely from photographs. But others needed many sittings, over days and weeks. I really love to work that way. However, I respect each artist’s intentions and methods. My aim has been to work as closely as possible with the artists in the creation of every piece. As a curator, I want to understand their work, then to focus on the process, the collaboration.

VINE Why was it important to you to write about each and every pairing?

IWATSUKI The reason is partly personal and, as you said, partly historical. In my catalogue essay, I describe the model as a kind of shaman. I feel a sense of unity when sitting for an artist. And I want to share that with viewers. That’s why I write about hoping to revive “the romanticism of portraiture.” I’d like to go back to the Renaissance idea of a union with the reality beyond appearance. The Neo-Platonists claimed that the soul comes from and returns to a divine source: the Monad. They saw it as the first being, or the totality of all beings, the One without division. That’s what I’d like to achieve with the artist, model and viewer together.

VINE Nick, this is a pretty big business gamble. What makes you think viewers will like, and collectors will buy, multiple images of the same subject?

NICK LAWRENCE Well, Freight + Volume has been a big business gamble from the get-go, so I’m used to that. I generally don’t dwell too long on financial aspects when I select artists and organize shows. I don’t have a crystal ball for sales, but I know that strong work always gets its followers in the end. I think Mie has so much dynamism, energy and grace—and so many facets to her personality—that collectors will be drawn naturally to the uniqueness of the show. I also feel that the portrait, in addition to being a mirror, serves as a conduit to self-awareness. So I expect that the public will respond well, and perhaps discover a bit more about themselves.

LAWRENCE Absolutely! Once the word got out, the response from artists was overwhelming. I initially asked 10 artists, as did Mie, but 25 more immediately signed up. So we definitely intend to continue the project. Ridley Howard and Richard Butler have confirmed their participation, and others like Kehinde Wiley have expressed interest. I’m looking forward to a Part 2, if for no other reason than to have a chance to paint another portrait of Mie. Yes, I’m one of the first 35. It would be interesting for all of the artists to depict Mie every five years, and see how her image ages and changes. Kind of like the portrait of Dorian Gray, but hopefully not as sinister.

VINE Mie, there’s no avoiding one sticky issue. How do you respond to those who say “this show is just one big exercise in egomania. Who does that woman think she is?”

IWATSUKI For me, the fundraising matters more than anything else. At the time we started this project, thousands of people were dying in my country, and 50 workers were risking their lives in a broken nuclear plant. I was thousands of miles away, yet I wanted to help Japan somehow. At first, when we came up with the exhibition idea, I felt a little bit foolish. But then I said, “No, this is who I am. This is what I can do.” After that, I didn’t care anymore what people might think.