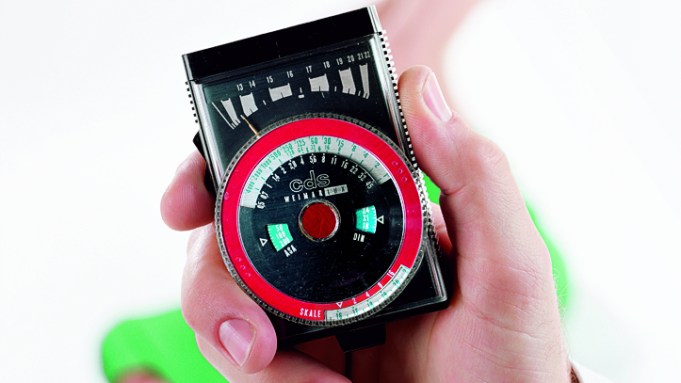 Christopher Williams has long enjoyed acclaim for his wryly incisive and playful photographs, but is only now, at age 57, about to have his first U.S. museum solo. “The Production Line of Happiness” begins its run at the Art Institute of Chicago (Jan. 24-May 18) and goes to New York’s Museum of Modern Art (July 27-Nov. 2) and London’s Whitechapel Gallery (April 2015).

Williams lives and works in Cologne and Amsterdam, as well as in his hometown of Los Angeles. His origins are in West Coast conceptualism; he studied under John Baldessari and Douglas Huebler at the California Institute of the Arts (CalArts) in the 1970s. Williams’s work targets the technologies of mass communication and mechanical reproduction by means of subtle jokes and games. His approach is typified by an image from his series “For Example: Dix-Huit Leçons sur la Société Industrielle (Revision 18),” 2013, which depicts the back of a view camera, through which we see the upside-down torso of a woman in a bra adorned with binder clips-a detail that would be edited out of a finished commercial image.

Williams’s longstanding interest in institutional critique will also be reflected in the Art Institute show, which will be dispersed across three floors and several non-contiguous spaces in both the museum’s Modern Wing and its original building.

Along with the Art Institute, MoMA is a co-organizer of the show, which is curated by the AIC’s Matthew Witkovsky, Roxana Marcoci of MoMA, and Mark Godfrey of the Tate. Witkovsky spoke to A.i.A. via e-mail about the changes and constancy in Williams’s vision, the artist’s sly sense of humor and how his work takes an idiosyncratic approach to scholarship and history.

KATHLEEN ROONEY This exhibit marks a homecoming for Williams, who had his first-ever museum showing in 1982 at the Art Institute-what piece of his was exhibited then?

MATTHEW WITKOVSKY Williams received his BFA and MFA from CalArts; his MFA thesis project, presented in spring 1981, was SOURCE…, a work that, as its lengthy complete title explains, presents rephotographed images of all the photographs found in the archives of the John F. Kennedy presidential library that were taken on a particular day in 1963 and in which the president had his back to the camera. This precise yet enigmatic work (just four framed and matted prints) was brought to Chicago the next year by Anne Rorimer, then associate curator at the Art Institute, who had been alerted to Williams’s talent through his principal teacher, Michael Asher.

ROONEY What might an audience notice about the arc of his 35-year career?

WITKOVSKY After 1990, his debt to German art grew pronounced, in everything from collaborations (with Martin Kippenberger, Albert Oehlen, Franz West) to references contained in his own works (Thomas Struth, Albert Renger-Patzsch). (It is only fitting that in 2007 Williams was named professor of photography at the Kunstakademie Düsseldorf, the position held for decades by Bernd Becher, one of his earliest sources of inspiration.) His production values became obsessive, and rather than travel the world through archival research, as he had done in the 1980s (e.g., Angola to Vietnam*), Williams literally crossed the globe in the 1990s for his subjects. His method grew to resemble that of a film director, with props, locations and, in the last several years, a studio team. His pictures have also grown substantially larger, while staying within the realm of what Rorimer called “traditionally matted photographs.” But the concentration, the spareness, the way that Williams causes photographs to take account of the space around them—these are constants across his career. Also constant are his playful challenges to museum orthodoxy, and his uncanny ability to condense multiple registers of emotion, from humor to contemplation to protest to something bordering on elegy or lament, into a single, always singular image.

ROONEY What effect is the show’s title intended to have on the reception of the work?

WITKOVSKY “The Production Line of Happiness,” suggestively conflating factory work and leisure pursuits, is taken from a phrase created by Jean-Luc Godard in conversation with a watchmaker and amateur filmmaker, and recorded for a 1976 documentary by Godard and Anne-Marie Miéville. It’s highly typical of Williams to pull obscure snippets from cultural history, particularly of the 1960s and ‘70s, and redeploy them.

ROONEY Williams is, among other things, a funny artist—can you speak to the way his humor functions?

WITKOVSKY Williams absolutely has a terrific sense of humor, summed up in the word slyness. It shows up in his references, such as the choice of the model for Kodak Three Point Reflection Guide… (2005), a series of images of a woman, Meiko, with a Kodak-yellow towel wrapped around her head; Williams cast Meiko by following the instructions that comedic genius Jacques Tati developed for a principal character in his masterpiece, Playtime (1967). It is also plain to see in certain pictures, such as the seemingly incongruous smile on Meiko’s face-Williams has photographed several models (Meiko, Mustafa Kinte, Playboy model Zimra Geurts) smiling broadly or laughing outright. Such expressions seem out of character or even out of control. The “mixup” of our exhibition spaces, the apparently random catalogue excerpts across the walls, the exaggeratedly spare hangings, and the quirky or subversive details in many if not all his photographs, are so many strategies designed to bring an enlightened smile to viewers’ faces.