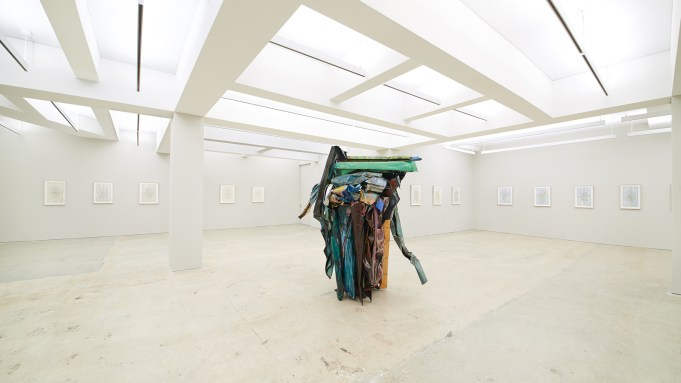 There is something about John Chamberlain’s sculptures that makes them extremely conducive to being paired with paintings. Over the years, several exhibitions (most memorably at the Chinati Foundation in Marfa, Tex., and at New York’s Cheim & Read gallery) have juxtaposed Chamberlain’s painted-metal sculptures with canvases by Joan Mitchell to amazing effect.

A show currently on view at New York gallery Nahmad Contemporary (through July 26) demonstrates that Chamberlain’s painted-metal sculptures can also connect with the medium of drawing, especially when the drawings have been made with Chamberlain’s work in mind. In the exhibition a single classic Chamberlain sculpture titled Gangster of Love (1985) is surrounded by “Crushed,” a series of 32 abstract, mostly linear, black-ink drawings made in 2011 by Amsterdam-born, New York-based artist Jan Frank.

A few weeks after the show opened, Frank spoke with A.i.A. via e-mail about the backstory to the show, “Jan Frank: Gangster of Love/Crushed.”

RAPHAEL RUBINSTEIN What is the connection between you and John Chamberlain? Were you friends?

JAN FRANK I was a big Chamberlain fan and thought of him as one of the greats of his generation. His relationship with de Kooning, who is my hero as a painter, was very interesting. In the late ’70s everyone you met, you met in a bar. I first encountered Chamberlain at [New York club] Max’s Kansas City. I always went to his shows. I have to admit that we never had a serious talk-one of us was always too drunk. Years later I heard that he wanted to meet with me after seeing a show I did at [New York gallery] Danese. This meeting never happened. Around 1999, I was invited by Philip Johnson to do a show in an empty building on Spring Street. It was on the site where he was going to build his Urban Glass House. The space was very large, so I asked Chamberlain to do it with me. He was very excited, but before anything could happen, the building was torn down. After Chamberlain’s 2011 show at Gagosian I wanted to go out to Shelter Island, where he lived, to show him the drawings I had done in response to his work. He died at the end of the year before I could see him. Time really has a way of running away from you.

RUBINSTEIN That’s quite a string of missed opportunities! Any other regrets about Chamberlain?

FRANK Every time I saw him I always would forget to ask him to crush my pack of cigarettes, something he would often do for friends.

RUBINSTEIN Why do you use multiple sheets of paper taped together instead of a single sheet?

FRANK It all started because I would like some aspects of one drawing, and would tear out that section and place it on another drawing. This is actually very similar to the way I make my paintings, where I sometimes reproduce an area I like with silkscreen and use it somewhere else in the painting. The four-square format made it possible to switch images among drawings. It also related to John’s use of parts from different cars in his sculptures.

RUBINSTEIN Many viewers looking at your work wouldn’t guess that drawing from the nude is a crucial part of your practice. Why is it so important to you?

FRANK Where else am I going to draw my lines from? I try not to engage recognizable body parts, which would give it too much focus. The idea of drawing from the model came to me when I was at de Kooning’s memorial at [New York’s] Museum of Modern Art. I’m attracted to the challenge of responding to the female form through abstract, minimalist means. I have always felt the hardest part of starting something is putting down the first line. It dictates the future.

RUBINSTEIN Your drawings are very painterly, and your paintings rely greatly on drawing. Obviously drawing isn’t a supplementary medium for you.

FRANK I think the most important thing I want to convey, really, is that drawing is too often considered as a secondary form. Drawing should be seen as a primary form, potentially the equal to painting. Think about Rembrandt, Matisse, Picasso, etc. In my drawings I put in the same effort as I do in my paintings. I see them as equal. At times I even use the same materials in the drawings and the paintings.

RUBINSTEIN You were born in Holland but came to the U.S. as a child. Your work has often engaged two great Dutch artists of the 20th century, Mondrian and de Kooning (who of course both emigrated to New York). Do you feel Dutch at all? Is there anything cultural that you share with Mondrian and de Kooning that can be traced back to Holland?

FRANK The history of Dutch art! I think it also has something to do with how art is placed in everyday culture in Holland. After we moved to the U.S., my father never took me to a ball game. We always went to a museum. I grew up as a European. My family never really assimilated.