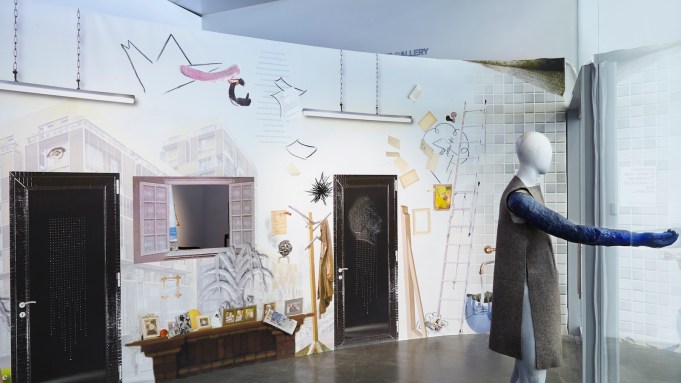 Emblazoned in capital letters on a glass wall in the lobby gallery of New York’s New Museum is a phrase that can be hard to forget: “Ideally This Sign Would Remember You.” This isn’t a question or hypothesis, one realizes, but a self-assured, prescriptive statement. We’d be better off if signs had personalities and memories. It would be “ideal” if the words we read could also, somehow, watch over us in return.

Laure Prouvost’s installations are idealistic in this way. The mnemonic sign is part of the French-born, U.K.-based artist’s “For Forgetting” (through Apr. 13), a solo exhibition that’s really a multi-sensory installation. The walls are covered with dense, trompe l’oeil murals; odd sculptures, including a felt-clad mannequin, dot the space; and video screens seem to pop up everywhere. “For Forgetting” comes off like a Gesamtkunstwerk with a sense of humor.

The focal point is a video playing in a miniature theater that divides the gallery. Characters don homemade masks and perform quasi-occult rituals as part of a loose narrative about money, art, memory and spirituality. The work conveys less an argument or critique than an exercise in associative thinking, as images from the screen are repeated on the walls. Through it all, Prouvost manages to extract something highly sensual from the cool aesthetics of video and digital graphics. Spend enough time with the exhibition and an uncanny suspicion might arise that all these images could (ideally?) be looking back.

The humorous, searching quality to Prouvost’s work belies the art world authority that comes with Britain’s prestigious Turner Prize. She won the award for her video installation Wantee (2013), a meditation on grandfathers that linked a fictional paternal figure and Kurt Schwitters, an artistic forbear. A cavalcade of residencies, exhibitions and press breakfasts followed. Yet on the day this winter when A.i.A. caught up with her, the art world grind had hardly diminished her palpable excitement about her work. She frequently cracked herself up when talking about her videos, Nigerian phishing scams, tourism in Italy and the taste of certain tabletops in the New Museum’s café.

WILLIAM S. SMITH This is your first solo exhibition in the U.S. Could you introduce the show for those, myself included, who haven’t had a chance to see your work until now?

LAURE PROUVOST The show really has two titles: “For Forgetting,” of course, but the main video is called How to Make Money Religiously. That video was a very short piece I made like six years ago. It started from spam e-mail: your long-lost uncle from Nigeria has this house and doesn’t know what to do with it. I started singing the spam while wearing masks or painting my face. Everything was a bit surreal, with ridiculous lines about money-making. Then I came to New York and I saw that it was all business, and I said “Let’s bring together money and religion.”

SMITH So that’s what America’s all about, money and religion?

PROUVOST No, it’s the same everywhere. And the piece is really about how images relate to memory and forgetting. “For Forgetting” is the idea of re-accessing images. It’s about how powerful looking can be as memory. You’re powerful just by looking at this table here; you know the taste of it because as a child you licked it, or something like it. The main video is about feeling fulfilled by getting these images in your head.

SMITH You’ve spoken about images in an expanded way. Like they’re not just to be looked at but also touched, tasted or somehow felt.

PROUVOST It’s a lot about sensation. I love it when a film smells: you can say a film stinks, but they can also smell good. Moving images are such a powerful medium because they can trigger quite a lot of senses. The audience is used to having their eyes and ears triggered, but I’m interested in how you can trigger even more senses, like smell or touch.

SMITH So it’s a visceral, subjective experience that you’re after?

PROUVOST I quite like the idea that everyone takes what they take from the work; in a hundred viewings the work will be different each time. The work is constantly de-centered and changed by the viewer.

SMITH That sounds pretty generous, like you’re ceding some control as an artist.

PROUVOST Sure, but my videos are very bossy as well, telling you what to do: sit down, don’t eat, take care. They’re just images but they manage to boss you around. But I do feel vulnerable as a maker, and the viewer is vulnerable as well; everyone feels some sort of vulnerability, but everyone also gives something in the work.

SMITH I wonder, though, how personal the experience of art making is for you, given that you often perform in your videos, but in the guise of different personas and identities.

PROUVOST I play a lot with the idea of fiction blending with reality in my work. Fictional characters are a way for me to be able to say things without me saying them. Sometimes the art world is elitist, for instance. I get at that by bringing in characters. I play my grandma, who is really annoyed with contemporary art. When that character speaks critically I can say, “It’s just my grandma who said that. I would never have said anything like that!”

SMITH You treat videos almost like objects in your installation, which also encompass collages, architectural elements and sculptures.

PROUVOST For many years I was mostly working with videos, and they’re still my link to everything. But recently, in the last five years, I’ve explored an explosion of what the video is. A lot of it’s about translation and sense-translation of a feeling or translation of a work into a different medium. I think it’s interesting to translate into a collage or a mural, how do you re-experience something, it’s always different, you tell a story, each time it’s different, and that’s fascinating. It becomes quite physical, you’re in the video as well, you’re in the work. It’s a bit like—and this is slightly more open—the idea of a relic. I’m interested in religious relics.

SMITH Is there a mystical logic to your videos, then?

PROUVOST I think video is very spiritual and palpable. I think it’s almost bringing religion to the image. I’m not saying I’m preaching; I don’t want anyone to think that. Questioning preaching, I think, is a good thing because there’s a lot of it everywhere. And why do you we need it? Why do people need so much to be guided?

SMITH So you’re now in the U.S. and you’ve just won the biggest award for British artists. But you’re also French and you deal a lot with German and Italian art as subjects. Do you think about ideas of national patrimony in your work?

PROUVOST It’s quite layered. And now with this piece there’s quite a bit from New York. But I like that you don’t really put yourself in a place. I love living in London, but I’ve never felt I belong totally, and that’s a nice feeling.