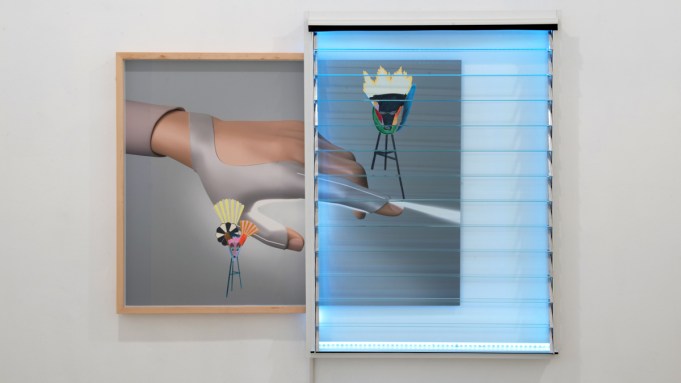 Anna K.E., a Brooklyn-based artist originally from Georgia, uses a variety of mediums to create spatial divisions, often altering the physical experience of her work by guiding her audience to unexpected perspectives. “The artist choreographs the viewing experience, using her works to define a circuit through architectural space,” William S. Smith wrote in the January 2015 issue of A.i.A. “Yet unlike ‘participatory’ art, Anna K.E.’s work places only gentle demands on her audience, and our willingness to navigate around her jagged forms is rewarded by a new, richer view.” Currently on view in New York is Profound Approach Easy Outcome, an installation commissioned for the curved wall of the atrium at the Queens Museum of Art. On view until February 18, 2018, the work uses sculptural reliefs to enhance large-scale photographs of the artist standing in front of oil paintings from the permanent collection of the Metropolitan Museum of Art: Otto Dix’s The Businessman Max Roesberg, Dresden (1922) and Balthus’s Girl at a Window (1957). K.E.’s installation visually merges the two institutions, prompting a scavenger hunt, giving visitors to the Queens Museum the option of traveling to the Met to seek out the paintings that inspired her. Speaking in her Bushwick studio, K.E. was calm but spoke openly, occasionally gesturing with her hands to share her excitement, evoking the energy that she channels in her work.

ANNA K.E.  I was invited to do something on a large, slightly curved wall in the museum. I had the feeling that it functioned almost as a facade, a building inside a building. It can almost feel like an object and has a particular presence. I wanted to make something that was architectural and emotional, reacting directly to the space. I first came to New York as a tourist in 2006 and I took a series of photographs at the Met. I was interested in the public and the performative quality of their poses in front of artworks. I was inspired to stand next to many of the paintings in their collection, including the Dix and the Balthus, and have a friend take my picture with a cellphone. There were many layers, starting with me as a female artist deconstructing the history of the museum through these iconic works. Through the lightness of the tourist snapshot, I wanted to interfere with the images, and ask at what point does the work end up in a sterile environment and lose its vulnerability.

HAMER  Can you talk about how you chose the two photographs in your installation?

K.E.  I chose these two paintings because of the awkward sense of movement they create and how they interact with the curve of Queens Museum’s wall. The architecture suggested the choice. In the photographs I mimicked the gestures of the figures of the paintings, and in the installation I wanted to mimic the shape of the wall. So it became something more sculptural. I also wanted to add a feminist touch and it was important for me to use the Dix painting with a male figure, staring. The painting by Balthus shows a girl leaning against the frame of an open window. The transparency of light represents a sense of hope. In my poses, I tried to repeat the gestures of the figures in the paintings, which represented flight for me at the time and now my own transition from being a tourist in New York to living here.

I had to retake the photographs, and there were a lot of issues with getting permission and access to shoot. My originals were made in 2006, so they needed to be reshot because of the lower scale and the quality of the cellphone camera then.

HAMER  There is something fascinating about how the process of retaking the original photograph adds to the performative aspect of the final image. Can you say more about this?

K.E.  Everything had to be recreated, including the museum’s old metal admissions pin that I’m wearing in the photographs, which doesn’t exist anymore. I wore hair extensions to mimic the length of my hair in 2006. Luckily, I still had the dress. My photographer and I were granted the opportunity to enter the museum after hours and they were able to provide me with one of the pins from the archive. The paintings’ frames had been changed, the lighting had changed to LEDs, and the natural wood molding had been painted white. Now there is a sterility that I actually appreciate because it made the photographs more conceptual.

HAMER  The installation is made with various materials and components. There are the two photographs, flush to the wall, a sculptural relief that extends beyond the curve ever so slightly and a large pill-shaped form that appears to be have been bent on one end. The effect over all makes looking at it feel somewhat disorienting. Can you talk about this and the objects you use?

K.E.  I try to install objects to control the viewer’s movement. There are usually options, but I try to direct a very specific path. The shapes that I chose to make for this installation are extracted directly from details in the Balthus and Dix paintings. One is cloudlike, mimicking a shadow below the girl and the other is my own extension of the craning neck of the figure in the Dix painting; it is somewhat phallic and stands erect. The latter is made of EVA foam tiles mounted on aluminum that look like pixels. I wanted to play with the process of building something while also deconstructing it. I like making unexpected situations through dichotomies of form, material, and scale.

Sometimes the work seems too clear or articulated even to me. It can be scary to see people bending and sitting around it. They’re not only observing and consuming but also participating. It’s important for me to bring the public inside the work, through choreography. I like to make them do something even if that is just moving around an object.

HAMER  What is next for you?

K.E.  For the last two years, I’ve been collaborating with artist Florian Meisenberg. We made two large installations together based on our video works, Late Checkout and Countdown Belladonna for a 2016 show at Signal Gallery in Brooklyn. Last year, I also did a project in Tel Aviv at Sommer Gallery showing new work using CGI to make digital body parts. I used a high-resolution image in Photoshop combined with life drawing. The works were produced by both digital and analog techniques, resulting in prints with drawing on top, layered with glass blinds that I ordered from Miami after seeing them in a window during Art Basel. I have an upcoming solo exhibition at Simone Subal in 2018 and will continue this practice, working with a photographer and sculptor who is helping me take molds of my body with a focus on my joints.

HAMER  Now that you have more recognition and exposure in your career through exhibitions, what was it like for you psychologically to return to your earlier gesture mimicking that of another artist in relation to your contemporary experience?

K.E.  After I looked at the 2016 photographs in comparison to others I took in 2006, I realized that something else had happened, something serious. I felt a continuity of my obsession in the gesture, similar to that of someone like Rothko who searched for a certain window to access light, shadow, scale. When I returned to the Met to repeat the action, I was more reflective and contemplative. I knew exactly what I wanted to extract and it worked.