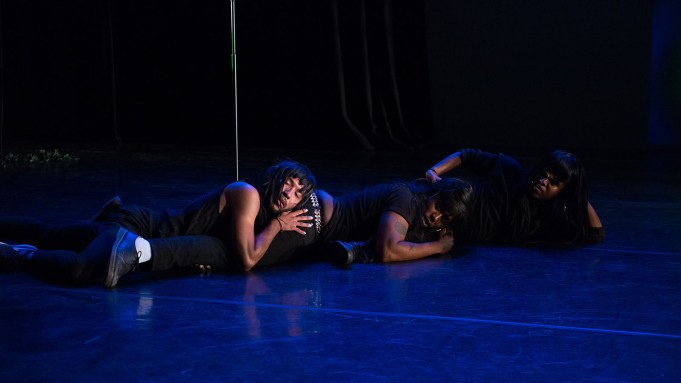 If I were to attempt to isolate a defining principle of Brontez Purnell’s varied practice, I’d wager it’s the gale-force energy he puts into things. As a writer, Purnell’s ink spills between zines, music columns, novels, and screenplays. Not content with just literary prodigiousness, he also counts choreography, filmmaking (experimental, pornographic, and documentary), musical performance and composition as part of a breakneck, punk lifestyle that finds him moving from art, music, and literary scenes in Oakland to San Francisco and beyond. I saw him perform in March, right after a massive blizzard had threatened to shutter the Live Ideas Festival at New York Live Arts. For the Brontez Purnell Dance Company’s New York debut, no curtain or flooring was spared in the gushing spew of baby powder, Jell-O, or popcorn that was Chronic: A Dance About Marijuana. Although audible gasps emerged from the back of the house as the production team quickly came to terms with the long night of clean up that lay ahead, a more estimable fire sparked in the eyes of NYLA founder Bill T. Jones, as I heard him say feverishly to the festival’s organizers, “Oh, he’s got it.”

Johnny Would You Love Me If My Dick Were Bigger was Purnell’s first full-length collection of semi-autobiographical writing. Published by Bay Area micro press Rudos and Rubes in 2015, it carried over both content and tone from his seminal zine, Fag School, whose Xeroxed pages brimmed with sexploits and job meltdowns. In his most recent novel, Since I Laid My Burden Down (Feminist Press, 2017), the protagonist is named DeShawn, not Brontez, though this new character seems not all that dissimilar from his author. What happens when a black queer Oakland punk returns to his religious roots in rural Alabama? How did DeShawn’s childhood relationships with father figures, church ladies, and those furtive fumblings with the church ladies’ sons compose the troubled adult that fills these pages? “DeShawn looked at the Pantheon of men in his life—all the fathers, uncles, fuck buddies, fake boyfriends, whatever—and they all felt like a void. They appeared out of nowhere and disappeared the same way, a puff of smoke. He was learning how not to want.” Purnell has woven a series of anecdotal confessionals about growing up queer in the Deep South into a rich tapestry of intense character study. I spoke to Purnell about DeShawn while he was on a break from his weed-trimming day job in Oakland.

BRADFORD NORDEEN  Can you tell me how the book came about?

BRONTEZ PURNELL  I had just written Johnny Would You Love Me If My Dick Was Bigger and I had an idea for a new book that was fictional and second-person. It started off as a few short stories that revolved around a certain character and grew and grew.

NORDEEN  The tone is totally different from your last book, which comes off kind of like a black queer punk Cookie Mueller. Did you want to write a more mannered book?

PURNELL  I’ve always wanted to write a Southern Gothic novel. In my head, this was supposed to be like Tyler Perry meets Tennessee Williams.

NORDEEN  It’s funny that, though you have enough tales for a bawdy San Francisco tell-all, your first major book project is about childhood.

PURNELL  I thought it was important. When you were growing up, did you watch gay teen movies or read XY Magazine?

PURNELL  I had that ’90s influence, too. But coming-of-age or coming-out stories are always the same! Even Beautiful Thing, one of my favorite movies with a queer theme, is about two beautiful boys who both have perfect bodies and they wake up in bed with no blood or shit on them. You know what I’m saying? Their colons are perfect, right? I didn’t want to be purposefully transgressive but I also wanted to write a story about the fact that a lot of us don’t have this really legible, clean coming out. I wanted to write a coming-out story where the hero is facing intense hardships but still finds a way to validate himself.

PURNELL  DeShawn is not me at all.

NORDEEN  So this isn’t your Alabama tell-all?

PURNELL  No. To be honest, if I ever wrote a full-on autobiography, it would be so earnest and boring. There’s a Huggy Bear/Bikini Kill split record with a quote inside: We endorse the use of lies, but never at the expense of truth. I think that’s an excellent justification for composite characters.

PURNELL  On paper, he’s kind of illegible or he seems like a sketch of a person. But when given the opportunity to explain himself you can about see where he comes from. I think this is closer to the human experience. It shows you that life is inherently messy. How does this boy assess his feelings of self-worth when something bad has happened to him? Some people have a really hard time dealing with a character like that.

NORDEEN  The book has a lot of complicated relationships with father figures, which makes me think not just about blood ties but also about inspiration. I know you’re working on a documentary about dancer Ed Mock right now. The book also alludes to Vaginal Davis at one point. What are your inspirations when you work in so many different mediums?

PURNELL  I’ve been writing zines since I was fourteen. My first was called Spandex Press. I found a copy a couple of years ago at my mom’s house. Even then I was putting in these weird, fucked-up personal stories. So I’ve always thought about my own experiences. I grew up in a pretty rural area in Alabama. When I was around eight or nine years old a woman who went to my church ended up on the Geraldo show because her daughter slept around. The woman wrote a book and had it published, and the cover was a drawing of her crying. I had never known a self-published woman! I forget her name, but I still think about her.

NORDEEN  Do you carve out different pieces of time to focus on different projects?

PURNELL  Yeah, totally. Some people think it all happens rapid-fire, but from start to finish each project takes about two years. So usually after I record an album I take some writing time, and after the writing is done I might start a new dance piece, or sometimes I’ll do everything simultaneously at a slower pace. It’s not that hard for me. I don’t know if this makes sense but I worked at Lush when I was twenty-four—

PURNELL  The bath bomb place! God, it had to have been the worst job I’ve ever had. But I worked with this cute black girl who was twenty-four or twenty-five years old and she had four kids. She was a single mother, and besides working there she was also taking part-time classes at college. And I asked her, “How do you do all of that?” And she was like, “I don’t know, I kind of just do it. If I sit and I think about it for too long I probably can’t do it but if I just wake up and do it then I can do it.” So I always think about her, because if that woman can have four kids that she is raising by herself and go to college, then I can certainly write a record and a book.