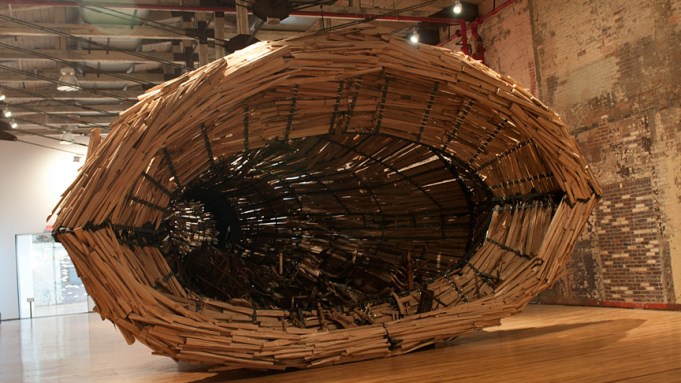 What do Jamaica and North Adams have in common? More than you might guess—if you consider the work of Nari Ward, the Jamaican-born New York artist who has just completed an installation at MASS MoCA, located in the ex-industrial Massachusetts town. In his exhibition, Ward forges an unlikely link between the two places, using personally resonant materials and drawing unlikely formal connections.

The title of Ward’s show, “Sub Mirage Lignum,” refers to the wood of the lignum vitae tree native to Jamaica, which is used to make cheap tourist items. But the name of the tree also translates as “wood of life.” Ward uses the term in reference to his creative process, in which the recycling of available materials becomes the basis of something new. Add to this the “mirage” of history and representation, and the prefix “sub”—that which is beneath the surface—and the title encapsulates the themes underlying Ward’s recent efforts.

On view through February 2012, the exhibition consists of all new work, some of it quite large-scale. Two videos, Jaunt (alternating between scanning views from a Jamaican fishing boat and of the artist spraying a hose in a North Adams carwash) and Sweater (a close-up of Ward’s skin beaded with sweat) make explicit the linkage between Jamaica and Massachusetts in the person of the artist, as both creator and laborer. A child’s minnow trap is blown up to giant scale in Nu Colossus. To build the piece, Ward used wood left over in abundance from a 2010 MASS MoCA  installation by Anselm Kiefer. Embedded in its splintery interior are broken furniture parts, and its wide-open, menacing maw seems ready to suck in an entire fishing boat that has been installed on glass plates opposite. (The boat was found abandoned in North Adams.)

The gallery presenting Stall—four open, empty wooden structures (more recycled Kiefer)—is filled with the din of hammering and the voices of beckoning Jamaican vendors, combining the sound of the works’ construction with voices recorded by the artist on trips to the island. Just visible through the slats in the back walls of each of the stalls are photos and diagrams, and on their exterior walls are posted reproductions of textile samples made at Arnold Print Works, which until 1942 manufactured cloth-printing equipment in the factory buildings now occupied by the museum.

I caught up with Ward the night of the opening, Apr. 2, and began by asking him about the final installation, Mango Tourists, a roomful of 10-foot-high sculptures resembling snowmen but made of braided, gold-colored industrial foam. The figures are bejeweled with mango pits and the tiny, colorful capacitors that were manufactured by Sprague Electric Company, which after Arnold Print Works operated in the buildings’ cavernous spaces (1942–85).

FAYE HIRSCH: You’ve been in North Adams for four months.

HIRSCH: You got a really crappy winter.

WARD: Crappy winter in general—even in New York. Every day it was snowing-it was ridiculous. You know it was bad when even the people here were saying it was really bad. They said, “This is one of those old winters.”

HIRSCH: I suppose it’s just a coincidence that the Mango Tourists are in snowman form. You’ve made snowmen before.

WARD: It’s just a playful shape, not unlike a stick figure—a quick way to reference the body. I’ve worked before with snowmen shapes [for example, Black Top Man, 2006, which was made from tar, among other materials]. I’m intrigued with forms that are so approachable that anybody feels they could make them. The sculptures are really simple-three round balls stacked on top of each other.

Also: the label they always give me is “the artist from Jamaica.” I’ve been living in New York most of my life, but when I go to Europe they’re always calling me “the Jamaican artist who lives in New York.” I’m like, “Wait a second. I’m a New Yorker!” I like the idea of messing with expectations: “Snowmen! He’s from the Caribbean, isn’t he?”

HIRSCH: Some of the tiny resistors and capacitors that you’ve embedded in the snowmen sculptures look like beads.

WARD: When Denise [Markonish, the curator] gave me the tour of the MASS MoCA buildings, I saw all these boxes of leftovers from the Sprague factory, and felt they looked magical amid all the rubble. So I said, “I want all of those.” Literally, I took every single box; we had to go back and pick through the floorboards to get enough for the piece. The idea was to inundate the very mundane, almost flat-line foam material. And weaving is something I do in a lot of my work. But [the capacitors] were about bringing an energy and intensity to it.

We had to figure out how to do that weaving. One of my favorite of the Mango Tourists I call “the ugly one.” We got progressively better, but it was a real task—it was hard to work with the foam. I had previously used foam in my work, exactly because it was this mundane, ahistorical material. This is what motivates me to work with discards. People never want to think about them. I like those things that get pushed around and never really seen.

HIRSCH: One feels that the work is crafted—but it’s not fine crafting.

WARD: Oh no—it’s funky. And of course, mangoes are one of the first elements that I wanted to work with. Here was a material that I felt was about potentiality—the mango seed. But also it was about the word-about making activist words: “man, go!” I always love a play on words. The seeds, with their potential, worked along with the battery canisters. It’s about storing and releasing energy, and all this weaving is about energy.

HIRSCH: And the weaving is about labor, too, one of the central themes in the videos.

WARD: The videos, actually, were the starting point for the work. They concern my desire to find a place that was not only about Jamaica, but about creative search.

HIRSCH: What is the square glass-bottom box that’s being held in the video Jaunt?

WARD: Oh-the fishermen use it to see if there are any fish caught in their pots, and then they pull the pot up. I was staying at Porches Inn [in North Adams], and every time I would walk over here I’d pass the carwash. And I saw the square [of the car-washing stall] and I thought, “I’d like to do something with that carwash.” It was right there, just 30 seconds from Mass MOCA.  People were cleaning their cars a lot this winter. So I became a performer, spraying the water with the sunlight. I thought, “That’s what painting is like.”

HIRSCH: The other video, Sweater, which shows you sweating, is also about work.

WARD: Yeah—it’s the labor. It was the easiest piece here to make; it took maybe about ten minutes. A good buddy of mine, David Hammons, I remember him saying to me once-and he supports my work, but especially if you’re a young artist, he likes to mess with you-he said, “Nari, man, they love to see you sweat. They love to see you do all that hard work.” He meant it as a way to nudge me. “Oh yes—they want you sweating in the fields.” So I thought, okay, let me give them a piece showing myself sweating. I wanted to respond to his commentary. He’s a Duchampian.

HIRSCH: So Hammons is not sweating.

HIRSCH: You arrived at Mass MOCA, I understand, with the idea of the minnow trap.

WARD: I came with a small minnow trap, only about this big [holds his hands out to indicate about eight inches]. But it inspired me to devise a passageway for the viewer to think about history. The chairs in there are a metaphor for history. They’re things you look at, you recognize, but you bring your own experience to them. They’re broken, but at the same time every time you see a part, there’s a reaction to knowing what it is. That’s how we survive as human beings. For artists, it’s about having to untangle that a bit. As people look in there and recognize a chair, a table, it’s a way of them creating something. That broken furniture doesn’t exist any more, but in your head you make a connection to something very basic. It’s a survival mechanism—going back to recognizing things that could eat us, things we should run away from. I wanted a real primal connection for how we look at things. It’s the form of a fish, and the form of an eye; it’s a room. It’s all of those things.

HIRSCH: The installation includes a local New England fishing boat, and the fishing line, glass and wood are from previous installations by other artists here at MASS MoCA. But when you arrived, did you know what you were going to build the piece out of?

WARD: I found it really funny that the wood from Kiefer’s show was going to take this form.

HIRSCH: So, in recycling a previous, dismantled installation, you have made a work that is both about destruction and creation.

HIRSCH: And the boat was just a big surprise.

WARD: One of the guys who works here heard about the fishing village I was looking at in Jamaica, and he said, “Oh, do you want a boat?” I resisted it at first, because I thought, “They’re going to think it’s all about Jamaica.” But when I went to look at it, I thought, “Oh this is a real boat.” It reminded me of Gilligan’s Island or something. At one point I was using some glass left over from [Spanish architect] Iñigo Manglano-Ovalle’s installation [in 2010]—there was a lot of it, so I wanted to work with that. I was trying to reference those glass-bottom boats for tourists in the Caribbean. Instead, I used the glass to support the boat. And the fishing line was from a piece that was also in this space at one time, as well. It all sort of came together.

WARD: The more I can use to build an architecture for the viewer, the more a sense of control I think I have. I feel a little anxious, so I overcompensate a bit.

HIRSCH: And the huts?

WARD: That’s also taken from the Kiefer wood. They’re based on Jamaican vendor stalls. I like the word “stall”—it’s something like stable, an artist’s stable—but it’s also a word that implies impotence, like you’re stalled out. And they’re empty. I always loved that piece by Robert Morris, Box with the Sound of Its Own Making [1961]. So it’s a little bit of that, and a Jamaican marketplace. We recorded them as they were being built, so the sound you hear is the sound of all that coming together.

HIRSCH: And the images that you glimpse through slats in the back of each?

WARD: I wanted there to be a little secret whisper. If viewers choose to look closely, they’ll always see something more.

HIRSCH: I also wondered about the fact that North Adams used to be a vital industrial town but isn’t any more—you get that empty space, the ghost of that productivity.

WARD: The textiles are all about that—the images mounted on the side. Of course it’s a fiction—they’re not really the textiles, but laser prints of them. There’s a lot of fiction in this show.