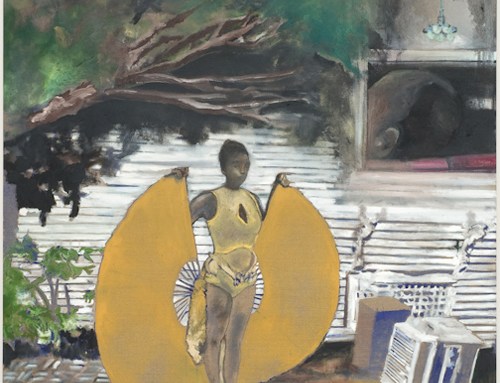 Seattle-born, Los Angeles-based artist Noah Davis—known for his large-scale figurative canvases marked by drips, stains and watery veiled layers of paint—delivers a balmy brand of expressionism that these days calls to mind Luc Tuymans and Marlene Dumas. A graduate of Cooper Union, Davis has been included in such acclaimed group exhibitions as “30 Americans” at the Rubell Family Collection in Miami, and “Fore” at the Studio Museum in Harlem.

A.i.A. sat down with Davis in what he calls the Underground Museum, his experimental art space/studio/residence in L.A.’s Crenshaw district, on the eve of “The Missing Link,” his solo exhibition at Roberts & Tilton [through Mar. 30].

YAEL LIPSCHUTZ I think of you as a painter’s painter. Whenever we see each other you talk about formal issues above all else, the color palette you are using, the images you are looking at. How do you build up your canvases and what are you working on now?

NOAH DAVIS We do always talk about color palette. Sometimes I wish there was this deeper meaning but it really does come down to color. In my show at Jack Tilton two years ago the colors were very dark, and then there were works at James Harris in Seattle that were a bit more vibrant. The show coming up is a nice compromise between those two shows.

LIPSCHUTZ What is this painting? [Points to Temptations, 2013.]

DAVIS This canvas refers to a Temptations stage set from their hit single Just My Imagination (1971). It reminded me of a Sol Lewitt sculpture garden that I saw in Battery Park. The Mies van der Rohe building in the painting next to it [The Missing Link 4, 2013] refers to Lafayette Park in Detroit, which became an interesting example of urban renewal before its time, maybe the advent of housing projects, but like you said earlier there is also Le Corbusier. I guess you could say I am fascinated with instances where black esthetics and modernist esthetics collide.

LIPSCHUTZ This interest in a black esthetic has also been used as a device to frame your own practice, and by this I mean exhibitions such as “30 Americans” that employ race as a glue to bind practices that are quite disparate. What do you make of these frames?

DAVIS Being in “30 Americans” was pivotal and until “Fore” I hadn’t been in that many exhibitions that revolve around race. I think the former was a window into what had come before me, and the latter was what’s about to happen next. I am honored to be in both shows. I can’t speak for all black artists but I feel like we compete in the regular art world grind that includes shows, art fairs and not all those things fit under the race umbrella. So when I’m able to come back to these “black art” exhibitions, there is a sort of jovial feeling, as opposed to a limiting one.

LIPSCHUTZ Your inclination to move back in time and space seems somehow quite central to your project. Whether it is midcentury Detroit, or ancient Egypt. One of the earliest series of paintings I saw of yours was the “Osiris” group [2009], a set of surreal portraits that used Egyptian mythology as a lens through which to filter the contemporary black experience. You transformed Isis, for example, into a young African-American woman who stands, wings spread, beside a busted air conditioner in front of a row house. These geo-temporal shifts allow for subtle, often highly literary social commentary.

DAVIS Yeah, in 2010 I did a series called “The Forgotten Works” that took a somewhat obscure Richard Brautigan novella called In Watermelon Sugar [1968] as a launching pad for my own black countercultural dystopia. I am also really drawn to film, and partly imagined those Brautigan canvases as storyboards for a Roger Corman-style movie. In my new body of work there is a painting directly inspired by a still from Hitchcock’s The Trouble With Harry [1955] that made me think of Manet.

LIPSCHUTZ The slippages in time seem to have as much to do with accessing art history as social history. The way you handle paint makes me think of Munch, who, though considered an expressionist, painted very thinly and populated his canvases with the sort of everyman figures that you utilize in your work. There is a dreamlike quality to your canvases.

DAVIS I am constantly looking back at everyone. Surrealists like de Chirico. I love Kitaj, and Redon for his colors, his symbolism. Leon Golub. Sculptors like Noah Purifoy. I have been experimenting more in three dimensions.

LIPSCHUTZ Earlier this year you installed a series of sculptures in the studio that you called “Imitation of Wealth?” They were replicas of well-known works by artists such as Jeff Koons, Fred Sandback and Donald Judd.

DAVIS We view this place as an experimental space that is open to the community. It used to be an old pupuseria and a church, and it had been vacant for about four years. I bought a vintage Hoover vacuum cleaner off Craigslist for $70 that was the exact design of the Jeff Koons. At that time there had been a string of shows in New York and Los Angeles that took the premise to destroy big high-end galleries and create crack dens or whatever. I was inspired by artists such as Samuel Mockbee and Theaster Gates and institutions like Western Bridge in Seattle. I like the idea of bringing a high-end gallery into a place that has no cultural outlets within walking distance.