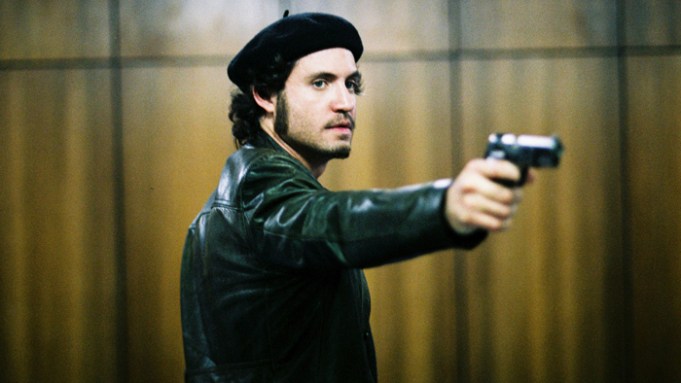 A generation after Godard and Truffaut penned their first film criticisms for Cahiers du Cinema, filmmaker Olivier Assayas cut his teeth there as a writer. He has subsequently directed 13 feature films.  The script of his most recent, Carlos, is as recondite as a typical article for Cahiers, trafficking in global politics and terrorism at the end of the Cold War.

Carlos follows Ilich “Carlos” Ramírez Sánchez (played by Edgar Ramirez), an infamous terrorist active during the 1970s and 80s in Europe, the Middle East and North Africa. Although the film proposes to be a fictionalized account of the life of Carlos, Assayas took pains to investigate how he staged his deathly, agitprop Marxist protests against those nations unsympathetic to Palestine. Carlos was filmed in nine countries that stand in for 17 involved in the drama.  The film premiered at Cannes this past May, running five-and-a-half hours, and was shown at the New York Film Festival this past weekend. It will be released in the United States in its original full-length format, as a television mini-series, and as an edited two-and-a-half hour theatrical cut.

We sat down with Assayas in between a sandwich and a public appearance at the New York Film Festival to talk about Carlos.

JORDAN HRUSKA: How were you first introduced to Carlos?  Did he figure largely in your past in France?

OLIVIER ASSAYAS: I was aware of him from the headlines. I was a student when he shot the cops in the Latin Quarter [in Paris]. It was very near to where I was studying, so it was more like all of a sudden there was a blast from a far away war hitting very near to my familiar world. In this sense, it was close to me, but beyond that, I had no idea what he was about. No one really knew at the time. All you knew was that this Latin

American guy, Carlos, had dropped three French cops. And I had glimpses of what happened in Austria with his kidnapping of the OPEC conference leaders, but it was not like it was big news in France for me.

HRUSKA: This was a poignant scene that took place in the Latin Quarter, where Carlos is at the party of Marxist student rebels and he is forced to do something desperate. It seemed to me that it was where Carlos lost the romantic aspect of what he was fighting for.  How did you conceive of this scene?

ASSAYAS: This is a defining moment in the history of Carlos, so I knew I had to describe it. When you research that kind of event, you end up using various sources—biographies, police transcripts—and you try to make sense of  the contradictions. It was very much about trying to understand the logic of the event and capturing it as precisely as possible. And originally, I knew nothing about it. It’s not like when you write a screenplay and somehow you figure out the dramatics of a scene. Here, it was  the opposite. I knew I had to tell the story, except I had no idea what the story was about. It’s a turning point in the sense that up until that point, Carlos is a Palestinian militant… and that’s it.  After he kills the cops in this scene, he’s public enemy number one. His photos are in the newspapers and he won’t be able to set foot in the Western world for the rest of his life. LEFT: ASSAYAS. COURTESY FILM EN STOCK

HRUSKA: This paranoid space really defines the film.  It reminds me a lot of Orson Welles’ multinational mystery man films, Mr. Arkadin and F For Fake. How does the film at all refer to the antiquation of the nation state in a more open world?

ASSAYAS: It’s certainly about revolutionary internationalism, on one side, and on the other side it’s very much about geopolitics.  It speaks to how terrorism during this time isn’t defined by local politics.  Most of the movies that have been made about terrorism deal in local politics; for example, how the Baader-Meinhof story fits in with the narrative of modern German history, but ultimately, it’s not really about the history of Germany—it’s about the Cold War.  Carlos is about how the Cold War was happening on a global stage… not the Eastern Bloc or Western Bloc in Europe, but also the Middle East and, you could also say, Latin America. So, this history was defined by multinational issues. Carlos himself absolutely embodies it: he was Latin American, educated in Russia, became a militant in Jordan for the sake of Palestine, moved to London, then he established a network connecting London, Paris and Germany, and became active in the Eastern Bloc in the second part of his life.  You cannot tell his story like that of the Baader-Meinhof group. In a certain way, he’s one rung above them.

HRUSKA: Yes, I see his field of activity much more macro in his scope. But, as a result, I get the impression that he truly doesn’t understand his own intentions. It’s interesting to hear how he presents himself, because his cause and organization are always changing names.

ASSAYAS: Oh yes, the signature organization is always this, some kind of vague kind of name under which he acts.

HRUSKA: I’m curious about Carlos as a character.  He seems to be fueled a lot by issues of compulsion, and I see these similar traits in some of your protagonists from films like Demonlover, Boarding Gate, Clean and even Summer Hours.

ASSAYAS: The way he maybe connects to my other characters is that he’s someone who is trying to survive in an ever-changing world. It’s always about transforming yourself and adapting to new situations. It’s a mixture of how his ideals—well, ideal is a big world for Carlos, so let’s stick to ideas, adapt to a world that is becoming slightly different than what used to be the framework of those initial ideas.  So, he has to constantly re-invent himself and be constantly on the move: physically and intellectually.  What is interesting about Carlos, is that he has no choice—he’s on the run. He’s dependent on the little space that he has—a space that is constantly shrinking.

HRUSKA:  How will this film resonate with those who were not alive during the publicized acts of Carlos in the media?

ASSAYAS: It’s something that I’m beginning to understand—the thought that he’s a great fictional character.  His story really tells something about the relationship between politics and the media.

HRUSKA: And even theater.

ASSAYAS: Yes, of course. Carlos is an actor. I suppose that someone who is not familiar with the history of Carlos will be able to get more quickly to the core of what he’s about as opposed to the bigger picture of history, fate, how you are made by history and crushed by history.