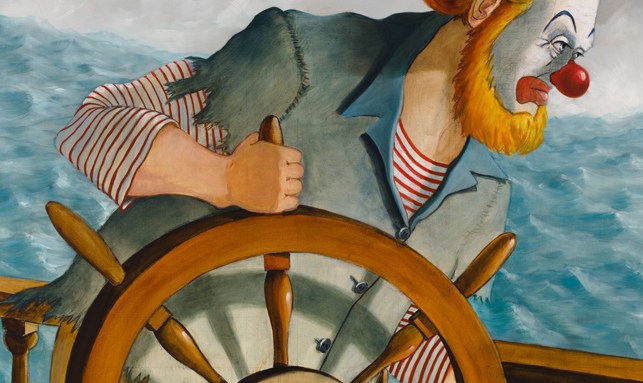 For the last two decades, Sean Landers hasn’t exactly slummed it as the leading proponent of “slacker art,” the practitioners of which use confession and metaphors for misery to both self-lacerate and critique the easy pathos of popular entertainment.

Take, for instance, the immense weblike text paintings for which Landers is best known. In them, frenetic admissions seem to knowingly thwart the truth of confession and expressionism. For “Around the World Alone,” currently at Friedrich Petzel Gallery in New York, Landers removes himself from the picture-almost. He’s been replaced by that supreme symbol for both humor and melancholy, the clown, alone at sea and in various poses. In previous works, a more macho Landers has been represented as a chimp.

Landers told A.i.A. that the clown series began with a single painting he made in 1996, Alone, which featured a solitary clown adrift in a rowboat, with a painted frown not quite disguising his alarm at the rough seas. Alone recast Landers’s wit and intermittent despair in quiet desperation. “It is,” he said, “the exact point in my work where the stream-of-consciousness text was handed off to pure image painting.”

CATHERINE KRON: Your work has a consistent sense of pathos. I was curious if it was sympathy you try to elicit from the viewer? If not, how about empathy, antipathy . . . ?

SEAN LANDERS: Sympathy, definitely not; empathy, absolutely yes. I don’t ever want to be in the position of eliciting pity, but empathy is what I trade in. And empathy is, for lack of a better word, the main viaduct that art has traveled between viewer and artist throughout time.

KRON: The new paintings seem like an entirely different project from the romanticized loser or slacker of ’90s “slacker art,” which is how your work was labeled initially.

LANDERS: I’ve been fighting the slacker moniker for my whole career. I work really hard!

The clown in these works is going through some heavy seas, but he is in control. This clown character showed up in my very early work as a symbol for more self-doubting moments in my writing. The jump from text to symbols like this clown was made at a point when I was looking at old work and reading some of the text on my paintings.

My moods are very cyclical: I go from self-aggrandizing to self-effacing-“I’m great”; “I’m terrible”; “I’m great”; “I’m terrible”-over and over. I assigned the clown character the self-effacing thoughts and the chimp [which doesn’t appear in this series] the self-aggrandizing. In some of my paintings that internal conflict looks like cartoons. The chimp is always beating up the clown in a very typical “Saturday morning cartoon” way.

KRON: The clown in Alone isn’t getting beat up by the chimp, but you feel as if he’s getting battered by the waves.

LANDERS: Yes, sort of. I made Alone in 1996. It’s the source painting for the entire show up at Petzel right now, and an iconic painting for me in the history of my own art. It is the exact point in my work where the stream-of-consciousness text was handed off to pure image painting. The clown is funny and sad-which is my taste in a lot of things, I guess. If some people want to look at the clowns and just laugh and think that it’s pathetic and “Oh, what a fool who would write or paint that,” that’s okay with me, but I think it’s much more meaningful than that too.

KRON: You seem also to be one painter who has a lot in common with the stand-up comedian.

LANDERS: True, I always felt like Mike Birbiglia, in particular, was doing my shtick. In 2004 I actually painted a series of stand-up comedians, because whenever I was writing extemporaneously on a large canvas, I felt to some extent like I was doing stand-up, telling jokes so people wouldn’t leave the painting. Those early text paintings where as needy as they were funny and always written slightly in character, but I felt they were daringly honest also, like a comedian.

KRON: So there’s the continuing narrative arc of the clown in the work as a recurring character in different moments, and as a figure in relation to the chimp. But the clown also operates in these paintings as a symbol, an immediately recognizable “clown” for the viewer to “read,” to, say, “Oh, it’s a clown sailor.” And then maybe to go further into it and think about how this clown operates in the context of a sailor at sea and in the context of your work as a whole, which deals with the act of performing and the fear of failure. The clown acts as a scrim in that first, immediate sense.

LANDERS: It’s also literally a painted mask. If you think, “Who is this guy in this boat?,” and then, “That must be paint on his face because he has flesh on other parts of his body. So maybe he has to paint that on daily?” That’s him getting into character to do his thing, like I do to make the work.

KRON: And to deal with the chimps, who sort of undermine the clown while he’s doing his thing, which is essentially slogging through the ocean.