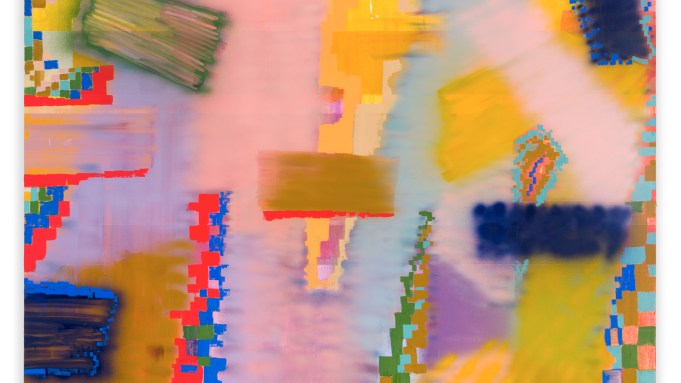 Brooklyn-based painter Keltie Ferris creates marks—smeared, sprayed and hand-painted—that solidify or dissolve into abstractions with a sense of perceptual depth that allows for multi-dimensional readings. The 38-year-old artist returns to Chelsea gallery Mitchell-Innes & Nash for her second solo exhibition (Sept. 10-Oct. 17) with several new works created during her recent trip to Los Angeles. This show marks the first occasion where both her paintings and body prints—her recent method of working with natural oils and pigments, using her whole body as a brush—will be shown together. Ferris recently spoke with A.i.A. about identity, constellations and what keeps her interest in abstraction alive.

JASON STOPA The title of your Butch-Femme Boogie Woogie (2010) references a well-known Mondrian painting [Broadway Boogie Woogie, 1942-43]. It appears that you were looking at earlier abstraction through a digital lens.

KELTIE FERRIS It wasn’t intentional. My earlier works had clear separate layers of paint. I used spray paint to bedazzle a canvas; I never thought of the paintings as digital. I was thinking of textiles and Seurat. People saw a cityscape in the work, and that made sense. So I made work more directly descended from Broadway Boogie Woogie-probably the greatest abstract painting ever inspired by a city. Since then, the culture has shifted. Now people use the digital as a metaphor to read my work. I’m not against it, as long as that is all it is. It’s not what I’m thinking about when making a painting.

STOPA This is the first time you’ve shown the body prints and the paintings together. You use hand gestures or a spray gun to make discrete marks, then the body is another mark.

STOPA There’s a very intimate relationship to the surface. I thought about other painters who have used the body as a tool—like Gutai artists or Yves Klein—but they’re really after something else. Gutai linked performance and action painting together to create works where the artist becomes an actor. Klein was interested in placing the spectacle of painting on display with the added shock value of naked female bodies. Your body prints strike me as a marker of identity or personhood, especially in a world in which both are in flux—they aren’t as solid as we used to think.

FERRIS That’s exactly how I think about them. It’s almost like my personhood as a discrete mark. What’s the difference between my body and my personhood? And can that be the basis of a painting? How different is that from the rest of my work, my paintings? Somehow these works call that into question, I hope.

STOPA It definitely comes through. In a recent conversation about painting, someone asked me, “Isn’t the gesture or the mark somehow always already compromised?” You can’t do it without some self-awareness, it seems, because it comes with so much historical baggage.

FERRIS I think that baggage is good. Baggage gives us a lot to work with. There are so many associations that you can manipulate to your advantage.

STOPA Right. You can turn history on its head. Your new work seems very much in your own territory. There’s a multi-dimensional quality in the paintings, a hyper-depth or hyper-space. It evades the easy polarities or flat or illusionistic, which we associate with abstract or representational painting. It’s not the sensual depth of Color Field paintings, but there is an implied horizon. You’re using a radically different sense of space that speaks to fragmented spatial relationships. Can you talk about the space in these?

FERRIS Yes, especially with the new work, especially the larger horizontal works. I have some large paintings that are nodding to landscape or an abstracted bodily form in a landscape. I was thinking a lot about Matisse’s Dance (1910), Le Bonheur de vivre (1905-06) and Bathers with a Turtle (1907-08).

STOPA That last one sounds kinky.

FERRIS It does! [Laughs]. It’s three depressed women—one looks like she’s flossing her teeth, one is seated bent over, and the other is squatting to feed a turtle in a mural-like, green-and-blue landscape. I don’t know what the hell is going on in that painting. It looks like they’re in paradise and they’re bored. They’re all naked, but all so unsexy. I’m interested in that kind of space, which seems to be some kind of utopia, maybe a utopia gone wrong.

With all my recent work there’s a space but then there’s something in front of you keeping you from accessing it, maybe a set of marks hanging in the air. I’m told that people can’t tell what’s coming forward and what’s going backward. There’s a constant tension and therefore movement. It’s meant to be a dynamic place where things can happen, as opposed to sitting still. The space slowly evolved by following the weirder moments in past paintings, and this is what I’ve come to—where I am now. My paintings used to be dense and layered, and lately I’m separating out the parts.

STOPA Emptying them out.

FERRIS Some are about a mark as “pixelation,” and some are about the shapes I can make. How diffuse can the spray paint get and still read as a form?

STOPA Some of the paintings ride a tension where a form is about to appear. You’re about to get the parameters of the thing, a grip on it, and at the moment where one tries to do that, something else starts to happen, something recedes or dissolves.

FERRIS You as the viewer have to put it all together. There seems to be an image, but you have to do the work, and you’re not really sure if you’ve found it.

STOPA  It puts the viewer in a place of questioning. “What am I looking at? What am I supposed to receive from this?” So many of our visual experiences have built-in expectations. When I walk down the block I expect the sun to cast shadows, people to pass by me and so forth. I don’t have to ask why the light is casting that particular shadow, I just grasp it and move on. We take it for granted, that ease of receivership. To break apart pattern recognition in a painting is one of the most exciting things to do, perhaps because it’s one of the hardest things to do.

FERRIS And the flip side is just to make a mess. I almost named the show “Constellations.” I’m naming a lot of paintings after constellations. The stars are always up there. They make a particular pattern. They don’t make that picture from every vantage point. Over the years we’ve been seeing particular pictures, shapes that we pick out and effectively create. You can look up and try to make pictures of your own. That process of little points of light becoming pictures seemed like an apt metaphor for the paintings.

I want to use painting’s full arsenal. You can indulge in incredible color in painting, so why wouldn’t you? Illusionistic qualities—I never understood why that wasn’t part of the Greenbergian arsenal. It’s one of the great things a painting can do. My work tries to include these things—the objectness, a sense of scale, a sense of the hand—all of those things are exciting to me, and I want to keep them all alive.

I’m excited to have the body prints and the paintings together in this show. A conversation will take place between them. My imagination is not filled with pictures, it’s not photographic. It’s way more schematic than that. Things are connected by spatial memory. I think of my paintings as a sort of imaginative reality that someone has spent a lot of time in. It’s not just codes and numbers, it’s sexy and embarrassing, and it’s also emotional. My paintings tend toward the euphoric and positive. I guess that’s just my personality. It’s how I am, and how they are.