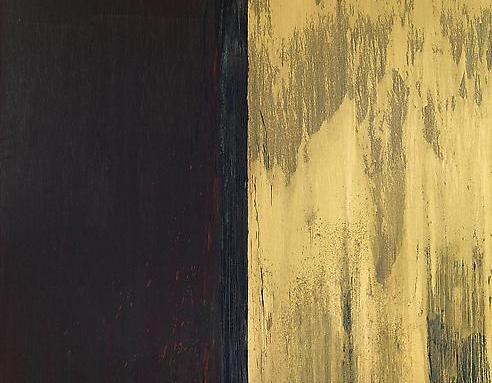 Entering Cheim & Read Gallery in New York right now is like stepping into a canyon of color and light. Pat Steir is showing her splendid new paintings—giant abstractions, more than ten feet to a side, which have been years in the making. Mainly diptychs comprising abutting panels, the paintings in her “Winter Group” are subtitled with the three or four colors she uses to make them—often a surprise, because the multiple layers of paint, applied through chance procedures such as splashing and dripping, seem to be composed of many more hues than she lists. Staring at these grand paintings, it’s unclear if you are looking at something extraordinarily bright or profoundly dark, hot as fire or cool as ice. Like a fitful late winter day, they seem constantly to shift in light and temperature.

The New York- and Amsterdam-based Steir has had a busy year. Her 40-year drawing retrospective, “Pat Steir: Drawing Out of Line,” was on view from February through November 2010, first at the Rhode Island School of Design and then the Neuberger Museum. This winter at Sue Scott Gallery on the Lower East Side, she created a installation called The Endless Line. On walls brushed a textured blue-black, she painted a thick white line around the interior perimeter, illuminating the rooms with a black light that made them glow eerily. She executed another long line, this time of red, yellow and orange, on a wall washed transparent blue-purple, for a temporary barrier on the Whitney Museum’s lower level, and called it Another Nearly Endless Line. The Sue Scott installation closed; the Whitney’s is up as long as the museum’s new restaurant is under construction.

I met Pat just before her Feb. 17 opening at Cheim & Read.

FAYE HIRSCH: You’ve been working on these paintings for three years, from 2009 to 2011. Yet you’ve called them the “Winter Group”: that’s rather curious

HIRSCH: What does that mean?

STEIR: It means trying to go into the secret places. The dark places.

HIRSCH: Yet the colors are so warm.

STEIR: The dark places aren’t always dark. Kay Larson wrote a beautiful essay in the catalogue. I think of [the paintings] as going into the mysterious places, that can be very light, that can open into something light. Or that can start as something heavy and dark, and metamorphose into light. I was trying to see what’s more of a barrier, the light or the dark.

HIRSCH: Barrier to what?

STEIR: To passing through. You’d be a good psychoanalyst! You’re an editor, that’s why you ask those questions.

HIRSCH: I am genuinely curious.

STEIR: I was thinking about the haloes around angels’ faces. And around the Christ head. I was thinking of the lines from Rilke’s “Duino Elegies”: “Every angel is terrifying.” And “beauty is nothing but the beginning of the terror.” And, you know, the Jewish God, you can’t even say the name. You can’t even know the name. If something is very light, what’s behind it or between it is dark, you can’t see it: the light is blinding. The light makes the dark. And I was thinking about the light in terms of masking something. Masking the face, or masking the sacred. But you know—it’s three years of work. I have many, even conflicting, thoughts about them.

HIRSCH: I’m sure, as time goes by, just as there are so many layers in the paintings, you must also change in your feelings and ideas about the work.

STEIR: In another way, they’re simply color paintings. The colors are made for the eye: one layer of basic color on top of another. Instead of mixing them on the palette I mix them visually. The transparency makes another color.

HIRSCH: So is that your set of chances, your methodology: that you begin with certain colors and those are the ones you stick with?

STEIR: For a given piece, yes. And I don’t change; I don’t go back. I’m from the conceptual art generation, so I have my little systems, my rules. Even if it looks like it’s not working, I go forward and finish the painting. And then if I don’t like it, I put it away. Sometimes I take it out later and I say, “Oh, I should have shown that painting, it was the best!” Often the unfamiliar doesn’t look good at first.

HIRSCH: It’s like a cathedral in there, with those giant paintings. Or something like Barnett Newman’s “Stations of the Cross”—the way they are positioned around the room, and the way you have to move through them.

STEIR: Well—that wasn’t unconscious. I’m a big Barnett Newman fan. Let’s say that getting away from Barnett Newman has been the biggest job for me. I didn’t mean to make them “stations,” but I meant to make each one specific.

HIRSCH: They’re very different from one another.

STEIR: Yes, so as you go from one to another, it could seem like the stations, because this is this and that is that.

HIRSCH: The use of the dual panels really gives them a constructed feel.

STEIR: I was moving toward that in the last exhibition I had here. And then I did a lot of other paintings that have been exhibited in Paris and Philadelphia that are smaller than these but are divided in a similar way.

HIRSCH: So what does that do, as opposed to the long expanses of the waterfalls?

STEIR: For me it is as important as the dark and the light. Where the two panels touch, where they meet, is important. Sometimes it reveals everything underneath, and sometimes it’s just like a door closing. I was having a conversation with my friend Mei-mei Berssenbrugge, the great poet. We were having lunch. She said she’s been thinking in her work about the difference between the sacred and the spiritual. I just ran away with that idea. I ran home and wrote her a letter about it.

HIRSCH: So which way have you run in these paintings? Toward the sacred or the spiritual?

STEIR: I’m on a hunt for the sacred. I’m trying to discover the difference myself, but I can’t talk about it with so many people.

HIRSCH: In this installation you have all those grand winter paintings, and then one, singular red painting, like the heart that’s beating within. Is that how you thought about it?

STEIR: That one’s called Valentine. That painting is the doorway to the next work I’ll do.

HIRSCH: It seems very intimate. You round the corner and there it is. The others don’t feel private in quite the same way. I thought that was an interesting pivot. It really gives you a sense of just how grand the others are.

STEIR: Valentine is something else. It’s a battlefield. The splash coming in from the side—that’s real random—more random than a pour. A pour has gravity. These are like antigravity splashes—they were hard to do!

HIRSCH: It looks like all of them are hard to do. I was looking in the front room at the lengths of the drips and how straight they are.

STEIR: It’s the weight of the paint.

HIRSCH: You do so many things with that weight. Is it all indirect, or do you brush as well?

STEIR: One or two of them have brushing in them, and you can see it with your eye. But  the brushing is pouring paint off the brush. Mostly I pour the paint from the top, either from a bucket or from a brush. But every once in a while I start from the bottom and that’s where you see the brush. I pull the brush across, loaded, loaded, with paint. It will leave a residue.

STEIR: When I began painting I thought, there’s more to go. Maybe not far, but more. There must be more—it can’t be the end of painting for the sake of painting. In my idea, abstraction starts with figuration. And this work is non-figurative. I wouldn’t even call it abstraction—just non-figurative. The waterfall paintings started with an image. And these didn’t really. They started with an idea—a feeling about an idea. They have no image.

HIRSCH: Are these the most abstract paintings you’ve ever made?

STEIR: In a way. Their image is an idea, not a phenomenon. As John Cage plainly said, it’s the space inside.

HIRSCH: Do you see the paintings and the wall installations in relation to each other?

STEIR: I see them as two bodies of work. I’ve done a lot of the installations in Europe, and here from time to time. I did one at the Whitney before, about 12 years ago. Then Adam Weinberg called me-they had an extra wall, and asked me to do something on that wall. The next day I was there working.

HIRSCH: The element of chance-it’s very different in the two bodies of work, right?

STEIR Let’s say the time is shorter on the installations. It’s like a trapeze act, or a tightrope walk. In the end, the line is the tightrope. You could fall, and that’s the thrill of it, you know? That it could fail colossally. The process makes it very hard to go back. It’s more than hard-it’s not possible.