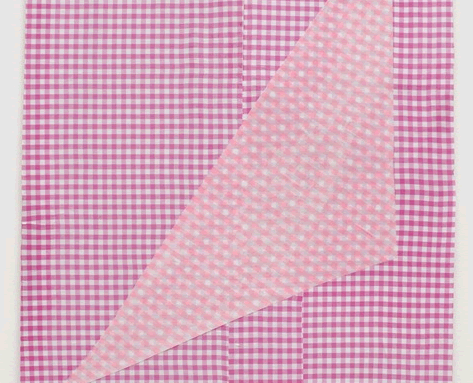 Cheryl Donegan’s video Head (1993) has likely been shown by every feminist art professor to their students at least once. It was also recently included in Katy Siegel’s landmark 2015 Rose Art Museum exhibition “Pretty Raw: After and Around Helen Frankenthaler,” which placed Donegan’s and Frankenthaler’s work within the context of male-dominated postwar abstraction. In Donegan’s fifth-floor New Museum exhibition “Scenes + Commercials” (on view through Apr. 10), curators Johanna Burton and Sara O’Keeffe consider the artist’s video work and so much more. The show serves as the debut of Donegan’s DIY fashion line called EXTRA LAYER, created with Print All Over Me, a virtual design platform. The project featured in a concept store within the exhibition and in a fashion show later this spring. In addition, Donegan is showing her iconic videos alongside lesser-known paintings and drawings that shed light on a multidisciplinary practice. Donegan spoke with A.i.A. about everything from Matisse to Chantal Akerman to the joys of the start/stop button.

CHERYL DONEGAN  A central component of the New Museum project will be this fashion show. A new aspect of the work is using print-on-demand technologies. As a result of technological changes there are all kinds of ways that you can use web-based, consumer-friendly means. I don’t have to depend on being financed from the outside or having lots of people help me. I discovered digital fabric printing, which is often used by home sewers, but what happens if you come to it thinking, “How can I jam this?” I’ll give it a file that is too big so that it can’t repeat continuously, or I give it a file that is asymmetrical or invert the settings in a funny way. I don’t have to rely on art world printers who charge me an arm and a leg. I can just adapt these consumer models.

SIMMONS That reminds me that in your early videos you would just turn the camera on and off because you did not know how to edit the footage.

DONEGAN  Right. I thought, let’s make this a performance video where it unfolds by itself. The only edit needs to be start and stop. I had no idea how to patch it together, but I had an idea and I just pressed play. It was the most satisfying thing, because I was trying to make sculptures at the time, and I found that the process of manipulating materials in sculpture evoked a degree of permanence. I was trying to use food, but you definitely cannot make permanent sculptures out of food! I was using bread, and things were disintegrating or rotting, and rats would come in and eat it! Being able to control the time of video made more sense to me.

SIMMONS  This connects to your paintings and your interest in pattern. A crux of modernism was the fear of things becoming decorative. You are pointing to these questions of reproducibility, of controlling how many iterations of an image there can be.

DONEGAN  This is why I am such a Francophile, because for me, this all has to do with the French—Duchamp and Matisse. Those are two artists people think are diametrically opposed. Who could be more different than Duchamp and Matisse? Duchamp thought very carefully about how things are made and reproduced. Take Fountain—it is a mass produced object that is also made out of porcelain, which is actually an example of Arts Décoratifs. Duchamp was thinking about the dichotomy of craft and industry. Matisse grew up in an industrial town surrounded by weavers and textiles. He was exposed to dyeing and preparing textiles, as well as weaving technologies that were advanced for the time. How the decorative arts have influenced Matisse is something that should be acknowledged. I think the French have a profound insight into these questions of reproduction and decoration and the nature of a motif.

SIMMONS  This seems important as you move into fashion, since it sounds like there is something very queer about your approach to these subjects. One definition of queerness is what normative society would call a waste of labor—there is nothing reproductive occurring. Especially in late 19th-century France, the aristocratic class became very concerned with outward markers of virility and manliness because of the breakdown of easily defined inheritance-based lineages. Your investment in labor sounds like a feminist or queer operation because of its non-normative models of production.

DONEGAN  I have considered that, but one has to be respectful and mindful when discussing such things. I’m cisgender and heterosexual and a breeder! How can I claim queerness?

SIMMONS  That is why what you are doing is so important, exactly because you are not doing any claiming. In your fashion, video and painting work, you love working with elements, such as digital printing, that are out of your hands.

DONEGAN  Absolutely. I found the idea of feminist labor profoundly influential when Chantal Akerman discussed her film Jeanne Dielman, 23 quai du Commerce, 1080 Bruxelles (1975) and women’s work. She framed it in the context of 1970s American art being concerned with industrial labor, like Carl Andre or Donald Judd and their simple acts of Fordism. Akerman asked what happens when we apply this notion to domestic labor. Like Minimalist art, Akerman’s film depicts simple, repetitive movements, but no one considers them worthy of elevation to the status of an art investigation. Suddenly Jeanne Dielman is scrubbing the tub in real time for 20 minutes, and then she moves on to making a veal cutlet—akin to how I was making those early videos. Just start and stop. She had the courage to point out: I get what you’re saying about simple, repetitive forms of labor, but what about what my mother does? Let me make an avant-garde film about that.

SIMMONS  Something that comes to mind when discussing this unflinching reproduction of reality is Toni Morrison’s new novel God Help the Child. Kara Walker, in her review for the New York Times, said that the prose is terse and lacking beauty and that it reminded her of reality TV. Morrison, who is known for her lyricism, writes a novel for the first time about contemporary events, and her style completely changes—it is choppy and pessimistic with its own kind of start-and-stop effect.

DONEGAN  This is intriguing to me because I have been going back and reading about history, and actually, I have been thinking a lot about Kara Walker and the way she uses cuts within a narrative. Contrary to popular thought, she is illustrating how things actually happened with no exaggeration at all. White people think her work must be an obscene pantomime of a negative, horrendous fairy tale, but it actually seems more like documentary film!

Ever since I read Rem Koolhaas’s essay “Junkspace,” I have been thinking about how our vision for the built environment is mediated by what the media and corporate worlds look like. It returns to what you were discussing—this pausing and restarting within a continuum. There is a constant, abrupt cutting—a membrane of cuts. That is why I have been very interested in metaphors of skin, of fabric as skin. Cutting and patching fabric become a part of this. When you look at Google Maps, you see a flexible, digital skin over everything.

SIMMONS  Your videos almost mimic the moment when you see the Google Maps car driving around taking pictures. There is an interruption of the digital skin to which you refer.

DONEGAN  There is an awareness of it, and then you try to create eruptions with it. In this vein, something simple like a gingham pattern became a way to talk about these things. It seems like a complete, intact surface, but it could, in fact, be quite shattered while insisting on its togetherness. It is a disconcerting feeling of experiencing an intact surface that asserts itself as not intact. You feel vertigo at negotiating both. It is maybe not an unpleasant feeling, but there is definitely anxiety.

SIMMONS  It could be said that we live in a culture of pastiche, of patterns and collages. I am thinking of Lady Gaga, Lana Del Rey, David Lynch, True Detective, Girls, Lars von Trier. There is a constant desire for self-reference as ways to legitimize one’s self, but then sometimes ethical questions get lost in hyper-intellectualism.

There is, however, still the traditional idea of the isolated, genius artist who comes with no attachments and whose sui generis comes only from the self. That is its own self-referentiality. Non-attachment is a driving myth that produces artists who feel that their only allegiance is to their own creative imagination, which excludes other contributors. This produces an anxiety of influence. What if we insisted on the intimately connected, in being completely embedded? You have to take yourself a little bit less seriously.

How do you not get stuck in the selfie, when the themes and motifs in the work get so ground down they just become about self? When I was doing the first seven to nine years of video, I was really aware of Rosalind Krauss’s critiques of video and narcissism. Additionally, there were critiques from second-wave feminists—”You’re performing for the male gaze; you’re showing your body.” They would say, “What are you going to be doing when you’re 55? Rocking a G-string? How feminist is that?” One part of me said, “Fuck you!” and another part was filled with Catholic guilt.

Some people think that if you’re a single-channel video artist who uses her body, you’ll be making that kind of work forever. It was an effective critique because it made me pause and feel badly about myself, but even as a young artist, I never agreed that you have to own a style forever. That’s why I titled two early single-channel pieces Practisse and Craft (both 1994). It’s all a rehearsal. That is also why I was so fascinated by the Beach Boys, which inspired the video Scenes + Commercials (1997), a rare instance where I’m not in the video myself. Brian Wilson could never finish an album because he could think of 100 different ways to arrange a song. It’s amazing but troubling. Putting him the context of “hits” actually ruined him. The version of “Help Me Rhonda” that we know is as good as 15 others. Why would we allow only one version to come through? That’s what I was trying to do. I did not want to become an icon.

SIMMONS  It is an art historical conservatism and a social conservatism because it implies that you can’t talk about body politics in different ways. It suggests that there is only one way a body can operate in art—physical representation. You, however, have pointed to the body’s presence or absence in painting and video alike, with or without a literal corporeality.

DONEGAN  This goes back to the “queering” of things. What you just said is the generative essence of queerness. It’s not about the normative act of reproducing—of reproducing an icon or an individual thing. It is a series of attitudes or positions or ideas that are never-ending. If that’s what the queer spirit is, then I want to participate in it. What is truly productive and generative is play.