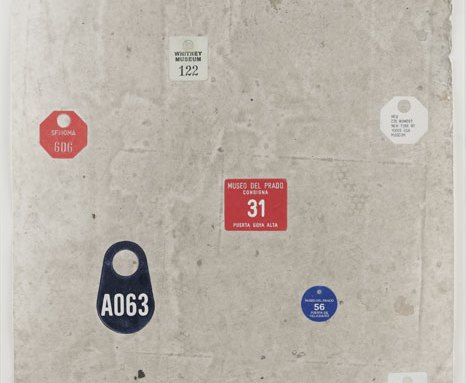 Paul Sietsema’s solo exhibition of sculpture, films and drawings at MoMA last year was organized by the museum’s department of drawings. Indeed, the artist’s dexterity as a draftsman—evident in a current show of exquisitely complex drawings and paintings at Matthew Marks—is remarkable. But while Sietsema can make trompe l’oeil images to rival the “perfect” naturalism of photographs, his intention is to excavate sites of image production.

Perfection in each mark reveals not simply a craftsman’s talent, but the contemporary terms of artistic creation and image reproduction. What does it mean for a human hand to painstakingly reproduce an image that could be more economically rendered by a color printer?

In a 16mm film work from early in this decade, Empire (2002), the artist compared American critic Clement Greenberg’s apartment to an 18th-century rococo dwelling, constructing miniature models of each environment and filming a tour through each—à la Robin Leach’s “Lifestyles of the Rich and Famous.” The piece shows the roots of Sietsema’s interrogative odes to art-making and art culture, and his methodical devotion to minute detail. His newer work—including photo-perfect ink drawings of the front and back of a photograph of a boat (Boat Drawing, 2010) and enamel paintings on paper of various museum coat check plaques (Collection 3, 2010)—is equally inquisitive but far less straightforwardly diagrammatical.  A.i.A. speaks to Sietsema about the escalating intricacies of his current work.

AIMEE WALLESTON: The content of your ink drawing, Painter’s Mussel 4 (2011), is a framed photograph pried apart—suggesting an aggressive rejection of photography. By producing, by hand, images so technically perfect as to confound the viewer into believing a human made them, are you are trying to beat printers and photographic techniques at their own game?

PAUL SIETSEMA: I see hand- and machine-made things as existing in a continuum; one is not better or inherently more interesting than the other. Who made the machines, anyway? I guess much of my work is developing the right machine, the right process, in order to make the work. And if I confuse what a hand or what a machine should be doing, or thinking, maybe something will come out of that.

I guess my feeling about hand versus machine is ambivalence-which is probably how the machine feels about it, too.

WALLESTON: In Boat Drawing (2010), you copy the front and back of a photograph of a boat, replicating in ink the aging and crumpling of photographic paper. It’s almost as though these effects were equal to, or perhaps more important than, the actual content of the image—the boat, people, waves and so forth.

SIETSEMA: Boat Drawing was built up in layers, with equal attention paid to every small piece of real estate, so the equalizing of the paper the boat is on with the boat itself is pretty inevitable. I was interested in layering or couching various aspects of different mediums. I use watery acrylic inks, and I like the parallel of the brush in ink and the boat in water. I like the match-up of the flat white topographical field of the sails, the portrayed photograph and the paper the drawing is on. So it’s a boat captured in the ocean, captured in a photograph, the photograph captured in photographic paper, and the photographic paper captured in the paper of the drawing. The overall combine of esthetics ends up consisting of the residual physical aspects of each.

Eight or ten years ago I remember watching one of the Star Wars movies that had just come out, and noticing that Lucas had decided that in order for computer generated images to look right, he needed to add back the errant, random, unseemly aspects of materials. Robots needed dust and rust and dents to look right. These formal qualities were a natural byproduct of [traditional] photography, but this aspect of [traditional] photography and objects had to be reproduced in a newer [digital] medium.

With the boat I like the way the antiquated layers intersect with the antiquated image of sea travel. On the boat, one of the figures is waving-maybe as a farewell to photography?

WALLESTON: The two Untitled ink drawings (2011) are both completely abstraction-one is a dark abyss that gives the illusion of refracting light, the other a light square edged with blotches. What are you trying to say about working with ink?

SIETSEMA: I wanted to make images of ink. Maybe one way to think of them is as homage. The larger one would be an homage to the brush, the smaller and lighter one to the hand. I suppose it’s a way for the materiality of the ink to take center stage, along with its delivery device.

When I was making these I also liked to think of them as portals: the larger and darker one as an actual portal, a kind of dark cave, the smaller and lighter one as an image of a portal (the shape made positive with finger and hand prints). I originally put the darker one next to the doorway into the gallery, but that seemed a little too literal or maybe redundant.  Where it is now, across from the entry, I like to think of walking straight ahead (bypassing the show) and into the drawing, into whatever is across its threshold—which in this case wouldn’t necessarily just be Metro Pictures, the gallery next door.

WALLESTON: You’ve made two enamel drawings based on the plaques you received from museum coat checks around the world, Collection 2 (2009) and Collection 3 (2010). They recall passports plastered with travel stamps-a traveler’s memento. Was that the point?

SIETSEMA: When I was in New York in 2002 in preparation for my show at the Whitney I had a large parka with me. I wasn’t so familiar with the weather in New York, and fearing an un-Californian climate I wore the parka for a meeting with my curator at the museum. I checked the coat and got a nice little plastic plaque with a number on it in return. It had become far too warm for the parka by the time I was leaving the museum so I decided I’d leave the jacket at the Whitney and come back for it later. I ended up uptown past the Whitney’s closing time and had a plane to catch back to LA early the next morning. There was no point trying to get the coat back and I didn’t really feel like the little plaque was such a bad trade.

I realized that as a matter of fact I felt pretty good that something of mine, even if it was just a coat, was now in the collection of the Whitney, even if that meant, in this case, that it was just in the building. I began to leave personal belongings in coat checks at other museums and began to assemble my collection of plaques.  My drawings of them are my way of showing different parts of this collection.