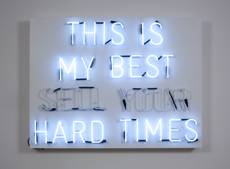 Hank Willis Thomas’s show Pitch Blackness remains on view at Jack Shainman Gallery through March 14th. The Aperture Foundation published his first monograph of the same title in October 2008, and his work was included in 30 Americans, an exhibition this past December at the Rubell Family Collection, in Miami. Hank and his former studio assistant, Patrushka Bazan, had a recent conversation about the making of his new body of work.

PB: I guess we should begin with the most obvious question – What is your show, Pitch Blackness, about?

HWT: I think Pitch Blackness is a show that’s trying to contend with issues of race, identity, and history in the age of Obama. The title of the show, which I took from the book Aperture published of my work, plays on the idea of pitching or throwing away blackness, the permanency of the color black, and the proposal of blackness as a race.

PB: In the B®anded  series, you make and manipulate images so they resemble commercial advertisements. In Unbranded, you erase text from advertisements from the late 1960s to the present as a means of focusing your viewer’s eye on the charged imagery advertisers use to sell their products. Appropriated and manipulated images lie at the core of both bodies of work. I feel like you’ve made a very clear shift in this show from the use of appropriated images to manipulated text. Did you make those choices intentionally, as a parallel to the current shift of power in our country’s government?

HWT: One of the most challenging things [about this show] was that most of the thought and research happened before the election and there was a lot deliberation in the studio. How do I make work that’s relevant, and that talks about race and culture? With the prospect of having a black president it seemed like it was easier to make same of the old work or present some of the same ideas [if McCain had won]. But with Obama, I had to at least make work that was a little more open-ended and perhaps try to inspire some degree of hope, openness or lightness. That was very hard for me to try to visualize and photograph in a way that would have a lasting impression.

There had already been so much iconography [produced in response to] Obama. With that in mind, and having read a lot of books and looking at old photographs, I decided to make a piece that used text from a book published in the turn of the last century called The Progress of the Race. For the piece, the text was engraved on the surface of three granite headstones. The first phrase says, “Some fair questions.” The second one, “The slate is clean;” and the last, “Everything must go.” Those three phrases stood out for me. I was trying to ask fair questions of the moment; if the slate is “clean” as so many people were trying to suggest and celebrate after the election, then everything must go – all of our ideas about race, identity, history, and the past must be rethought and restructured. I don’t happen to believe the slate is “clean,” in that context. These headstones are a way of trying to lay history to rest.

PB: I am curious about your choice of materials for a lot of the pieces. Your background is in photography, yet the show diverges from that, both materially and in terms of content. Can you talk a bit about your decision making process regarding the use of new materials?

HWT: Due to my choice of materials, this is the first show where I relied on other people [for production]. I wanted to create work almost as thought I were an art director, and I wanted to think about the show and the concept behind it as though it were an ad campaign. I worked with various sign companies and graphic designers to actually make work that in some ways had this look or feeling of the advertising industry. I often say that I try to use the language of advertising to talk about things advertising couldn’t talk about responsibly. Since this show didn’t primarily feature advertising as the subject or as a tool, though the work functions [as advertising].

PB: I see this approach in the neon pieces, the suite of 20 canvases that reference the “I am a Man” posters from 1968, and the headstones, but what about the piece, The Day I Realized I Was Colored?

HWT: That image was from a 1961 issue of Negro Digest, which was a literary weekly magazine for African Americans. I had been tooling around with that picture for the past couple of years trying to figure out the perfect phrase or idea to express this image that said so much. I actually went back and found this magazine again; the text below it said, “The Day I Discovered I Was Colored,” which really spoke to so many issues that I was trying to bring up in the show. With this idea of pitching blackness, letting go of these ideas, we should go back to the origin and the fact that we do, at some point, find out that we are Black, or White, or Asian, or Latino, or female, or male. That picture, [in the magazine] with this black boy being told that he is different by these two white kids, and having to try to understand – it really made the moment clear for most black people when we learn that we are ‘colored.’ Recently, I remembered the day I discovered I was ‘colored,’ officially.

PB: When was that?

HWT: Another artist friend of mine, Bayeté Ross-Smith and I were walking down the street twenty-five years ago; we were coming from an after school program. I asked a question about why we were called ‘black’ if our skin was brown and Bayeté tried to tell me that my skin may be brown, but I’m black. I said, “No, I’m brown.” He said, “Yeah, but they call us ‘black’ to simplify it. It’s more direct.” In so many words, he was saying that it’s easier to group people into one [definition of] color, as opposed to identifying them under the many hues within their race. He helped me realize that though my skin may be brown, my identity is black and in that moment, it became clear to me that I was black.

PB: Friends always keep us even — thank God for them! I’d like to talk a bit more about other pieces in the show. How about Time Can Be a Villain or a Friend.

HWT:  Barack Obama and Michael Jackson are two figures that helped me in thinking about the show because Michael Jackson is the first person to actually “pitch blackness” in that he literally got rid of it. He thought the concept of blackness was not useful to him, or to his identity. That image, Time Can Be a Villain or a Friend, refers to the title of an article printed in a 1984 issue of Ebony magazine. [The feature] imagined how Michael Jackson would look in the year 2000; it said that by age 50 his fans would have grown tenfold and that he would have matured in all of these different ways. How much further off could they have been to see him as this brown skinned, more refined gentlemen compared to who he is today?  What’s interesting about Obama was that originally he wasn’t “black enough.” Then, because of his relationship with Michelle and Jeremiah Wright he quickly became “too black.” By the end of the campaign, he managed to reposition himself in a way that people were talking about him as “post-black.” The way in which his “blackness” changed over the course of 18 months is pretty fascinating.

PB: Which piece from the show is most significant to you?

HWT: The neon sign that says, This is My Best. Sell Your Hard Times, as it’s one of the first pieces that I’ve produced publicly that really doesn’t respond directly to race. It is a weird step for me to talk about things and make work that has a broader interest, which I think is also important for artists of color to do.

From the top: Hank Willis Thomas, The Slate is Clean; Everything Must Go; Some Fair Questions (2009), all edition of 3, laser engraved granite; The Day I Discovered I Was Colored (2009), injet print; Time Can Be a Villian or a Friend (1984-2009), LightJet print;This Is My Best Sell Your Hard Times (2009), edition of 3, neon sign. All images courtesy Jack Shainman Gallery.

Akris, Its Roots in Fine Fabrics, Marks a Century

These Are The Best Cases To Protect Your iPhone 14 From Unexpected Drops, Scratches, And More