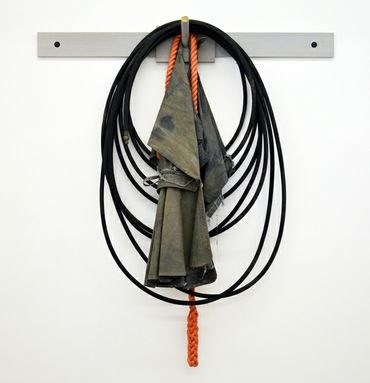 The title of Rachel Foullon’s latest exhibition, “Ruminant Recombinant” [through May 26 at ltd los angeles], refers to the four-compartment stomachs of cows, goats and sheep. By chewing, swallowing, processing, regurgitating, re-swallowing and reprocessing, these animals digest their food in a way similar to that in which the artist deals with her materials. For this show, “Clusters,” Foullon has constructed hanging assemblages (all works 2012) of found objects, sewn and dyed garments and ropes, and past works that evoke frontier esthetics.

Decidedly more elegant than the description above would suggest, Foullon’s sculptures hang on a movable cleat system of pegs mounted on two levels of Western red cedar planks. The works are spread over two walls in increasing density toward the back of the gallery. Each work seems to be negotiating or conspiring with its neighbors as if its life depended on it. On the opposing wall hang four mirrored sculptures made of polished nickel and refurbished farm tools that perform the role of fetishized antiques. Each reveals distorted views of the space.

A.i.A spoke to Foullon this weekend about the show and the concept underpinning its relationship to the agrarian life.

PAUL SOTO Could you tell me about the physical materials you are working with in these “clusters,” which is what you call the hanging sculptures?

RACHEL FOULLON The materials come from three different places. The first are older works of mine that have returned in this exhibition, albeit in different configurations. These works now have a convertible quality. They can exist within a cluster-a storage version-or toggle back to their original manifestations. Another material category includes components that I have sewn and dyed in my studio over the past year. Many of these are garments are based on historical patterns, while others have been extracted and approximated from listings in Sears catalogues from the ’20s and ’30s. They are treated with fiber-reactive cold process dyes, using a technique that yields an inconsistent, at times marbleized effect. Lastly, I have incorporated found items culled from an old barn in upstate New York-garden hoses, gloves, electrical cords and so forth-derelict things left over from the previous owner, also an artist.

SOTO The found objects reference a culture that the economy continues to make obsolete. How do you relate the agrarian lifestyle to your work and life as an artist?

FOULLON Sometime last year, I found a kinship between this type of defunct material and my own work-much of which at the time was also “out of use,” and in storage, which is the life of sculpture when it is not on view. Around the same time, I was working on a different, room-scale installation, and, towards that end, producing a large amount of sewn and dyed garments and rural accoutrement. I decided to put the brakes on that project and re-route that accumulation, along with on-hand gallery inventory towards creating a snapshot, or cross-section-a presentation of where I am as a maker right now, where I have been and where I am going. I began to think of my work in terms of economics, in the way that someone takes inventory. At the time, I had all of this work in progress in my studio, I had existing work in storage and I had access to this junk in the barn. I couldn’t help but think, “What are my current assets? What if I treat them as raw material? What if I used those guts to make a show?”

FOULLON There are a couple of specific periods in American history that haunt me, particularly instances of pioneering farmsteads-when adventurous, hardworking people sought to carve out new and original lives for themselves, often in inhospitable environments. The earliest were the Dutch settlers on this continent, who brought with them a lifestyle evident within their architecture–single-room spaces where people and animals lived together. On a good day, there is a relationship there between labor and economy that is not inherently oppressive, but instead rewards material transformation and productive work patterns. Of course, this also touches on a fantasy of isolation and control that I think many artists in their studios can relate to—a particular brand of independent living that incorporates moments of both struggle and freedom. I look at these historical models not in any sentimental way, but rather through a lens of abstraction. I do this by overlaying my own studio practice onto this rich territory, and I use it as a visual language for relaying my ideas about the body and its permeability in relation to sculpture.

SOTO Your palette, which is in very vivid turquoise, yellow and burgundy primarily, seems to counter any nostalgic readings of the work by updating what on first glance looks to be neutral, aged color. Could you tell me about the esthetic effect you’re trying to obtain from the dye process?

FOULLON The body comes through via the dyeing of the materials. I see this staining as a suggestive representation of corporeal negotiations with the environment. These residues could be mud, blood or sweat-fluids that get emptied out of or onto the body as land and animals are physically forced to cooperate. Then again, they are hyperbolic colors, like fuchsia! Rather than relying on a nostalgic approach to this phenomenon-which I think is a knee-jerk dead end-I create folds, loops and returns using the sewn forms as a gentle metaphor for the timeless and complicated pragmatics of labor, both then and now. This is made further visible in the garments’ constructions. In order to dramatize the distinction between inside and outside, I intentionally don’t hem the seams, so that they fray in the dye bath.

SOTO That unfinished esthetic is also apparent in the way that individual components in each cluster interact with one another. Some of the works look like they are exploding out of themselves-there are knots that appear as though they are about to come undone, and fabric elements and gloves that have been stuffed, or packed, into the work, but the cluster seems to be rejecting those forms. It’s an anxious affect they assume, under which these sculptures seem to be conspiring to undo themselves.

FOULLON Yes, there is a lot of binding and tying involved! Again, I am talking about relationships that tether individual beings to one another where survival is at stake. So cooperation of some kind is obviously a requirement in these mutually dependent dynamics. The clusters simulate that tenuous reliance. In some, you can feel that the bond is desired by all parties, and in others, entrapment is palpable. I think this is the anxiety you are identifying. It’s hard to not anthropomorphize these forms, as there is a lot of life in these materials and they really are asking to be combined with each other, whether it’s good for them or not. Even when there’s tension, they jell. In the end, these sculptures are hung up. Traditionally that would indicate that these objects are out of use, or retired. But really, the idea is to enliven those moments of retirement by loading them up with this dynamic where they are teetering on the brink of unraveling.

SOTO Did you construct these all on site? Or had you worked on specific compositions of clusters in your studio before you arrived?

FOULLON Although I had “practiced” making several clusters in my studio, I did not want to arrive at the gallery with the intention to simply recreate them. I laid out everything I brought on a ping-pong table, alongside the existing works I planned to poach. I asked myself: Can I renovate my own work? Can I find alternate versions of some of my pieces that are as compelling as the original? Can a sculpture lead a double life? I started fresh, without pieces already sketched out in my mind. I didn’t want to belabor the decisions I was making. I just wanted to execute, or perform each cluster in a pressurized way. It was very much an emotional impulse.

SOTO What about the pieces in your “Cruel Radiance” series, the tool pieces that appear manufactured in the way of Finish Fetish, which are basically the complete opposite of the other works?

FOULLON The “Cruel Radiance” pieces are, for me, much more intimate. If you think of the installation of clusters as accessing something collective, along the lines of an epic cultural history, I think of these “renovations” as an intimate retelling of the history of an individual, or a biography. I collected preindustrial vintage tools and stripped them of their romantic patina, effectively liberating them from their nostalgic aura and the lazy seduction of the found object. In terms of scale, I made a conscious decision to select tools that fit between someone’s hands, and mirrored the user’s body (lungs for example), or tools that might serve as a necessary prosthetic. In the refurbishment process, they are imbued with an entirely new set of values.

By tracing how the tool once worked in tandem with the body, I extract a geometry that echoes the contours of that movement by drawing shapes that are then custom fabricated in nickel-plated brass. The mirror polish disallows the experience of looking at these works as beautiful, discrete art objects. Ultimately they can only reflect the viewer and the rest of the show. I see them as sirens: seductive, but also kicking you in the face a little. Within the exhibition, they do a very specific job, and that is to close down the aperture—narrowing the experience for the viewer. Making things one-on-one. But then they push you away. I think of those pieces as naked. I intentionally used a palette of sunburned flesh-tone colors.

FOULLON If the nickel plating is at one end of the spectrum of production present in this show, the rusted chain is at the other, and there is a whole in-between of making and labor. Every material has gone through some or many processes of rendering: whether dyed and manipulated, pickled and soaked, scrubbed, sanded or stained. Even the hardware gets blackened. Everybody goes to work.