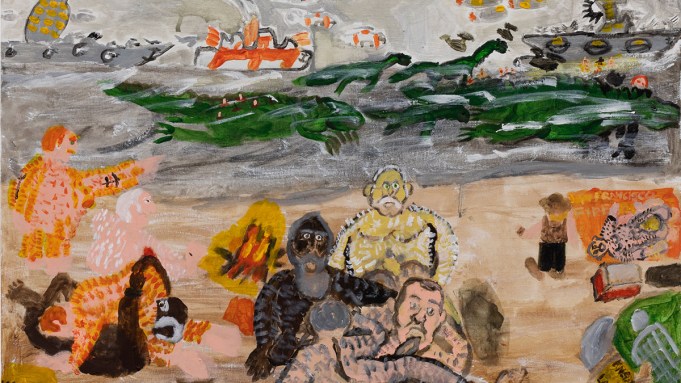 The Bronx-born, self-taught painter and sculptor Raynes Birkbeck—now in his early sixties—melds personal experience with issues of ecology, politics, war, religion, and queer representation. His current body of work, called “The Dinoland Series,” depicts a science-fiction paradise where dinosaurs live among humans and various expressions of love and sex such as polyamory, pansexuality, and gender fluidity are embraced. Set in Los Angeles, the artist’s fantasia is a colorful landscape in which love and shared experiences unite humanity, freed from its current divisions of race, gender, and sexual orientation.

Birkbeck has created roughly one hundred different timelines in which he reimagines historical people and events. These timelines—he refers to the current one as 3.2—are filled with multiple iterations of the characters at various ages, altered versions of those characters, and numerous plotlines. Bringing together disparate personages and periods, his tableaux allow for reflection on the past as well as new possibilities in the future. Birkbeck’s oil paintings, drawings, and ceramic sculpture are currently on view in the solo exhibition “The World View Show” at Nino Mier in Los Angeles through June 30.

What inspired you to create this science-fiction utopia and what do you hope viewers will take away from it?

I was looking at the world from the point of an alternate reality. I imagined the West Coast, with some scenes on the water, as if dinosaurs had never gone extinct but instead stayed with us through modernity and into the future. As I painted this universe, I began to question basic preconceptions, like what if pet dinosaurs resembled our relationships with domestic animals like cats and dogs? I created this world as a mix of what we have now with things from the past that might add even more diversity.

As a self-taught artist, are there any particular influences that were important to the development of your work?

History is integral to my work. I paint scenes of World War I, World War II, the Korean war, and the Vietnam war, as well as projected future wars. My paintings present a world that is similar to ours, but with a better resolution to the problems we face. I also depict a variety of characters, including key historical figures, who ultimately represent larger ideological concepts. Former FBI director J. Edgar Hoover symbolizes law and order, Admiral Chester Nimitz represents security, and General Patton is a stand-in for World War II. They are all older men who I’ve made the same age at the same time. I paint them interacting with regular people—sailors, marines, and civilians—who all hang out on the beach together. I show daily life and what these figures do in alternate timelines—not only as we are used to seeing or hearing about them through historical records.

Why did you place these historical figures in familiar contexts?

Humanization is important in painting because when you are dealing with any event, people can latch on to a hero or a loved one or an historical figure. I hope people think about these figures—familiar or not—in a new context. If I’m painting Moses, for example, I might depict a black leader who could embody Moses in our time.

There are a lot of self-portraits in the show. Why did you choose to paint yourself?

Ah! Well, I like the idea of being included in the work because it shows my contributions as a character in the paintings, doing activities such as splits or interacting with the police. My presence in a painting means that I’m there to solve a problem. If there is a war or a disaster, and I’m one of the characters, I need to help. In my work, we’re all friends and family. When I add myself, I’m coming in as a son, father, or cousin.

What does it mean for you to include different depictions of yourself alongside fictional characters, like Bad Billy, whom you’ve created?

Bad Billy is a character I manufactured into a superman with a nom de guerre. He and Raynes work in the current timeline, 3.2. He is actually a version of a guy I once knew named Bill. I like the idea that he was a real person. In my work Bad Billy is a father, a lover, and an artist who represents wisdom and power. There are many versions of “Bill” and “William,” who appear as different forms of this character Bad Billy, but they’re all based on one man. Bad Billy embodies the ultimate ruling historical figure with a lot of power and is very involved with his government. He is the kind of guy who sets up a dynasty and has other people serve as his proxies. He ruled for 500 years, until others gained possession of his world.

I’ve become more interested in including female figures. I’ve been developing new characters based on my mother and grandmother. I would like to add my aunts too. I imagine they would meet me at certain points in a given timeline and rise to power. Right now, I have ideas for eight different characters they can play.

Why did you decide to include dinosaurs and how do they function in your work?

I included dinosaurs as an exploration of the ultimate relationship between man and the wild kingdom. In my paintings, dinosaurs are owned by humans. The dinosaurs are, like dogs, very personable—they have a lot of character and add a touch of humor to the world. The dinosaurs know how to communicate with each other, and, if you caught them out in the wilderness, some could talk or come close to talking. Imagine having a pet open the door or helping around the house. That would be wild!

Many of your works reference Christianity and Greek mythology. How do these beliefs come into play in your work?

In the world I’ve created, man and God are friends and get along with one another. God takes a human form and, in this case, can be any number of characters in a human family. Just like people, God has personality and humor. God also occasionally takes the form of an animal, and this animal form can be humanized. For example, there might be a lizard person—any form that can end up doing humanlike work. If it’s an avian form, then a bird could have hands and feet in addition to wings. Each time, God is doing something different and has something to offer.

You’ve broached race relations and the segregation of troops in World War II in a previous painting of General George Patton’s US Third Army. How does your presence as a queer black man in Bill Halsey’s Stigmata (2020) further that exploration?

World War II was brutal as far as race relations are concerned. The troops were segregated, and the roles were not equal. In World War II, there were real nasty things going on. In my timelines, the troops tend to fight together. We’re all in the same boat. In these ultimate timelines, nobody is detained based on race or beliefs. That kind of animosity is wrong. So, in a sense, they might also show a love scene.

Many of the paintings show different kinds of love and sex. How does the legacy of queer representation inform who you paint and how you choose to depict them?

In the love scenes, I show people being close, affectionate, and loving because that’s the way I believe people are. When painting families I show a lot of options: multiple spouses are prevalent, two women are lovers, many men are lovers—everyone participates together. Homosexuality and heterosexuality meet at a happy medium. MacArthur’s on the Beach [2020], which shows three men having sex, is an example of how sexual preferences can coexist. In this world, it’s not unthinkable for a man to call another man “lovey,” “dear,” “darling,” “boo”—and it crosses racial divides, too. Everyone shares love.

I’ve noticed that people have become distant. I show the level of closeness people can still have—people in love with each other. I love men, but in my paintings I like to include everyone. Even in timelines where there are enemies, I want to show love and affection. Those arch nemeses might have a shared history of, say, a nuclear holocaust, and they can find commonalties that bring them closer. Love eventually conquers all. Men of different worlds need to work together because we need love to survive. I want people to feel and know that you can come out. You can be open. You can say what you want and express who you are, and someone else can reciprocate. It’s taken us this long, but people are starting to realize that we don’t need to hide. What’s done in the dark will come out in the light.