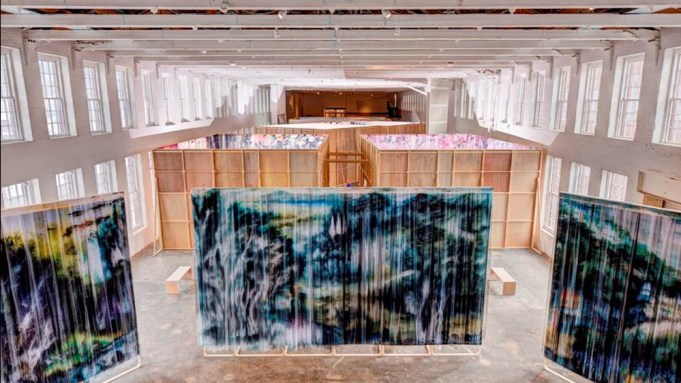 It took 10 years to develop the unique printer used to create the exquisitely rendered veils at the core of Israeli-born artist Izhar Patkin’s survey “The Wandering Veil,” on view at MASS MoCA (through Sept. 1), in North Adams, Mass. Covering 30 years of the artist’s work, the show includes several key pieces from the early 1980s, when Patkin, who moved to New York in 1977, showed with Holly Solomon Gallery. But at its heart is a collaboration between Patkin and the Muslim poet Agha Shahid Ali, who died in 2001 at age 52.

The central veil metaphor, Patkin explained in a conversation with A.i.A., came about because “we were both interested in veils, which we each had previously used in our work, and we decided that the Jew and the Muslim should meet on a veil. We saw the veil as a physical place of meeting, even though it was ethereal. It was a veil that was meant to reveal, not to hide, and then we took it from there.”

The result is a dreamlike array of ghostly chambers, each with four walls curtained with veils—pleated canvases of tulle netting printed with haunting images. Each chamber contains a bench on which rests a sheet of paper bearing the poem that inspired the images. The show begins with a brightly hued life-size sculpture in anodized aluminum of Don Quixote, reading the eponymous Cervantes novel and holding a mirror that reflects his own image, setting the stage for an exhibit that artfully—and poignantly—explores the relationship between fiction, reality and representation.

Patkin recently spoke with A.i.A. about the show at his Manhattan studio.

PHOEBE HOBAN Can you talk about what themes emerged in putting together the show?

HOBAN What do you mean by ghosts?

PATKIN A ghost is an unresolved emotion. Once it is resolved it disappears. I think the role of the artist, the writer, is to suspend ghosts, because that suspends the emotion, the drama and the duration. I think the story of the suspended emotion or ghost that appears to take “revenge”—that is the unresolved story—is probably one of the biggest issues of culture today. We are culturally in a time when most of the works that matter are involved in some sort of cultural correction.

HOBAN Can you walk me through the show?

PATKIN The first room is based on a Pakistani poem that Shahid adapted, called You Tell Us What to Do, which is basically a complaint to God. I took that poem and placed it on the beach between Jaffa, the Arab City, and Tel Aviv, the new Jewish city, and I left all the ghosts of that conflict on the beach, as if they were all living still there, all suspended—from famous images of Holocaust survivors arriving to Palestine to today’s Palestinians on the beaches of Gaza. So there are images from different times mixed together, all as if time stood still and nothing ever got resolved.

The next room is based on the poem Violins, which repeats the word until it becomes “violence,” and I had to find a way to visually show that. My solution was to use the idea of the “theater of war,” a very strange concept. So I have the cellist Pablo Casals performing at the White House, where JFK and Jackie sit, and they are facing three other walls which have warlike scenes of armies and death and destruction.

The room called “The Veil Suite” is about Shahid dying. It’s his requiem, in which he becomes God’s bride. On two walls you have a snow scene that could be Kashmir, and then on the other two walls you have train tracks that go from one side of the room to the other, so it’s a good example of how using a room allowed me to create a visual metaphor that could not be done in a conventional painting. And you have the poet rising with the shadow of a photographer taking his picture, and on the other side you have shadows of a Jesus figure and a ballerina doing a pas de deux. The only figure in the entire piece which is actually painted is the picture of the poet.

HOBAN Can you explain the art historical references of the two last rooms?

PATKIN The room called “The Dead Are Here” is my [Jean-Honoré] Fragonard. It’s the unrequited love story of Laila and Majnoon, the legendary Romeo and Juliet of the East. She is reading his letters, which become tombstones, and he is sitting with his dog, because he stopped talking to humans. I took the format of the famous series by Fragonard, “The Progress of Love,” which happens in a glorious Parisian garden, which I exchanged for a cemetery. For the poem called Evening, my [Joseph Mallord William] Turner, I painted Venice, which for me is a place of freezing time, as in the poem, and a magical moment with Turner’s orange sky. So I have a magician sitting on a gondola releasing clouds of dark birds. He is bringing in the night, which will reignite the cycle of light.

HOBAN What about the sculpture toward the end, the porcelain Madonna cast at Sèvres?

PATKIN The Madonna gave birth to the icon. The Madonna is the icon factory—and my Madonna holds a veil, or a canvas, but it’s empty. There’s no baby there. I left it blank because it represents the moment of potentiality. And I also realized that the Madonna, this figure of motherhood, without the baby, is basically a portrait of many of my female friends who don’t have children. So I see it actually as if by strange luck I was given this very contemporary icon—today’s Madonna and child would not have a child. And from the point of view of the painter, the empty canvas is the moment of potentiality.