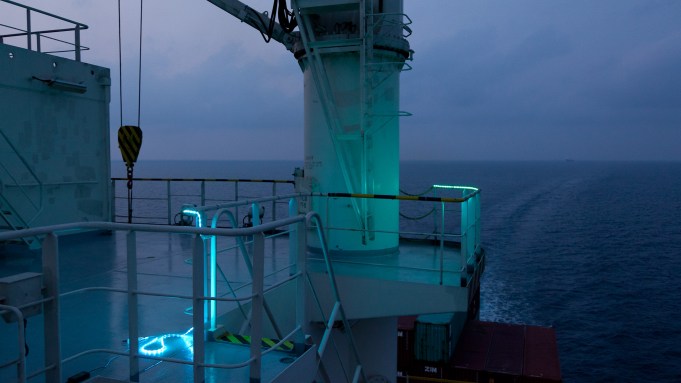 Last month we launched a series of residency reports, asking artists to share their insights about the experience of working in an alternative studio environment. The first two entries came from Zackary Drucker and Juan William Chávez. We planned to run this third and final entry last week, but news was spreading about the situation of Rebecca Moss, an artist participating in a different seabound residency program on a ship that is not allowed to dock because of the shipping company’s bankruptcy. To avoid the appearance of taking part in a sensationalist news cycle, we delayed publication until now. Along with Cohen, van Balen, and the organizers of the Container Artist Residency 01, we offer our wishes for a safe journey to Moss, who released a statement about her predicament on Facebook today. —Eds.

We spent the beginning of the summer at sea, along with nineteen men and four thousand shipping containers packed with electronic, car, and animal parts, all heading to Nigeria.

For the past five years we have been making work in Chinese factories and mines in East Congo. When we boarded a container ship called Dignity at the Port of Hong Kong, we entered the commercial network that connects everything we’ve been occupied with during these years of work and research.

We were participants in the first edition of the Container Artist Residency 01, a unique program that takes place on board commercial cargo ships. Instead of providing studio space at a fixed location, as other programs do, the Container Artist Residency 01 invites artists to produce work while on a voyage. We requested a spot on the shipping route between Africa and China. Our makeshift studio was the electrician’s cabin on the top deck.

The opportunity to work within the global industrial supply chain provided us with the best studio we could imagine. We spent our days reading on the bridge, filming from the deck, and drawing in the officers’ recreation room. There was no internet or phone connection on the ship-just the sea, the crew, and the locked containers full of mysterious objects. It was perfect.

Whenever we neared a port, we would photograph the scene to use as inspiration for large seascapes that we are producing now that we’re back in our London studio by electroplating metals-nickel, copper, gold, and tin-on stainless steel. Prompted by the seventeenth-century Dutch seascapes that depicted scenes of maritime commerce, we are making images using the dissolved minerals that cross the ocean on this route and return from the other side as electronic devices. While we were still at sea, surrounded only by other container ships and petroleum tankers, we also started putting together a new film from fragments of footage taken in the non-place and omni-place that is the backstage of contemporary capitalism, a composition from the perpetual flow of water, salt, soil, and gunpowder.

We became fascinated by the choreography of maintenance on board as the crew continuously painted the deck in a never-ending battle with entropy. The routine felt like a continuation to 75 Watt [2013], a film we made in China where we choreographed laborers’ movements. Our observations of the ship’s maintenance routines fueled our interest in production through industrial movement, which is monotonous, optimized, and standardized, and our research into early time and motion studies that measure efficiency, and current practices on assembly lines and open mines. At ports, we saw how the dance of production is performed by cranes while the humans turn to bureaucracy.

It was often a challenge to find supplies, so we couldn’t spontaneously make things. As part of our film, we used LED strips that we bought in China before we boarded the ship. The lights are the sort of electronic kitsch normally reserved for the consumer-facing end of the supply chain. We planned to go shopping in Singapore during the six hours it took to unload and reload the ship when we needed batteries. But fog delayed our arrival at the port, and we ended up pulling batteries out of gadgets at 5AM in a twenty-four hour mall.

Everyone on the crew was extremely friendly and entertained by our enthusiasm. They told us stories of this route, of containers full of junk and diamonds, of lost loves, of pilots and pirates. At dusk dolphins played in the ship’s wake.

We were the only artists on Dignity, as each resident selected a different route. But in the months before and after the residency we got to know the other participants through geographical coincidences and mutual friends. Somehow a small network and community emerged from this shared experience, even though we never shared physical proximity in space or time.