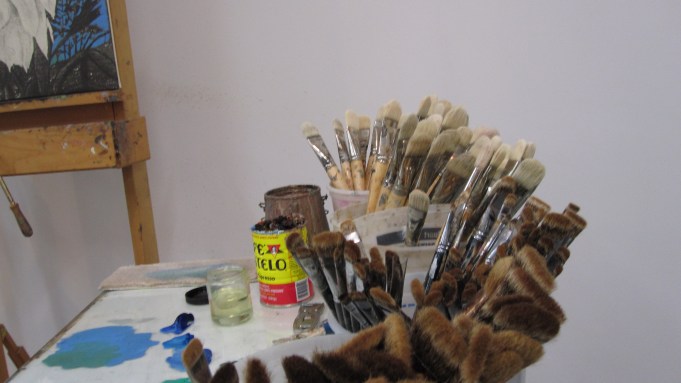 Richard Phillips’ paintings, typically large-scale portraits of women rendered in fetishistic detail, are usually described as hyper- or photorealistic. His working method involves the careful pre-selection of source photos that punctuate Phillips narrative content. But whether he’s painting landscapes, advertising materials or subjects drawn from the history of world war, Phillips doesn’t use photography as a means to an end, or even as a means to figuration. For Phillips, photographic source material is a starting point for an analysis of the types of exchange that happen during representation and beyond it.

Phillips recent series of paintings, “The Five Most Wanted Men,” depicts five famous Hollywood actors selected for their universal sex appeal, which has put toward shlocking commercial products. This new series references to Andy Warhol’s Thirteen Most Wanted Men (1964), which Warhol made for the 1964 New York World’s Fair. Phillips too looks at society’s eroticized margins—Warhol’s series comprised 13 silkscreened photographs of wanted criminals—but looks them at them for the special appeal that has made them the faces of consumption worldwide. Here we discuss such diverse topics as painting technique, Trepanning, and Zac Efron.

NOAH BECKER: Your paintings appear flat, but are built up using layers of under painting. How do you achieve that kind of flat, precise surface?

RICHARD PHILLIPS: I’ll use multiple techniques within single paintings, because the paintings can be quite different, even in the course of a single a show. The imagery can be quite diverse.  I would say it is a combination of pretty standard Venetian painting techniques.

BECKER: In what sense is it Venetian? You mean your use of grisaille?

PHILLIPS: It’s Venetian in the sense that I use a restrained palette, working fat over lean. I only embellish the monochromatic under structure or grisaille layer toward the end of the painting. Brighter colors, and especially flesh tones, allow for that sense of realism to come from the feeling of the material itself, and not from the imitative quality of photorealism. I’ve been called a photo realist and a super realist but I don’t use those techniques at all. It’s just that the end result tends to visually refer to those methods, but they’re structurally built up like architecture of color and form and not really about the imitation of photographic effects.

BECKER: This approach is apparent especially in the way you depict women’s hair. The softness of the surfaces makes it almost possible to guess the brand of hairspray used by the model. These hairstyles also seem intentionally dated and have deep shadows.  How do you paint blonde hair, for example?

PHILLIPS: The hair is painted in a grisaille, in a monochrome with a transparent Umber, so you have your cool brown and then the dark shadows are painted on top with a burnt sienna so you have the combination of those two colors. You are creating a kind of vibration in the shadows.

[Phillips reaches into his record collection and pulls out an LP, Dirty Vegas by the band of the same name; Phillips’ oil painting, Jazz is on the album’s cover.]

PHILLIPS: Did you know I was nominated for a Grammy Award?

BECKER: No, really? How great!

PHILLIPS: Yes, for best cover art but I lost to the Dixie Chicks. And their album cover was just a picture of them.

BECKER: Why did you select these images of male icons for a new series of works? (We look at five portrait drawings leaning against the studio wall.)

PHILLIPS: These are the Most Wanted Men in the World.  It’s a group of my first ever color pastels. The selection process is pretty simple. There is a list of the top five men in the world.

BECKER: Is there a number one man in the world?

PHILLIPS: The number one is probably Robert Pattinson from the Twilight movies. He’s referred to in celebrity blogs as “Pats.”

BECKER: How does one rank the other four men in terms of their appeal?

PHILLIPS: I think that would be much more difficult.  Would Leonardo DiCaprio be the regal king of them all?  He’s actually been through the entire cycle of being a teenage heartthrob. Now with movies like Blood Diamond and his relationship with Scorsese he’s graduated into serious acting.  For the rest it’s all kind of laid there in front of them to do. We have Justin Timberlake, whose appeal as a triple-threat singer, dancer and actor is great. With Zac Efron and 17 again and High School Musical and his penchant for hyper stylized looks he’s all about the future. Chace Crawford from Gossip Girl is an almost Hellenistic icon. His Texas good looks are an absolute staple.

BECKER: Why did you start a series about the five most wanted men?

PHILLIPS: Well it’s obviously most inspired by Warhol’s Thirteen Most Wanted Men (1964). Instead of using anonymous criminals I decided that we would line up these men using paparazzi images taken while standing in front of step-and-pose backdrops. This also relates to the Fundraiser painting from my last show, which featured a nude posing in front of a backdrop featuring the logo for the Kitchen. The real in this case comes more from the fact that these are images that are literally useless. They appear a million times over on celebrity blogs, and their realness or their level of realism has been utterly mitigated by their saturation. These guys step up to these things and the paparazzi blows off a million shots and they have their one look to sell these products.

BECKER: So would you say you’re using figurative works to demonstrate a certain kind of desire and commerciality?

PHILLIPS: Yeah, these guys are the most sought after men right now for their talents and their availability. The photographs locate moments when they’re not acting. They’re not doing anything but using their celebrity to advance commercial agendas.

BECKER: Solipistica Nihilisti is a portrait of Natasha Poly. How do you consider the types of desire in a female model, compared with a male sitter?

PHILLIPS: Natasha Poly who is the Robert Pattinson of the modeling world. She is the number one model in the world right now. So like these five men, her potential as an advertising vehicle is enormous. Her physical perfection becomes an open ended proposition for salability. The symbol of a trepan painted behind the figure’s head references a kind of medical tool for boring into the skull to perform crude early brain surgery. The symbol of the Trepan references this Chicago based marshal industrial group called Luftwaffe and its use of the Trepan on their LP covers. Luftwaffe uses the Trepan as part of the visual identity of the band. Also by linking it to thisunderground music group I am placing her image in a position to sell something that is almost antithetical to her being.

BECKER: One could draw comparisons between your Solipistica Nihilisti painting of  Natasha Poly and the most wanted men in terms of figuration used as pop or sexual iconography. But her intense European looks are a very different experience when compared to the boyish Zac Efron.

PHILLIPS: Her make-up looks almost like a death mask on her otherwise perfect bone structure. There is an internal conflict in that the Trepan symbol is actually piercing through her head sideways. But at the same time the solipsism and the nihilism in the title refers to the essence of fashion and its alienating quality in terms of its commercial appeal.  So the painting in a way accomplishes a couple of things simultaneously and because of its composition is literally resting on its own beauty or its own advertising. So it’s kind of a non-pop image, it couldn’t be further form pop in a certain sense.

Noah Becker is the editor of Whitehot Magazine.