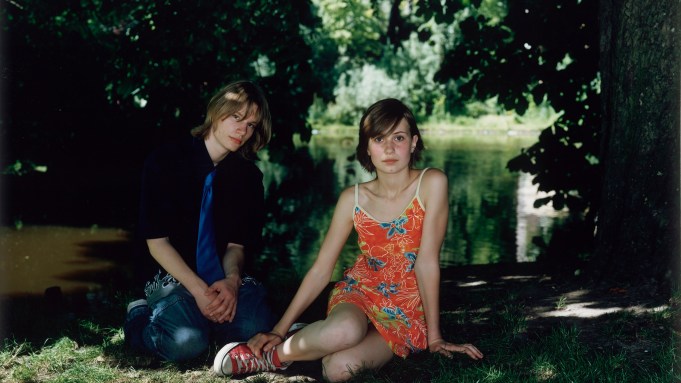 Writing in the catalogue for Rineke Dijkstra’s retrospective, which she co-organized, SF MOMA senior curator of photography Sandra Philips likens the artist’s portraits to 7th century icon paintings. The plain representation of both, she argues, “demands to be read.” They are images that, in spite of our collective reserve about the facticity of images, turn careful observation of body language and facial expression to human nature.

Nearly every one of Dijkstra’s hundreds of portraits features a subject with a frontal gaze, standing or seated against a blank or general background to eliminate distraction. She uses flash, even in daylight, to draw every detail out of the shadows. The photographs are precise to the point of appearing clinical, and encourage examination of her specimens. But science is not without drama, and a deep tension lies in each unmasking of a subject.

Dijkstra’s work can seem to create an index. For her 1994 series “The Buzz Club,” she catalogued teenagers in a single Liverpool nightclub. Another body of work from that year, “Almerisa” presents the coming of age of a young girl. Beyond the categories she uses to initiate each series, Dijkstra’s work hints at a wider spectrum of human vulnerability.

More than anything Dijkstra’s work speaks to the human desire to look at and understand one another. Her retrospective is on view at the Guggenheim through Oct. 8.

SABINE MIRLESSE Do you remember the first “good photo” you ever you took?

RINEKE DIJKSTRA Yes. It was a long time ago. I think it was in 1980, before I went to art school. I was studying to become an art teacher, and I had only recently discovered photography. I wanted to photograph people but I had always been very shy and found it very difficult. So I was doing a photography course, and I went to Rome with my school for a weeklong excursion, and my photography teacher suggested I take that opportunity to focus on what I really wanted to do. The first pictures I took of people were always taken from the back; I was too shy to ask them. This time in Rome was the first time I took pictures from the front… and I think there were some good ones.

MIRLESSE What at this time got you interested in photography?

DIJKSTRA What I really like about photography is that it’s about looking. In those early days I was working with a 35-mm camera, and I liked simply keeping it in front of my eye and looking at the world through a frame. It meant I was able to isolate things from their context. The frame created another world.

MIRLESSE Who has made a significant impact on your work?

DIJKSTRA When I was an art student there were a few big influences, but the very first was Bruce Davidson. He was my first favorite photographer: East 100th street (1966–1968); beautiful black and whites. He was such a humanist. Then there was Irving Penn, Richard Avedon and then some of those French photographers, of course. I really liked Doisneau. Later on I discovered Diane Arbus—in 1983 or so. And then, after that, I discovered August Sander around 1994. He is one of my favorite photographers now.

MIRLESSE Richard Avedon and Irving Penn are both well known for their fashion work-was that part of their appeal for you?

DIJKSTRA No, I was more interested in the people and in the portraits. I was always into portraits from the very beginning.

MIRLESSE How does the Dutch landscape and the tradition of Dutch work on landscape affect your image?

DIJKSTRA I’m very much into landscape. I often go to a hotel in Corsica that I like a lot. I always go to the same spot. It has a view that is very beautiful. For photography I can be anywhere-I make a lot of work in Liverpool for example. What I like about Liverpool is the scale. It’s not too big and not too small. New York has almost too much going on and I feel intimidated.

MIRLESSE Did you grow up learning about Dutch painting? How do those painterly conventions impress upon your images?

DIJKSTRA When I was studying there was photography and there was art, but photography was not considered art. So at the art school the photography department was an island. We ourselves were not very concerned with whether it was art or not art. It was a world on its own.

MIRLESSE This is at the Gerrit Rietveld Academie?

DIJKSTRA Yes. Now of course it’s completely different. I never thought I was into old paintings either, but if you go to the Rijksmuseum and you see what they use there in terms of light-it becomes clear that light has certainly always been an issue here in the Netherlands. Living here, the landscape is so flat, so you always see a lot of sky. There is always loads and loads of sky here.

MIRLESSE You had a European retrospective five years ago. How does the experience of summing up your career so far impact the way you consider making new work?

DIJKSTRA In a way it helps. You see everything together and you look at it all with some distance. You can see what else you’d like to add. I never want to repeat myself.

MIRLESSE For the Guggenheim and SFMOMA, how did you and the curators go about selecting what goes in and what doesn’t?

DIJKSTRA It’s very simple, it’s everything! There are a couple things I didn’t include-a selection was made from each of the series. For instance, we could only include a few portraits from “Mothers” series (1994).

MIRLESSE Are you in touch with the children from those pictures? How do those kids now feel about the photographs you took?

DIJKSTRA They like them. It’s more a portrait of their mothers. There is an interview with one of the boys featured in the Guggenheim’s catalogue the first one I did in the series. It was right after giving birth-a mere 30 minutes after. The flash went off and the baby responded to it. He wasn’t crying but more just moving every time it flashed. Now, years later, he seems to be crazy about fireworks and laser lights. So it was an influence somehow.

MIRLESSE What is your relationship to most of these people, do you keep in touch with them? Are they friends? Are they total strangers? Do they become friends?

DIJKSTRA There is one girl from a photograph (VondeIpark, 2005) I took—of a couple in the park—that I became friends with after becoming friends first with her parents, and I have dinner with her and her sisters once a year. Also, I still see Almerisa, the Bosnian girl I don’t think it’s necessarily important for a photographer to keep in touch with every single person they photograph. It would be impossible to keep in touch with everybody. But with some of them I email back and forth still and it is nice. But it doesn’t say anything about the quality of the photograph. There was one girl for instance from Liverpool who I photographed about 18 years ago who sent me an email a few years ago.

When you take a photograph of somebody you have a relationship with the picture, not necessarily with them. Most of the people you don’t see ever again.

MIRLESSE When people think of your work one of the very foremost projects that comes to mind, if not the foremost, is the “Beach Portraits” series. It was, to my understanding, your first major work. How do you feel about those pictures now?

DIJKSTRA I still think they are really good. In that moment I was still searching for what I wanted to do with my photography. I see them now and I can still feel how I was searching for things. I can also see how specific I wanted to be. It was a good subject-because you had that beautiful background that you could photograph in every country and it was always a sort of documentary moment in time and the people were always different, and yet the same situation.

MIRLESSE Were you thinking of the famous painting by Botticelli’s The Birth of Venus (1486) while you were shooting?

DIJKSTRA No, though I saw a similarity later. I discovered it after I’d taken the picture. You cannot plan those kinds of things. I think it’s better if it happens by accident somehow. I never have a fixed idea when I photograph someone. Of course I have a preconceived notion of the background, and the light, but never the person. I don’t like to give too many directions. For me it’s important that a pose arises sort of unconsciously or naturally.

MIRLESSE How do you approach people to pose for you?

DIJKSTRA I explain what I’m doing. I shoot with a 4 x 5 technical camera. You always have to put it on a tripod. But that camera really helped me because people didn’t know exactly what it was because it looks very different and very professional. On the beach I tried to find people on the spot. For me it’s important to find people already there.

MIRLESSE In recent years you’ve been showing video work in addition to photographs. What were you looking for with video that you felt photography couldn’t satisfy?

DIJKSTRA The first video I made was in 1996, The Buzzclub/Mystery World. I first took photographs in this club but then I thought so much was missing in the picture. It had to do with movement and the whole atmosphere of the club, and so I decided to go back with a video camera but I had no idea what to do. I built a little studio in the back of the club—actually it was just a room with a white wall. Instead of the flash, I used continuous light, and a very simple video camera. I didn’t know what to do because a photograph is a fraction of a second and then a video is of course longer. They had to do something. Some sort of little action-like smoking a cigarette or drinking a beer. There was one couple kissing for example. I had all this footage afterwards and I decided to make it about the evolution of a night at the club. The video starts at ten in the evening and you hear the DJ announcing people’s birthdays and then they start dancing, and then it moves towards a kind of climax. Sound is introduced as well as movement—you can show different things in a video than in a photograph. A photograph is a silent moment. When I’m shooting video, the camera is still fixed in place. Maybe that will change once I become more comfortable with it. But it’s still functioning as an observation of a specific person in a specific situation.

MIRLESSE Would you consider yourself a very ambitious person?

MIRLESSE Is perfectionism necessary for a photographer?

DIJKSTRA You have to be very precise, and you have to never give up. You have to go on and on until you know it’s good. The technical side is very important for me—that I’m getting the very best I can get. In photography you’re also dependent on the equipment and people who print for you. I’m always supervising every detail in that whole process. Everything. I’m on top of the printer. I want it to be perfect.