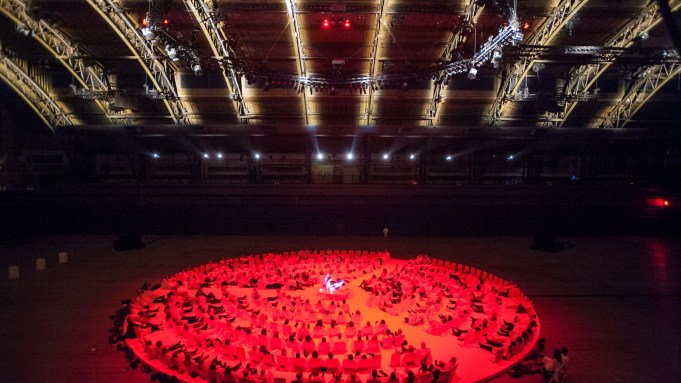 The most recent project by the central artist of the so-called “relational aesthetics” movement, Rirkrit Tiravanija, is a staging at New York’s Park Avenue Armory of “Oktophonie,” a performance of electronic music by the singular, often controversial German composer Karlheinz Stockhausen (through Mar. 27). The music, a 70-minute excerpt of the late composer’s 29-hour opera “Licht,” was intended to be performed in a specially designed chamber with octophonic (8-channel) sound. Tiravanija conceived of a circular stage with a lunar surface to include both the audience and the performers, all-white smocks to be worn by all attendees, and a light show that approximates an eclipse.

I met Tiravanija at the Armory during a snowstorm a few days before Wednesday’s premiere. He ambled through the space for 30 minutes, watching some lighting demonstrations and a rehearsal of the music by longtime Stockhausen collaborator and Dutch flautist Kathinka Pasveer. Afterward, we went to a nearby, regally decorated lounge and played chess while we talked about his concept for the piece.

ROSS SIMONINI Are you a fan of Stockhausen’s music?

RIRKRIT TIRAVANIJA I am. When the project came up, pretty spontaneously, I could see the whole thing, in that second. What you will see in there is pretty much what I saw immediately when they said “Stockhausen.” Weirdly enough, you know? Because it’s a kind of sound sculpture.

SIMONINI The Stockhausen piece is.

TIRAVANIJA Yeah, the piece itself. It’s a kind of arrangement of how sound works in the space. I think Stockhausen even designed a whole round theater, a sphere, which had speakers arranged on it, so you would be in the middle of the sphere. [Laughs] That would be another level to go.

SIMONINI Did you listen to the whole piece and try to respond to it with lighting?

TIRAVANIJA I listened to the whole piece, and I came up with the idea of how the lighting could be. But it’s all, in a way, very tentative, because we don’t have time to rehearse. I was in Thailand, and the lighting designer called me on the phone, and I told him about the image I had. Which is an image, but it’s also an environment. It’s a kind of exchange.

SIMONINI You’ve made some requests of the audience.

TIRAVANIJA I requested that people who came to see the show wear white. But then, of course, that’s a request. Not everyone has a white outfit. So we have a little poncho that people can wear that will do the job. It’s like getting a space suit and going on a trip on a spaceship. Everyone is going to be sitting on this very large disc. There’s no image, so it’s just going to be a kind of mood. And the mood is lighting. And of course, with the lighting, you’re basically being lit.

SIMONINI You are saying the audience is in the lighting.

SIMONINI How would you describe the experience you were trying to create?

TIRAVANIJA I hope it will be transportive. Like, you will feel like you are floating away, in this mega sound system.

SIMONINI Have you thought about lighting before as a part of your other works?

TIRAVANIJA I think a lot about lighting and usually I just leave it as it is, because it’s against what anyone else would do. Usually I’ll leave all the lights as they were for the last show, without any reason. In this case I wanted to have an eclipse. Actually, what I wanted is an experience as if you’re standing on the moon, and the whole thing goes into a certain kind of darkness. That was my whole image-the experience of going from a certain kind of light to a certain kind of darkness. I think that the composition also has that relationship.

SIMONINI Do you think of this as a collaboration? Even if it’s one-sided and posthumous?

TIRAVANIJA The piece is very much set up to be a sensory experience. You’re sitting in the middle of an array of six to eight speakers. I think it’s going to affect you physically. And hopefully it’s going to take you apart, in some way, in your soul. And I don’t mean mood as just a kind of base structure, in a way, but I think that in the combination of different things, coming, being in the space, sitting there, listening to the piece, that you will be transported. I’m always very interested in transcendence. I’m always interested in people crossing the line. It’s very important to transcend yourself.