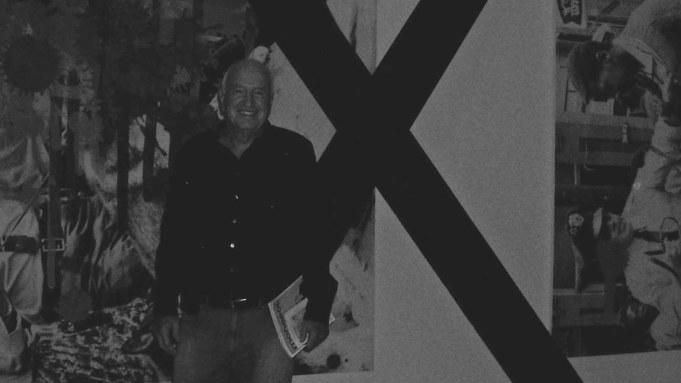 In the late 1960s, Don and Mera Rubell, a newlywed couple living on the upper eastside of New York City, began to share an enthusiasm for contemporary art. On weekends they trafficked the Manhattan grid visiting galleries uptown, in midtown, across-town and downtown. They were on the doorstep of the Paula Cooper Gallery when she opened her first space in 1968 in Soho. In the late 70s, they were drawn to a new group of emerging artists and musicians, and in the 80s frequented the legendary East Village gallery International with Monument, founded by artist friends Elizabeth Koury, Meyer Vaisman and Kent Klamen. By the 90s, they were making routine trips to London, and looked on as Charles Saatchi unveiled “The Impossibility of Death in the Mind of Someone Living,” the now infamous shark-in-suspension by Damien Hirst. 45 years on and they’ve amassed a collection that numbers over 1,000 works of contemporary art from around the globe.

DON RUBELL AND MERA RUBELL IN THEIR COLLECTION. PHOTOS BY MARY BARONE

On December 2, 2009, Don and Mera Rubell unveiled “Beg, Borrow and Steal,” a special exhibition curated from their permanent collection (Rubell special exhibitions are Miami perennials during Art Basel Miami Beach). The exhibition features 260 works by 74 artists and occupies all 28 galleries at the 45,000-square-foot Rubell Family Collection (RFC), located in Miami’s Wynnwood District. The title, “Beg, Borrow and Steal,” was inspired by Picasso’s quote “Good artists borrow, great artists steal,” and came out of conversations between the Rubells and artists Kelley Walker and Wade Guyton. Walker and Guyton (both of whom appear in this show) described how artists like Cady Noland, Marcel Duchamp and Andy Warhol expanded artistic possibilities for appropriation and outright reproduction. Conceived in 2005, “Beg, Borrow and Steal” further explores the current of artistic influence by looking at what artists choose to borrow or steal and from whom and how these choices become a reflection of their own making.

We caught up with Don and Mera Rubell at the RFC as they opened the exhibition:

MARY BARONE: You’ve collected art for 45 years. What was the first piece you bought?

DON AND MERA RUBELL: A painting by a young Irish artist, Ira Kaufman. Although he never achieved fame and glory, we have the painting to this day.

BARONE:  Were you drawn immediately to the artwork or did the art dealer sway influence over your choice?

RUBELL: We bought it directly from the artist. In those days, artists still had storefronts in New York, and you would stumble upon them.

BARONE: You stumbled upon Jeff Koons  early on.  Was it at International with Monument, who I believe were the first to show him, or was it from the studio?

RUBELL: The first Koons piece we bought was “Pre-New Vacuum Cleaner.” We saw it at an exhibition across the street from Barneys. He rented a railroad apartment and painted it pristine white and filled it with objects illuminated by fluorescent lighting. Unfortunately we intended to buy three pieces, but we didn’t have the strength to move the washing machine or the fridge. So we ended up with just the vacuum cleaner.

BARONE: You call your museum The Rubell Family Collection. Do you consult with your children when you’re considering a new acquisition?

RUBELL: No work is bought without complete consensus of the family. Sometimes some of us may have a stronger initial opinion but all opinions are weighed equally and any opinion has to be defended by the individual. In general, consensus does not involve any major battles.

BARONE: The curatorial strategy for “Beg, Borrow and Steal” came out of your conversations with Wade Guyton and Kelley Walker. Where would you meet up? Were there any hiccups in ‘borrowing’ the idea to form the current exhibition?

RUBELL: We first met them in a studio that they shared. Inherent in their philosophy is a willingness to share ideas, and point of fact, this is an idea that has been in the art world for a long time as shown by works in the exhibition. The current exhibition has 260 works by 74 artists dating between 1964 and the present. Since almost all the works were brought close to the time of their conception, it allows for a real-time view of the issues underlying appropriation both as it refers to other artists and the media in general.

BARONE:  Your commitment to art and your investment in Miami has brought a great deal to the city.  Were you instrumental in bringing Art Basel here.

RUBELL: Actually, the original idea for Art Basel was thought of by Mera and I must admit that we all thought she was crazy, but she convinced us, and although it took more time, she convinced the then Mayor Kasdan of Miami Beach to come on board and asked the staff and board of Art Basel to come to Miami and the rest is history.

BARONE: Is there any particular work you’re vying for from this Art Basel Miami Beach?

RUBELL: Unfortunately Art Basel always has good work, and unfortunately again, this year is no exception. We have bought several pieces, including work by Rashid Johnson, Elad Lassry, and Aaron Curry. There are several more that we are in the process of negotiating.