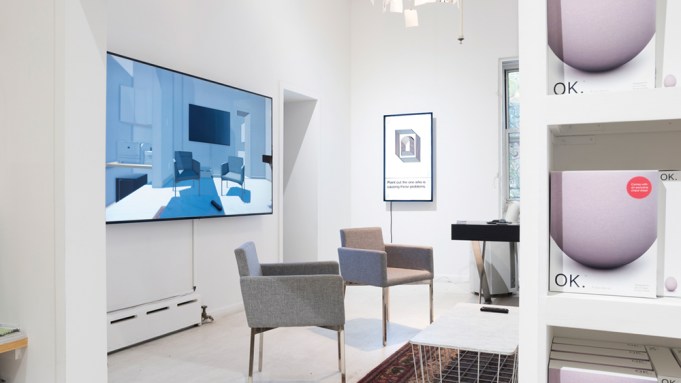 On July 16, new media artist Ryan Kuo and media scholar Wendy Hui Kyong Chun met at the Art in America offices. Kuo’s interactive, computer-based software artworks investigate whiteness: OK. (2018-2019), for instance, gathers user input through dialogue boxes to algorithmically generate monologues typical of a white speaker. A sample output reads, “And also my rightful claim on this document which authorizes an accurate description of my rightful claim on anyone.” Kuo’s Family Maker (2017-18) software navigates family dynamics, and The Way I See It (2017) is a real-time computer-generated game that doesn’t take user input. Kuo probes software’s limited or nonexistent input options, which he compares to trying to assert one’s agency as a person of color in a racist society. Below, the two discuss his works in light of Chun’s research framing race as technology.

RYAN KUO I made “Pointer” to sarcastically imitate an attitude that I’ve encountered among white people. It was a commission of three software works for the bitforms gallery office in New York. One of them, OK., is a procedural whiteness simulator: it builds a white monologue through input from dialogue boxes with limited options. It’s accompanied by editioned software boxes, which were translated into Chinese. That the box could be translated into Chinese points to the idea that whiteness isn’t culturally specific; its symptoms cross geographical boundaries and are recognizable across languages.

CHUN Have you ever thought about global whiteness in relation to K-pop? There’s a critique of how plastic surgery is used within certain Asian cultures, as with K-pop stars, that what they’re trying to imitate isn’t necessarily the reality of whiteness. Does this phenomenon resonate with the reception of your work?

KUO People outside the United States tend to recognize not necessarily what is signified in my work, but more the mode of address. In OK., you’re being talked at rather than engaging in a conversation: a global power dynamic.

The South Korean government has heavily promoted K-pop as an export. It’s packaged to be legible globally, and you can easily get into K-pop knowing nothing about Korean culture. Similarly, in my work, I’m using forms that have also been designed for legibility.

CHUN You talk about whiteness as a pointer, something that always points elsewhere, insisting, “there’s nothing to see here!” Toni Morrison, in Playing in the Dark: Whiteness and the Literary Imagination [1992], describes whiteness as a goldfish bowl. This beautiful passage on the centrality of whiteness to American literature resonates with your work:

It is as if I had been looking at a fishbowl—the glide and the flick of the golden scales, the green tip, the bolt of white careening back from the gills; the castles at the bottom, surrounded by pebbles and tiny, intricate fronds of green; the barely disturbed water, the flecks of waste and food, the tranquil bubbles traveling to the surface—and suddenly I saw the bowl, the structure that transparently (and invisibly) permits the ordered life it contains to exist in the larger world.

You similarly describe whiteness as a frame, showing how race and racism are perpetuated by things that seem to be outside of race’s content. Do you see a relationship between Morrison’s description and the structural forms of digital media?

KUO Whiteness is commonly described as an unseen backdrop. I was pushing against that with “Pointer.” To describe whiteness as hidden, unseen, or neutral is to call it exactly what it wants to be. I wanted to fashion a paradoxical avatar for whiteness, which is like the mouse pointer: always
visible, but always going somewhere else.

It’s popular to talk about white fragility, which is a bit kind to whiteness, as if whiteness suffers when you turn your gaze on it. These attitudes renew whiteness.

CHUN Like the “OK” button on dialogue boxes. It renews it.

KUO The computer can give you horrible news, and all you can do is click “OK.”

Morrison’s point was that whiteness is not just a backdrop, but a distortion and a container. We’re so fascinated when looking at things inside that we miss the structure.

KUO This speaks to your paper “On Software, or the Persistence of Visual Knowledge” [2005]. You describe software as having two sides: one continually generates visible things, the other obscures the operations of the machine. Software disciplines us into accepting a very simple image of the agency we have. There’s an appealing power to this invisible structure, which is definitely how I’m using software. How do you consider that power?

CHUN My background is actually in hardware engineering, so it’s always baffled me that people think software controls the machine. So much needs to be in place before anything can run. As a trained programmer, I can tell you theoretically what your computer is doing at every level, but I can’t tell you what it’s doing right now. To say something is “like software” is to say it’s like something you cannot understand.

KUO I wonder if I’m someone who’s been traumatized at some point, and I’m just endlessly reproducing these traumas in my work. My earliest conscious memory of being a racialized being was being given the frame, “Oh you’re from that general direction of the world, so you must eat these types of things and think these types of things. And do you speak English?”

CHUN They asked you that in English?

KUO Yeah. This is a call and response, so I have to gratify this call: I can agree, because what do I know? Maybe they know better than I do. Or I can resist, but maybe I don’t know what to resist it with because I’m a child and don’t have enough evidence accrued. My experience of being in America, as I’ve tried to show, involves navigating these different frames.

Similarly, Family Maker comprises infinite pop-up windows. It reflects on family tensions; it’s too much to process each member’s feelings and perspectives at the same time, so they’re broken up into windows. It’s a runtime engine, which means each time I play I’m building and scripting the work, just like building a family: you can’t undo your mistakes.

The pop-up window gives you options to click through: the family might start with “father,” then he might have fears, but the control button for “fears” could be disabled. He might modulate them indirectly by making plans. Maybe he works hard, then he’s given the option to look for love, but there’s nothing there yet. He’s too selfish for love, so he has to go and uncheck “selfish.” Then he finds a wife. She trails father, and doesn’t reveal herself when you confront her directly. Their son can’t be controlled, which impacts the father’s emotions. Father’s options are to work, play, or hit things with a stick.

CHUN You’ve set up a bunch of frames for people to project onto. That void is emblematic of the way you push whiteness or banality to a certain end, taking these frames as voids and talking about whiteness as a sort of framing itself, and as a failure of affect.

KUO I’m definitely thinking of the frame as a void, as devoid of something: not a blank slate, but something with a hole that wants to be filled with something from me.

CHUN A lot of what falls under the rubric of software art is supposed to run by itself. Family Maker unfolds through your interaction, which is key to probing what software is.

KUO The Way I See It is a game that doesn’t take player input. It shows 3D-modeled Ikea pieces engaging in erotic or violent acts. A Docksta table rolls around on the floor with three Lack tables either caressing or wrestling it. This effect is produced by trapping the furniture inside invisible walls that confine their movements. This process highlights a tension between control and agency that speaks to what it feels like to be a person whose agency is in question. It also nods to the Ikea hack (customizations of Ikea furniture, usually from online instructions), and the patronizing idea of an empowered consumer. You can only hack it so much.

CHUN One argument about race and technology goes like this: if you focus on what’s blatantly racist about technology, you miss the point. Twitter is fueled by controversy: racism and activism alike. If we only focus on getting Twitter to address the racist controversies, we miss the larger racist structure of the technology industry. Like Morrison with the goldfish bowl, like you with the frame, I think it’s more strategic to address not what seems so blatantly obvious, but rather to look at the structures that regenerate racism.

KUO Rather than focus on the pathology of and the damage done by whiteness, I’ve tried to call whiteness an affective failure. It’s hard to talk about what whiteness appears to be without talking about what it does to you.

CHUN When I argued for race as technology, I meant that we should move away from trying to understand what race is, and move toward what race does. In the past, race was very much a sorting technology. In the eighteenth century, it was a way to argue that you can read innate characters based on physical traces. What does it mean to understand race as techne—as something that makes things possible? That’s different than occupying an identity.

KUO I’ve been thinking about this white label of Asians as a model minority, and racialization as a type of modeling. Growing up in an overtly racist town, I’d get the eye thing, where they pull their eyes to make them slits. That’s an act of physical modeling, where the white person tells you, in an apelike fashion, that they see you as a defective model.

CHUN Homi Bhabha has talked about this in the postcolonial Indian context. Colonizers said, “be like me, but you can never be me.” It’s a call to model what is unattainable, a continual regeneration. Similarly, your software is indefinitely regenerating.

KUO That makes “model minority” sound like it’s actually a model of racism!

CHUN It’s also fascinating that “model minority” has been applied across the socioeconomic spectrum of Asian Americans.

I’ve always thought about theory and practice as forms of witnessing: “theory” comes from the Greek word theoroi, which designates a group of official people who were sent to witness and verify events. Similarly, Thomas Keenan [head of the Human Rights Program at Bard College] has argued that we face responsibility not when we apply rules to a situation, but when we need to respond and our rules are inadequate. Are there moments that you felt you’ve needed to respond to in your work?

KUO This is the only way that I can start projects: there’s a complaint that I have. It’s often a complaint about the preponderance of rules that want to go unsaid but are overbearing, imposed, and not working. There’s a hole somewhere in these rule structures; I want to occupy that hole.

This article appears under the title “Whiteness and Software” in the September 2019 issue, pp. 28–30.