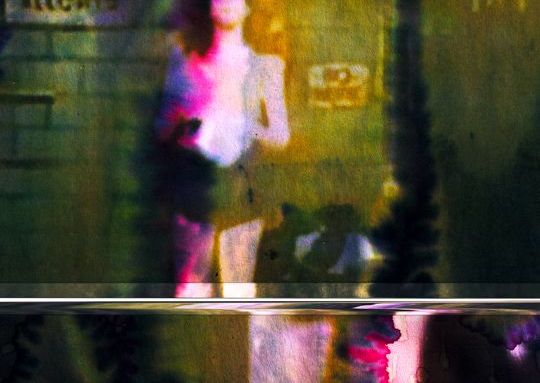 Sara Greenberger Rafferty’s work cobbles together fabricated environments that invoke an intersection of theater, comedy and magic. It’s here that the artist “plans” her accidents. Since 2009, the centerpiece of Greenberger Rafferty’s work has been her “Tears” series, photographs blurred or stained by liquid to near-abstraction. These images begin with a Google search or a video still, which the artist prints and manipulates with water, before scanning and printing yet again, experimenting with various techniques.

In “Remote,” Greenberger Rafferty’s second solo project at Rachel Uffner Gallery, the artist combines her sculptural setups into a full-fledged environment. In the storefront window, a sculptural installation, Window Piece (all works 2011), features a cutout figure surrounded by hovering knives. The artist thrives on creating moments of minor discomfort between danger and disappointment.

ALEXANDER ADLER  Tell me about your use of architecture at Rachel Uffner, particularly your adaptation of the storefront.

SARA GREENBERGER RAFFERTY  I wanted to draw people in and take advantage of the storefront space. I tried using a window during my 2009 show here but ended up taking the work down. This time, I envisioned the installation as a kind of magic trick. I’m installing a work on Plexiglas titled Window Piece. I’ve had a fabricator create a cutout of a human figure with knives angled towards it. It’s a street show, by and large differentiated from the works inside the gallery.

ADLER What is the role of violence in your work?

GREENBERGER RAFFERTY  The knives, bloody or bleeding, look active, oozing in the toxic palette that I’ve been working with in photos over the past few years. I use the process of color bleeding or waterlogging, staining or spilling to stand in for malfunction or damage. In this case, after the process, I see the blunted edge of a knife rendered functionless through obscuration. While it appears as a directional attack on the figure, it’s really a fruitless assault on the absence of being.

ADLER  Does the figure in Window Piece relate to you at all in terms of height? Is it an invocation of self?

GREENBERGER RAFFERTY  It’s not important if it’s me or not-just that it’s a diminutive figure. In the back of the gallery, I’ve installed a series of figures calibrated to be about 5 feet tall also, printed on acetate. In the past, I’ve worked with the concept of Houdini and the physical implications of size or lack thereof. I think it’s interesting, the way height is considered in relation to art. Five feet is, of course, 60 inches: the standard center of an artwork hung on a wall.

ADLER  It seems that all the work in this show relates to the human figure.

GREENBERGER RAFFERTY  Not so much in the case of Frame, which is a distorted image of a frame on half-inch Plexiglas. The process used to create these is called “direct substrate printing” and incorporates encapsulated ink—inkjet—on an industrial scale printed on special Plexi and acetate that is coated to accept these inks. Negative space that is clear becomes white when mounted on the walls.

I was thinking about “props,” which is a term I use to describe the actual pieces of paper and other materials used to make my photographic work but can also be theatrical objects, including but not limited to glasses, any apparel (also a considered costume), a frame, a knife, handcuff, shotgun, whoopee cushion . . . . Usually I’m using items like knives or guns that play roles in both comedy and tragedy.

ADLER Who are the people in your waterlogged photographs?

GREENBERGER RAFFERTY Mostly people from movies or television. This time around, all the photos are titled with a unisex name—Jamie, Alex and so on.

The names came from the book Orlando by Virginia Woolf and the idea of nebulous gender identity-not in a cross-dressing way but in a kind of period way. I like the description of color and props in Orlando as the book carries on. I also wanted to de-emphasize the identity of the source image. I’ve always used known people in my work primarily because I think they’ve entered a public consciousness, so these characters can be cast without subjecting them to any sort of unrealistic or unfamiliar discomfort. I could appropriate pictures of civilians from Facebook or whatever, but I question the ethics of that.

ADLER  You’ve mentioned that you “cast” the characters in your photographs. Do you have any examples where this is readily apparent?

GREENBERGER RAFFERTY  I hope that it’s somehow apparent in all of the images. I have something I’m trying to elicit from the “actors.” I can’t tell you what it is, unfortunately, because I can’t actually verbalize it-not because I’m trying to be cagey. Maybe it’s a kind of uncanny fan art or cover version. I also hope that, in the end, all of the pictures look like the awkward—sometimes wonderful, sometimes painful—condition of being one single person in a specific body in the world.

ADLER  But how can you sustain this narrative if the images are so fragmented?

GREENBERGER RAFFERTY  They’re more fucked up, destroyed. The images are less legible. The images are seamless and glossy; I’m using glossy paper, which is associated with commercial and not fine art photography. Since the work is very much about television, plasticity, display and, to some degree, the grotesque, it seems fitting. It’s important to me that the work is an image of something degraded. It’s the idea of pathos versus being truly pathetic. If an object is made poorly then it’s pathetic, but if it’s an object made well but depicting something deformed, fucked up, unstable then hopefully viewers have a way to relate without feeling completely decimated or depressed.

GREENBERGER RAFFERTY  With Sam and Orlando, the source image is from a television show called “Sons of Anarchy” on FX, which is one of my favorites, along with “Top Chef” and “Dexter.” In Orlando, I love this kind of Mona Lisa or weird smile that I got with this planned accident technique. Many of the images came from YouTube or video stills.

ADLER  Why is it important to you that your figures move toward abstraction?

GREENBERGER RAFFERTY  My images are falling apart and hazy but I can still see what things are. I’m not interested in making something not recognizable as a human figure or face. But in terms of the actual actor’s identity, I don’t care.

ADLER  The catalogue says that you not only “take liberties by manipulating images of famous people, but the images [you] select, often downloaded from the Internet, seem to be chosen for the way they capture someone letting down their guard (simultaneously showing their inner and outer selves), wearing heightened expressions of despondency, horror, rage, or jubilation.” What do you find interesting about these moments of vulnerability? Which works reflect this?

GREENBERGER RAFFERTY  I’m interested in the way that people function as themselves in public. I think that’s why I am interested in vulnerability or the letting down of guard. It’s how people don’t want to be seen in culture.