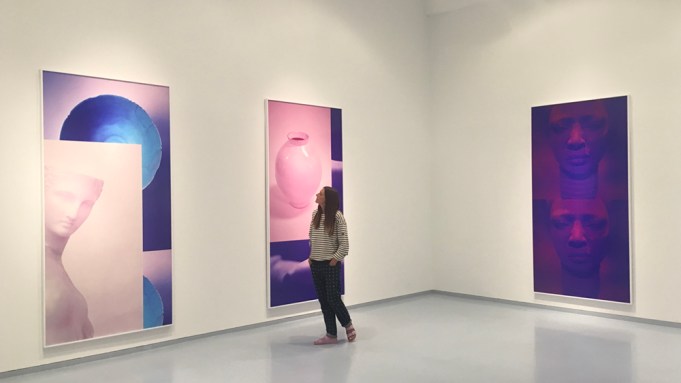 Sara VanDerBeek’s exhibition “Women & Museums,” on view at Metro Pictures, New York, through October 5, consists of six large photographic prints. All vertically oriented and cast in the pinks and blues of sunset, the images depict objects representing women and made by women. VanDerBeek selected the pieces in her photographs from the holdings of the Minneapolis Institute of Art (Mia), as well as European institutions including the Ashmolean Museum in Oxford, and the Farnese Collection in Naples. “Women & Museums” is an ongoing series. It debuted this past spring in an exhibition at Mia, where the photographs were shown alongside objects from the museum’s collection.Below, the artist discusses her photographic process and research on depictions of women over time.

Curator Yasufumi Nakamori invited me to develop a project using Mia’s collection, so I visited several times over two years. The invitation came right around the time I gave birth to my daughter, Lee, and underwent a total reappraisal of my own body. I started thinking about symbols of reproduction and the figure, especially the female figure, as among the earliest forms represented in art. During my time in Mia’s collections, I photographed works by or depicting women, making intuitive, not linear, arrangements and choices. Mia is an encyclopedic museum, with galleries designed to flow continuously through times and cultures, and I likewise approached my photographs as a continuum, trying to capture a sense of a larger whole while also honoring each object’s specificity.

Women & Museums II shows a Cycladic figure from the second millennium BCE, now housed in the Ashmolean Museum, and a seventeenth-century Korean moon vase from Mia. Cycladic figures predominantly depict women, many in early stages of pregnancy. My juxtaposition highlights the parallel between pregnancy and vessels. The figures are typically shown upright in museums, even though they’re actually unable to stand and have to be supported by armatures. They are funerary figures that were buried in the ground, so I photographed this one lying supine. Archaeologists are perplexed by the function of pregnant funerary figures.

Many of the objects I chose had ceremonial or spiritual functions in addition to utilitarian ones. For Women & Museums V,I photographed a 1968 seed vessel by Lucy M. Lewis. She was a phenomenal artist from the Acoma Pueblo who worked throughout the twentieth century. I got to know her work from Juan Lucero who works at Mia—a ceramic artist from the Isleta Pueblo—and from Susan Peterson’s book about her [Lucy M. Lewis: American Indian Potter (Kodansha, 1984)]. It blew my mind that she built this vessel by hand: it’s not thrown on a wheel. Then, she painted her interpretations of ancient water patterns, and I saw her as this amazing translator of the past into the present, which is also what I’m doing. Lewis had nine children and a prolific ceramic practice, all while working at a time when the United States government honored even fewer Native American rights than it does now. It’s a seed jar, so it’s small, but there’s so much power to this object.

I wanted the coloration and the scale to emphasize my mediation of the collection, since I’m projecting my own ideas onto the past. I made the prints so large because I was thinking about the museum space as both fractured and immersive, much like our experience of screens. The way the images are layered conflates foreground and background, and I was thinking about the luminosity of screens with the dye sublimation.

I shoot using medium-format roll film and existing light, then combine images and alter the colors in Photoshop. Some of the objects at Mia were stored with identifying Polaroids that are now faded. For the moon vessel, I created colors that recalled the Polaroid with Julie Pochron, a printer and artist I’ve worked with for thirteen years. The photograph of the twelfth-century Kashan ware in Women & Museums I is fairly naturalistic; the vessel has this amazing glaze. I shot it at dusk and just pushed the contrast. I paired it with a second-century marble sculpture of Aphrodite, and took out all of the warmth to emulate the stone cold of the marble. I altered other colors to move away entirely from any sense of the original object. The Ife shrine head in Women & Museums III is shot in Mia’s galleries under low light, but the walls were red; I pushed the reflected red in the space.

I’m always pulling out the colors of dusk latent in each object. Dusk is a powerful and spiritual time, a crossing of color and light and tone, a moment for reflection. Are we at a dusk moment in history? I was also thinking about the fluidity with which Mia mixes objects within their galleries across time and cultures. It’s important to think about the female form and women’s roles within societies as fluid, as continually forming and reforming since the beginning of our recorded existence. We’re still figuring these roles out. My hope is that showing layered frames implies this constant change, suggesting we’re not in stasis.

LVMH Is Launching an Ultra-Premium Tequila