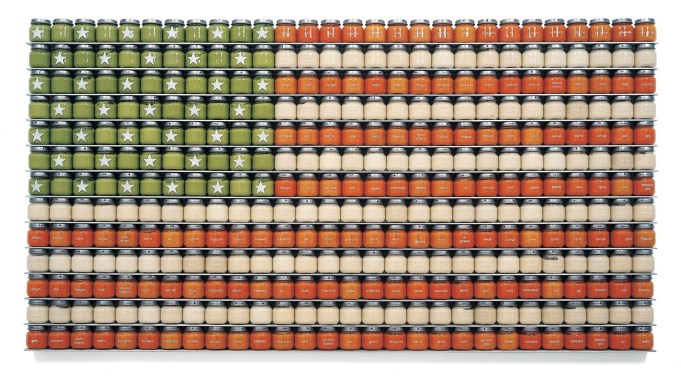 Controversial then, and largely forgotten now, the artist duo Kate Ericson and Mel Ziegler emerged in the early 1980s from the theoretically oriented program at the California Institute of the Arts (CalArts), in Valencia, and pioneered a hybrid form of performance, conceptual and Land art. The pair were partners in life and love, and shocked the art world from New York to North Carolina and California with community-oriented artworks that not only incited political action but inspired social change. In 1989, the artists inscribed a run-down Durham, N.C., sidewalk with the city’s revitalization plan in a project titled Loaded Text—until July 18 it hangs at the Durham History Hub for its 25th anniversary—and then, when the sidewalk was renovated, used the jackhammered concrete fragments to reinforce a crumbling river embankment.

Now categorized as social practice art, their then-unfamiliar approach confused curators and crowds, and often their works were met with contempt. Take, for example, the 1988 Signature Piece installation at New York’s Museum of Modern Art (MoMA), wherein the artists imprinted the signatures of the nameless laborers who manufactured elements of the museum building onto plexiglass panels placed around the museum. “There were literally artists who said ‘you just ruined your career,’ or ‘you’re dead, man, no one is going to be interested in your work anymore,'” Ziegler told A.i.A. in an interview. “It wasn’t the language of the ’80s. Now it’s one of our most well-known pieces.”

Ericson died from brain cancer in 1995 at the age of 39. Ziegler continues to practice solo, and chairs the studio art department at Vanderbilt University, in Nashville, Tenn. MIT Press published a catalogue of Ericson and Ziegler’s work, America Starts Here, in 2006. Now he’s pulled a few of the pair’s seminal works from his personal archive for a show at New York’s Perrotin Gallery (through Aug. 22). These include the paint map from their project Camouflaged History (1991), in which a house just outside the historic district of Charleston, S.C., was painted in a camouflage pattern employing historically approved colors for houses inside the district; the piece served as a commentary on class differences in divergent parts of town. Dark on That Whiteness, an installation of paint jars that was first shown at the 1989 Whitney Biennial, is configured as a map of the Mall in Washington, D.C., in which the colors of each historic building’s exterior comment on American diversity. Also included are some never-before-shown drawings.

Ziegler, 58, spoke with A.i.A. at the Madison Avenue venue about the duo he was part of, classifications of their practice and his own future projects.

JULIE BAUMGARDNER Why do you think now is a good time to show work by you and Kate Ericson?

MEL ZIEGLER I was really reluctant to show. These are some of my prized works that I still own. But after talking to Emmanuel [Perrotin] and seeing what the gallery wanted to do, I was much more open to the idea. I haven’t shown them in a long time, and the works are part of an estate. But it relates to a lot of things happening right now. Our practice really came out of working with communities. Often we would set a system up and the system would take over and make the aesthetic. Collaboration was symbolic of creating a community. That idea of collaboration wasn’t just out of convenience. Two people have a conversation, and that’s the beginning of the community. But we wanted to have conversations outside just the two of us.

BAUMGARDNER At the time, did you know you two were doing something avant-garde?

ZIEGLER I thought of it as an integrative practice. We were looking at ways to integrate our practice into conventional forms that already exist in the world. People we loved and respected were going out to the desert to do earth works. We thought, “Why are you taking work to the middle of nowhere?” We were looking at the world and saying, “We don’t need to build anything, because it’s already there.” We weren’t anti-gallery or -museum, but it wasn’t until we embraced the gallery system in New York that people became interested in our object-based work.

BAUMGARDNER After Kate’s sickness suddenly came on, did you two continue to create work during the treatment?

ZIEGLER We made work until the end. Toward the end, though, she was in a wheelchair. They gave her about six weeks to live, but she recovered in a way that allowed her to live 17 months. Once she got out of the hospital, we moved out to our barn in Pennsylvania. But we were extremely broke, and luckily we had a few people like Michael Klein and Agnes Gund who helped us out. Most people didn’t know because we were isolated. But she had a nice rebound, and we lectured around, including at Wellesley and at Harvard. At a certain point, from the radiation, after about a year, her brain started to deteriorate and I knew that it was the beginning of the end. We would go swimming every day and she couldn’t swim any longer.

BAUMGARDNER How did you transition into your own practice?

ZIEGLER I had to reinvent myself. We had been making a living off our art, and now it was all gone. It wasn’t like I was the intellectual one who came up with the ideas and the other produced-it was a true collaboration. She wanted me to continue with the name, and I wanted to respect her. After a few years, I started teaching. I was offered a position here in New York but I turned it down. The kinds of things I’m doing now are about working with farmers. I’m also creating a residency program called the Sandhills Institute, in a small town in the Nebraska panhandle, that’s truly working with ranchers and farmers.

I grew up on a dairy farm, so I have the language. I never enter these things thinking I have something better than they do, or an ideology that’s better than anyone else’s. I don’t care if they’re corporate farms or individual ones. I’m trying to understand the complexity of it all and it’s not like I’m trying to promote a certain ideology-sometimes social practice tends to do that, and you alienate people in the process. To me, it’s all about the questions and discussions you have.