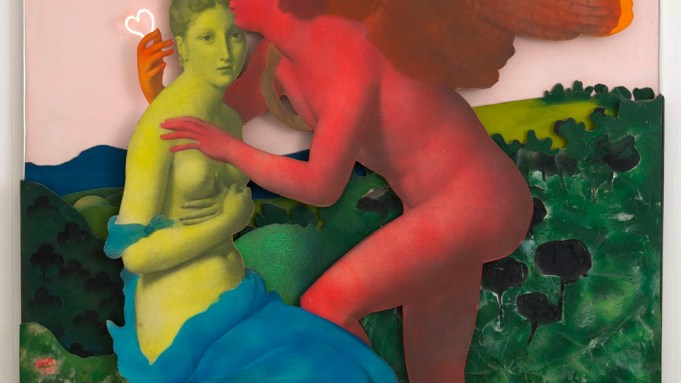 Nice-born artist Martial Raysse began his career by making work that straddled American Pop and French Nouveau Réalisme-a movement that includes him as a founding member. Since then, his work has been categorized-by academics and critics-as French Pop, European Neo Avant Garde and the School of Nice (along with Yves Klein and Arman), to name a few, although, said Raysse via e-mail, “I do not think my work belongs absolutely inside any of these boxes.”

A fixture on the ’60s New York art scene, Raysse returned to France at the end of that decade, inspired in part by the events of May ’68. Since then, his presence in New York has been almost non-existent. Not so in France, where, in 2011, his 1962 painting Last Year in Capri became the most expensive work ever sold by a living French artist, fetching $6.54 million at Christie’s in London. Now in his 77th year, Raysse recently returned to New York for an exhibition of early mixed-medium work, “Martial Raysse: 1960-1974,” at Luxembourg & Dayan (through July 13). The exhibition includes 27 works in mediums ranging from collages and paintings to film and sculpture. The works highlight a fascination with consumer items. Fashion images, found objects, and sculptures illuminated with neon signs mirror the mid-century Western obsession with-and worship of-advertising and commodities.

The first piece one encounters is an assemblage that combines painting, film and sculpture: A propos de New York en Peinturama (1965). A split-screen diptych of sorts, the work is composed of two distinct pieces: a wall piece and a projected film. In the wall piece, two Godard-looking young male filmmakers are rendered in the artist’s signature sherbet hues: watermelon skin on a tangerine background. “I am Mediterranean,” Raysse explained. “Bright and vivid colors are natural for me, and they make me happy. I hoped this was the same for others.”

In the piece, the heads of the two men extend beyond the frame, highlighting a common Raysse trope: the artist’s wall pieces often disturb the iconic rectangular picture plane, driving it toward a more sculptural form. In some works in this exhibition, Raysse accomplishes this by folding back the corners of the canvas, or by removing a corner altogether. In this piece, one man holds a movie camera, and is decorated with a real pink pompom on his cheek, while the lime green hand of the other man pops out of the picture, and points toward their desired target: a pretty, lively blond woman appearing alongside the painting in a Super 8 film projection.

“I had the idea to join cinema and painting,” said Raysse. “And I had already made a painting of Tintoretto’s Susanna, where the tableau of the old men was replaced by a film.” When creating this piece, he said, “The interaction of the painting angled against the projection demanded the piece exist in a sculptural space.” The result is something like Benny Hill meets Simone de Beauvoir at Max’s Kansas City, and, appropriately, there is a celebrity cameo: “The fun of the work is that the character with the puff on his cheek is Jean Tinguely,” said Raysse.

Other works in the show highlight a hallmark of the artist’s ’60s work: the appropriation of old master paintings into multimedium wall pieces that combine oddly shaped canvases and sculptural interventions. In Tableau simple et doux (1965), Raysse reinvents Francois Gérard’s sugar-sweet Cupid and Psyche (1798) by making it even more cloying-instead of a butterfly floating above them, Raysse’s redux has Cupid holding an electric neon pink heart. In 1964, Raysse exhibited works from this series in New York a show called “Made in Japan . . . Horrible Paintings . . . Paintings of Bad Taste.”

“‘Made in Japan’ was related to the notion of the copy,” said Raysse, and to “the idea that painters have always worked in this way. It is an enthralling exercise to remain in the spirit of the original painter while making it one’s purpose to not be identical.”

Many of the works include neon add-ons, including the collage Snack (1964), which features a group of green-and-orange-skinned bathing beauties under a neon sign that says “snack”-the word standing in for a beachside food shack. For an artist who used technology with such alacrity in the ’60s, though, Raysse is of a different mood in 2013. “I think, because of electric lights, television and so on, our capacity to see has waned,” he said. “Raphael did not need high definition or 3D-and neither did the American Indians.

“But I will not enter the fight with technology,” he said. “Painting is of a different order.”

A Curated Guide to Rome: Where to Eat, Stay and Play in the Eternal City