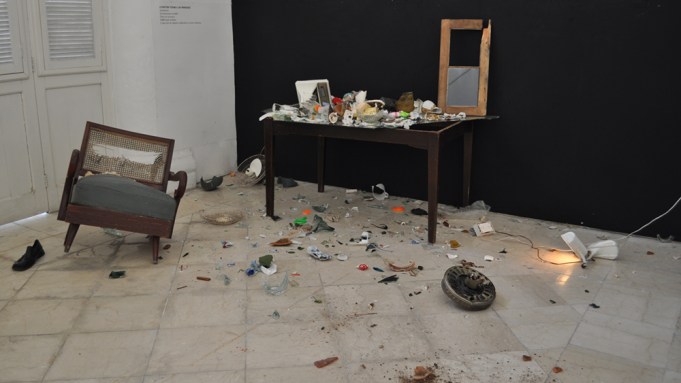 Javier Castro is a Cuban artist whose work has been included in two exhibitions of Cuban art in the United States in 2017: “Wild Noise/Ruido Salvaje,” at the Bronx Museum of the Arts, and the traveling show “Adiós Utopia,” which opens at Minneapolis’s Walker Art Center on November 11. Much of Castro’s artwork details everyday forms of socializing and survival in the Old Havana blocks where he lives and works (he currently divides his time between Cuba and the United States). Brief video sketches plumb contemporary life as it manifests in local visual culture: prison tattoos of Chinese characters or citations from reggaetón songs; gold crowns covering rotting teeth; poses struck on street corners. More recently Castro has turned to installations of household objects that abstract abiding concerns about violence and intimacy. On a recent trip to Havana I met with Castro on his thirty-third birthday, and he graciously agreed to talk with me before heading out to celebrate.

RACHEL L. PRICE  You’re someone whose artwork engages closely with your immediate environment. You moved to Miami in 2015 because you won a grant from the Cisneros Fontanels Art Foundation, which included a three-month residency at the nonprofit Cannonball. Did that experience change your work at all?

JAVIER CASTRO  I was at a point where I felt saturated with what I knew, with Havana, and wanted to make a radical change. So I arrived in a context where I knew nothing, and started from zero. When I returned to Havana it was like discovering the city with wholly new eyes. It was like time travel, too, because going to Miami is like seeing what Havana will be.

PRICE  New buildings in Miami have a flashy, modern look. By contrast, I was just at the bar Roma, which is in a worn out solar [tenement] that was formerly a hotel. The owner broke down some exterior walls so the bar now looks out over the old city. Being there feels like a preview of what more historic neighborhoods like Old Havana will become as the value of real estate continues to shoot up.

CASTRO  We’ll have to see. But I’m definitely witnessing certain things that never existed before in Havana’s culture—certainly not during the revolutionary period—which are appearing almost overnight. Now you see four or five cranes on the shore, which were never there before. Hotels are being built, there are sailboats in the bay, you hear more English. There’s also a gentrification process underway. A business like Roma is worthwhile, because it depends on the presence and labor of people from the neighboring apartments. It integrates the community into the business, and it allows the neighbors to stay in the building and not be displaced. We need to adapt and think of projects that can survive the radical economic shifts, so that those who live here aren’t displaced as new businesses are created.

PRICE  These issues are close to your work, which is often rooted in your neighborhood.

CASTRO  I’ve always worked in Old Havana, and especially my neighborhood, San Isidro, which is famous both as the site of [Cuban writer and patriot] José Martí’s childhood home, and the birthplace and murder scene of Alberto Yarini, Cuba’s most famous pimp. The birthplace of the national hero and the national pimp: I grew up around these two figures. We always saw Martí as one more neighbor rather than as a hero. Coming up in San Isidro I played and fought like everyone else. But my parents had a rule: I could play outside, but inside the house there was discipline, with the idea that I could achieve something more and get out of there. Not get out of the neighborhood, which we all love and have never wanted to leave, but do something more intellectually.

I always wanted to be an artist. My preparation for entering the San Alejandro Academy was drawing my neighbors. I had no studio or private space, so I sat in the street and drew. It became a kind of collective creative process in which neighbors would ask me to draw them in certain ways: “Hey, get rid of that wrinkle,” “Make my hair like this…”

At San Alejandro my thesis focused on questions of power. When I moved on to the Instituto Superior de Arte I grew interested in video, because I wanted to capture reality in the most immediate way possible. Or re-create it. If I’d seen something and hadn’t been able to capture it, I’d try to restage it with the same individuals, who weren’t actors. From this project emerged questions about the economy, language, sexuality, the dynamics of street violence and domestic violence. All of this then became an exploration of strategies for getting by in Havana, which in some sense has always been my studio.

PRICE  Tell me a bit about what you were after in the video I’m Not Afraid of Eternity [2006]. Is it an exploration of the line between photography and video, or something else?

CASTRO  In my neighborhood there’s always pressure to front, to strike a pose, to intimidate an enemy. I thought of the phrase “I’m not afraid of eternity,” meaning I’m not afraid of anything. I’m here on the corner, ready to be killed, or go to prison, or attack someone. I asked people to interpret that phrase and to assume a pose for the camera. They stand still in the video, but reality moves all around them. The work plays with the idea of what eternity means to them. It also plays with the lack of productivity in Cuba. People have decided at some point, in the face of the insufficiencies or dysfunction of the system, not to work for it, and instead try to work for themselves. They’re looking for other means of survival, ways to apparently do nothing while actually doing something-hustling. That’s how everything works here. Everything.

PRICE  What are you working on now?

CASTRO  My current projects stem from similar concerns, but focus on telecommunications in Cuba: what the introduction of the internet in Cuba has been like, and how people are assimilating it into their lives. Issues like privacy and public space are central. Private spaces are rare so people invent them.

PRICE  The housing shortage means that several generations will often live together under one roof. And to access the internet, you need to go to public Wi-Fi hotspots.

CASTRO  Right. So you might find yourself in some field, or in a park trying to create privacy, to talk to your partner on the phone. I’m working on this project with David Osthoff, an Austrian artist who has another perspective. He’s from a society that has already gone through this and is now looking for ways to forge connections, since everyone there has been totally isolated by technology.

Here, though, we’re still trying to acquire technology. But the way it’s happening is really weird, because it’s all in completely public spaces. You find out everything about everyone’s lives. People aren’t afraid to tell you about how they steal Wi-Fi from the hotels and resell the connections, how they will rent you a cable to charge your phone while someone else leases out the bench you’re sitting on. The alternative forms of accessing the internet are generating secondary businesses. All of this is going to change, very soon, and should be documented. We’re working on a documentary about it and some installations.

I’m also working on a piece that has to do with how knives are used in Cuba, from the culinary realm to weaponry. And another in collaboration with Luis Garciga called Against All the Walls. It examines conflicts between couples and the objects used in violent acts—not to hurt someone but to channel anger by breaking them. These practices, of course, are not limited to Cuba but vary according to context and culture.

PRICE  You’re interested in the proximity between domesticity and violence.

CASTRO  Very much so. After my experience in Miami, and precisely because of the distance that it afforded, I started looking at things closer at hand, moving away from the street and towards my own family, towards psychology. Certain questions interest me. For instance: What is war? Why do people fight? I’m seeing where I can go with certain sounds, visuals. I’m working more with fiction now, I’m less interested in capturing the immediate truth.