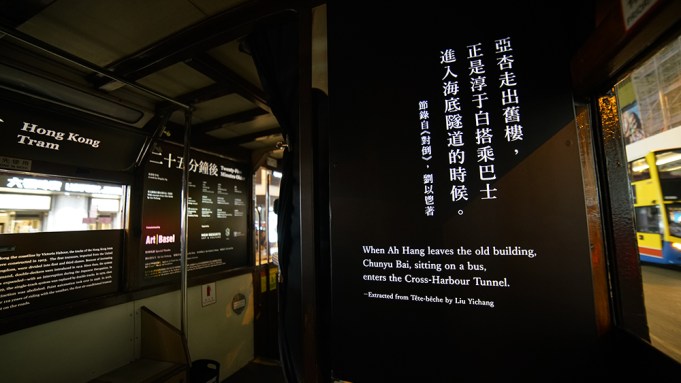 Kingsley Ng is a Hong Kong artist by way of the West. In 1994, at fourteen, he moved from his home city to Toronto, where he concentrated on computer science and fine arts in high school. He then went on to earn a BFA in new media at the city’s Ryerson University, a two-year diploma of post-graduate study at Le Fresnoy—Studio National des Arts Contemporains, in Tourcoing, France, an MS in sustainable design from the University of Edinburgh, Scotland, and a certificate in experience design from Central Saint Martins, London. In 2006, the artist returned to Hong Kong. He now teaches at Hong Kong Baptist University, while showing regularly with Hong Kong’s Osage Gallery and at numerous venues abroad.

Ng’s projects typically combine elements of technology, social interaction, site-specificity, and history. Commemorating the textile industry that once dominated northern France, Musical Loom (2005) features an eighteenth-century Jacquard loom converted into a harplike light-and-sound instrument. In Record: Light from +22 16’ 14” +114 08’ 48”, flashes from tourist cameras on Victoria Peak, a popular scenic outlook in Hong Kong, are etched into a gramophone record and reproduced as music and light effects composed by the artist. The ten-channel video installation Galaxy Express (2013) imagines a train trip into the distant future. Film clips by two collaborators (Robert Cahen and John Conomos) are projected onto a nearly one-hundred-foot-long oscillating string in Etudes for the 21st Century (2013), gradually disappearing as the string returns to stasis.

From March 20 to 28, under the aegis of Art Basel Hong Kong, Ng presented Twenty-Five Minutes Older, in which a Hong Kong trolley, converted into a two-aperture camera obscura, offered passengers opposing upside-down projections of the passing scene, accompanied, via headphones, by an audio track of selections from Liu Yichang’s 1972 stream-of-consciousness novella Tête bêche. (The book’s title refers to two stamps printed inversely head to head.) Tram riders could choose to hear about either one of the story’s dual protagonists: a middle-aged man, displaced in modern Hong Kong, who (like the author) remembers the Japanese invasion of his native Shanghai, or a stylish young woman, enamored of her own beauty, who sees no reason why she should not be a pop singer or movie star. The project’s title alludes to Latvian filmmaker Herz Frank’s Ten Minutes Older (1978), a short that records children’s faces as they watch a movie.

RICHARD VINE  How has returning to Hong Kong affected your work and your career?

KINGSLEY NG  Hong Kong is a place somewhat apart—not exactly in the global art world mainstream, yet certainly an international city with an active culture and a cosmopolitan attitude—and that duality suits my practice well. When I was studying in Canada, I felt I had a better viewing angle on the United States than if I lived there. It’s good to keep a critical distance from the market and art-world trends, while still having an active awareness of what’s going on. I don’t identify myself as a citizen of one place. Right now, I live in the New Territories, near the border with mainland China. I can work freely in Hong Kong, without external dictates, but without feeling lost in obscurity either.

VINE  Is there a difference in the way your work is received here versus in the West?

NG  The reception is slightly better, or at least quicker, in Asia—probably because the underlying themes and structures are more familiar. People here tend to have an ingrained understanding of negative space, of the interplay of dualities, the flow of energy through a person, a room, a building, a city, or a landscape. Chinese painting, for example, often makes use of emptiness that invites the viewer’s mind to fill in or extrapolate. When you see a mountain, you think about the mountain behind the mountain. And a classic scroll painting is as much about time as it is about the trees and waterfalls and rivers it depicts. Traditionally, two friends—a host and a guest—sit side by side and view successive passages of the long unfurling composition. They proceed at a varying pace, sometimes pausing, sometimes pressing ahead, as though on a journey together.

VINE  But there’s an important difference with Twenty-Five Minutes Older because viewers are carried along by a mechanical conveyance, a tram.

NG  Yes, you’re in a capsule, and the projected images depend on the traffic and the hundreds of people on the sidewalks. That’s contemporary life. It’s a different sort of interaction. Multiple, always changing, never at rest—not the old, slow rhythms of the land. Yet you’re one isolated being among many, seeing the city projected upside down and backwards on your fellow passengers. You go forward and backward at once. Through your headset, you hear fragments of only one of the two narrative threads—bits of half the story at best. If you ride the tram on a sunny day, you get sharp, clear inverted images. On a cloudy day, a moody wash of forms. At night, an abstract play of colored lights and darkness. You are, at the end of the tram ride, literally twenty-five minutes older, in both actual and vicarious experience. You don’t take the journey; the journey takes you.

VINE  Many of your works include elements of implied or fragmented or inchoate narrative. Why do you prefer this cat-and-mouse technique to simply telling a story straight, from beginning to end?

NG  Because then it would be one story, imposed by me, with little or no room for audience members to make the tale truly their own. I don’t want to program an experience for others. I want to set up conditions that induce each participant to enter into the co-creation of the work, to complete it over time, by drawing on their own responses to the situation, their own associations, their own dreams. If we’re told what to feel, what to think, we develop no independent psychic resources. The goal, as John Berger says in Bento’s Sketchbook, is not to be “performers” but rather “survivors.”

VINE  In To the Moon (2014), you worked primarily with children, realizing their “city plans” in an outdoor installation. How was that different from addressing adults in your other projects?

NG  I found that the difference between individual children is as great as the difference between children and adults as groups. We tend to over-generalize about others: children, old people, workers, villagers, the rich. But when you actually engage with individuals, those generalities quickly dissolve. In 2009, when I went to the village of Echigo-Tsumari in Japan, I noticed a similarity between the cracks in the earthquake-damaged houses and the lines in working hands of the elderly residents who have now been left behind by their urbanized children and grandchildren. For each home, I made a wind chime in a pattern corresponding to those particular wall-and-hand cracks. Their recurrent tones are meant to recall both the collective and the personal, the fleeting and the eternal.

VINE  One of the most striking aspects of your work is the way it combines current technology with timeless human concerns. How do you view that relationship?

NG  In a sense, I’m using technology against itself, in order to create a space for more contemplative engagement. I try to distract people from distraction, so to speak. It’s difficult to slow down today, to be centered enough to be non-confrontational. All my projects are about how to conceptualize, how to react, how to attune yourself to the world and the moment. Obviously, I’m influenced by relational aesthetics, but my aim is to move beyond social interaction and conceptual art to a deeper cultural and individual psychology, to one’s essential way of being in the world. The Chinese character for “art” originated in a pictogram for planting a seed. My grandfather always spoke of “the art of driving a car,” “the art of buying proper food,” “the art of dressing correctly.” Accomplishments of this sort are a lifelong endeavor, both in the everyday realm and on the highest aesthetic level. The whole purpose of art, I believe, is learning how to be a human being.