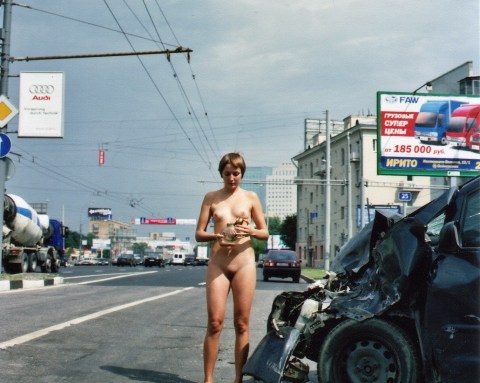 It’s 6 AM in Caracas, Venezuela. 1200 police and military are stationed in key locations around the perimeter of a designated area. Something highly complex yet profoundly simple is being staged. This is a race against the elements, as the sun in its full expression makes successfully photographing the scene impossible. Spencer Tunick, a 42-year-old New York-based artist, has a team of assistants and several cameras ready to shoot. Over a thousand people have gathered, ready to disrobe and pose according to Tunick’s direction. The resulting photographs portray enormous groupings of unclothed human figures in repetitive poses, sitting, standing or lying adjacent to one another in a city street or spread over large areas of a landscape.

In September 2009, Tunick participates in the Moscow Biennale of Contemporary Art, with an ambitious series of singular nude portraits that seem to break from his large group projects. In actuality some of these singular nudes were photographed on the off days during travel relating to the production of his group works. In the Tunick photo Moscow, Russia (Kutuzovsky Avenue), 2009, a singular nude male is sensually sprawled out on the flowers growing on the divider between two Moscow streets. The image of reclining nude is in contrast to the industrial environment of Moscow, which Tunick describes as dangerous and uncertain. (LEFT: MOSCOW, RUSSIA (ZUBOVSKY BOULEVARD), 2009. COURTESY OF THE ARTIST AND MOSCOW BIENNIAL).

NOAH BECKER: What is your project for the Moscow Biennial about?

SPENCER TUNICK: I was commissioned to travel to Russia to work with individual people photographing them without clothing on the streets of Moscow. Curator Mattijs Visser enjoyed my single portrait series, so he said, “Why don’t you show forty smaller works and make ten specifically for Moscow?”

NB: How will the works be installed at the Biennial?

ST: This has not been fully decided yet. They are being mounted here in New York then framed in Moscow. They are 24 x 29 inches. People like to get real close to the individual works. The Biennale curator Jean-Hubert Martin says that he is more interested in breaking from the line and mixing them in a grid. With this body of work I always like to give the entity or person hanging the work a lot of freedom. This might even assist in creating a new narrative for how works fit together. At the Biennale they will be displayed at Dasha Zhukova’s Garage Center for Contemporary Culture.

NB: Does an audience ever gather when you are taking photos and watch the performance aspect of your process?

ST: It would be very hard for me to work with an audience. I’m a little bit shy working in front of an audience that’s clothed, believe it or not (LAUGHS). It’s easier now to have the city clear the streets of onlookers, but I’m ok with the museum directors who commissioned the work and the curators to watch as the only audience.

NB: How do you prepare for a shoot?

ST: I arrive a few days before the execution of the work. Then I do a day of press to gain momentum for the installation. Then I continue to gather people through the website where people sign up to pose, even right up until the morning of. My work usually happens on a Sunday. On Saturday what I stay in the hotel room most of the day. I don’t go out with the crew at night for dinner, I just try to clear my head and relax. The bombardment of people and ideas that come the next day is overwhelming, so I really need to chill the night before. Then the morning of an installation, I usually wake up at two or three in the morning and write the words “CALM-FOCUS-TIGHT” on the back-side of my left hand. This gets me in the right mindset for the installations.

NB: Do you know how many people will show up?

ST: Yes, it’s usually half the people who sign up to participate who show up. This number has been pretty consistent over the past seven years.

NB: Why did you move towards the singular nude in this series, after working with the large group nudes of your other photographs?

ST: I’ve been consistently working on the individual series since 1992. I’ve continued with that series even as I’ve moved into large installations. After a group project, I take time off to work on individual portraits.

NB: People have compared your work to Vanessa Beecroft. Is this a relevant comparison?

ST: I started making these group works in 1994; I believe two years later Vanessa started adding nudes into her groups. This made me happy that I wasn’t out there doing this alone. There was a language that was being developed now by another artist. It was very good to have company, but I feel that our work is very different. Vanessa’s work is more performance and mine is more installation. Also I feel that her work is endurance oriented; often the models need to stand until they get tired. And her work is very much about the male gaze and gender. I really enjoy her live performances more than her photographic documentation. And I enjoy her videos more than the photographs.

NB: Weather conditions would be a factor in your having a successful shoot. Has the end product of a group installation ever been unusable after a massive organizational effort, or do you get the shot each time without difficulty?

ST: Recently in Ireland we [Tunick and two thousand, five hundred people] came upon a storm that was heading into the bay. The weather became insane and cold. The plan was for 2500 people to go in six-inch-deep water in the bay. The storm was coming in fast and it was freezing and actually two thousand people left after the first set up. 500 people stayed on for the other installation set-ups that morning.

NB: How do questions of a politicized body circulate in your work?

ST: The questions are often legal issues, in some countries they are moral issues. In Chile I had four hundred protesters outside my hotel room shouting “Tunick Immoral.” The US laws against the body in public were put into place recently, during the 1970s and 80s, as a reaction to the growing pornography industry. Many laws don’t reflect free speech and in many states the nude body in art, in public, is considered a criminal thing closely tied to pornography laws. When I get a permit to do my work, it often goes against a written law. By creating this window into the legal system other artists can challenge the system and use my work as precedent.

NB: What is specific to the series about Russia?

ST: It’s more about danger in Moscow, about uncertainty on the streets. There is something that you can’t anticipate about the Russian public that is very interesting to me. Moscow has a rawness that reminds me of a dustier version of Tokyo with lots of billboards on the street, and lots of traffic so there are often cars passing in the background of the works. There’s a lot of energy there and the youth rule the future, most of the people who posed for me were in their twenties. No one signed up to pose in their thirties, forties, or fifties. We sent a press release out through the Biennale looking for everyday people as opposed to models.

NB: So then a certain amount of self-censorship is still imposed? But gender is not specific then?

ST: No, neither is shape or size.

NB: How sexualized are the bodies you present in your work?

ST: My recent pictures are far more eroticized. Like covering seventy-nine men in white chocolate in Brugge, or at the Sagamore Hotel in Miami, where I had five hundred people on the balcony hold Champagne bottles, bursting them all at once. But the actual event of making the work is often the least sexual part of the process.

ST: The project that I did working with a nude in each US state is called “Naked States.” It turned out not to feel very “nude” it felt very “naked” because I felt very much up against the laws. This project felt very stark and challenging. “Naked” is more aggressive and “nude” is simply more accepting.

NB: What is the largest number of people you have photographed nude at one time?

ST:  Eighteen thousand in Mexico City, two thousand of which could not get into the area. They were there but we had a cutoff because the sun was rising so fast over the federal government building that technology and nature took over. I couldn’t really shoot into the sun because of massive flare on my cameras. So we had to cut the extra two thousand people off time wise. So it really could have been twenty thousand people in that photograph.