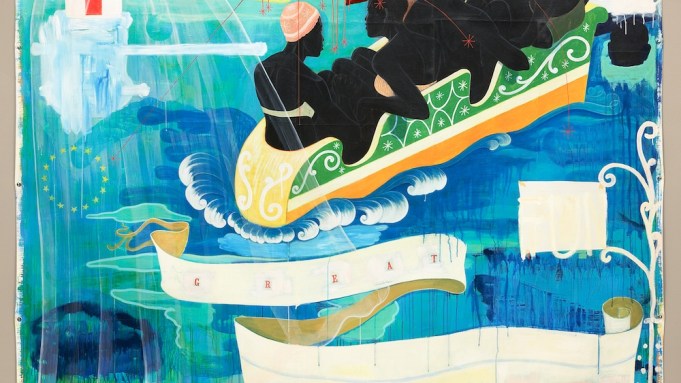 The painter Kerry James Marshall is known for taking on American history from a black perspective. A significant sampling of his work is on view in Washington, D.C., at the National Gallery of Art’s first-ever solo show of a living black artist. “In the Tower: Kerry James Marshall” (through Dec. 8) is built around his painting Great America (1994), which re-imagines the journey of slave ships from West Africa to North America as an amusement park’s haunted-tunnel ride. This 2011 acquisition, along with 9 other paintings and 23 drawings on view in the show, questions orthodox accounts of U.S. history while exploring African-American experience.

The Birmingham, Ala.-born, Chicago-based artist, 57, spoke with A.i.A. by phone this week about the National Gallery exhibition, the various U.S. histories and American dreams, and why he’s committed to the emphatically black figure.

TRACY ZWICK What does it mean for you, an artist whose work is not always celebratory of American ideals, to have a solo show at the National Gallery of Art?

KERRY JAMES MARSHALL The National Gallery is the place that means to represent everything that’s good and important in art and show what it believes everyone who is a citizen should recognize and engage. My dream was always to be in museums. It’s a big and important milestone and a fulfillment of one of my primary ambitions.

We tend to assume there is one history of America: the mythical, heroic narrative of an all-inclusive, grand project that had at its inception the goal of embracing differences and treating all as equal. If we allow ourselves to be lost in this mythology, we overlook the more disturbing, less humane dimensions of our history. We don’t always learn that our nation’s triumphs were at times achieved on the backs of other people. Everyone should have both of these complicated narratives always in their consciousness.

ZWICK This exhibition coincides with the 50th anniversary of the March on Washington for Jobs and Freedom, at which Martin Luther King Jr. spoke of an obligation to push for the full expression of one’s rights even if it makes people uncomfortable. Does that admonition resonate with you?

MARSHALL For me, the picture is a catalyst; it will make people uncomfortable. But it has to become commonplace for people to see images like mine when they go to museums or turn on the television. If it’s the exception to see images like that, then there’s no way you can get past the notion that there is something fundamentally wrong with being that dark-skinned.

ZWICK Bang [1994], an acrylic and collage work on canvas, is part of this exhibition and is on loan from the Progressive Insurance Corporation. It features deeply black-skinned children saluting the American flag in a utopian 1960s-era suburban landscape, but is darkened by a halo of black smoke surrounding a charcoal grill and sinister drips from the phrase “Happy July 4 Bang.” When it was installed at Progressive’s Cleveland headquarters, it made some employees sufficiently uneasy that the company brought you to Cleveland to address the problem. What happened?

MARSHALL We had a conversation in front of all the employees, and opinions were divided. Some employees loved it and others were never going to get past the darkness of those figures. Some black employees said, “White employees call us names because that picture is up there.”

People ask me why my figures have to be so black. There are a lot of reasons. First, the blackness is a rhetorical device. When we talk about ourselves as a people and as a culture, we talk about black history, black culture, black music. That’s the rhetorical position we occupy. Somebody has to start representing that blackness in the extreme and letting it be beautiful.

ZWICK You create paintings that are captivating on their own terms and also readable for their myriad meanings. Walter Benjamin, in his 1936 essay “The Storyteller,” considered the incommunicability of certain experiences, and the  contribution a storyteller makes by imbuing narrative with “an amplitude that [mere] information lacks.” Are you telling stories?

MARSHALL Exactly! And these stories in my paintings are connected to larger stories. It’s more important to tell the story of a people by seeing myself as part of a people rather than an individual.

ZWICK You’ve called your technique “amalgamation.” What does that mean?

MARSHALL It’s the use and unification of various styles in the service of narrative.  It’s a way in which the identity of each of the parts remains clear, and it’s the only kind of grand history painting I can make. I admire Géricault and Goya, but I also borrow from Haitian religious traditions. When I started using glitter, it had a lot to do with the fact that I was really impressed with and collected a lot of Haitian Veve flags, which are used in voodoo ceremonies.

ZWICK Speaking of vernacular traditions, a recent New Yorker article on the artist Thornton Dial and the collector Bill Arnett discussed so-called “outsider” or “vernacular” art made by black Southerners. Do you feel a connection to these artists?

MARSHALL This goes to a fundamental problem in the relationship between black folks and white folks in the U.S.—it has to do with who is in charge. Who has the capacity to create institutions and/or to create markets for work? People like Dial and other vernacular artists working outside of the established art world are driven by inner impulses to make stuff. But that work typically has to be brought to market by a white dealer or white investors, and it is often purchased by a white clientele. Major museums in the U.S. have generally not been directed by a person who is not white. And with the prices people are paying for art today, it’s very far outside the realm of consideration for most black people. It’s not part of the cultural foundation they came out of and operate in.

There was an exhibition called “Black Folk Art in America” in the 1980s; it was the first time I saw work by Bill Traylor. I was captivated by it. There’s a way in which, for me and other artists I know, we look at vernacular work as a way of trying to get to something that supports the idea of a black aesthetic. Is there something more genuine, authentic or true about the work these artists produce? A lot of us looked at work like Traylor’s as some evidence of a way of treating the figure, the black figure, so you’d get some of that honesty and authenticity. My approach gets blended with more critical approaches, more formal approaches, but there’s an undercurrent of desire to be connected to something that other black people made that you can begin to claim as a kind of aesthetic patrimony.

ZWICK Finally, let’s talk about the many drawings in this show. Is drawing central to your practice? Do you use drawings as preliminary studies, or to chart the development of your paintings and your thinking?

MARSHALL The drawings are preliminary to a larger project. They do evidence my thinking and on some level they demonstrate that making a painting is an intellectual activity. Paintings don’t just happen. I am not a proponent of the idea of an artist as someone who kind of magically makes things and has no real control or isn’t willfully producing a certain kind of thing. It is labor-intensive and it is research-intensive. You are making one decision after another, trying to get at something you think is important. I don’t often show drawings, but it’s important to know how things came to be as they are. That’s what I’m interested in.