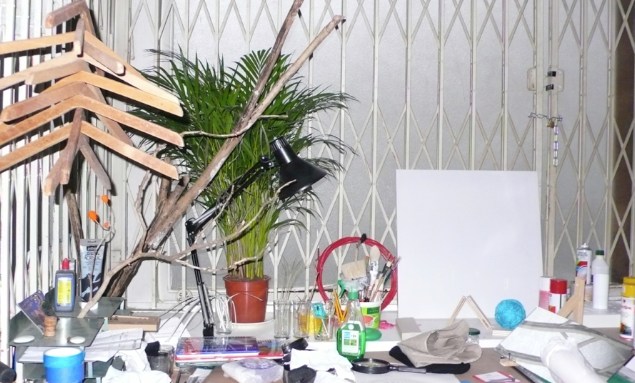 Currently artist in residence at La Galerie, Noisy-le-Sec, French artist Davide Balula welcomed me to his studio in the Parisian banlieue on a snowy day in mid-January. Completing a nine-month residency at the public art space run by Director Marianne Lanavère, he is in the process of preparing work for group shows at La Galerie and Thaddeus Ropac (opens February 13), and a solo show at Frank Elbaz (opens February 27).

“A studio practice is really a very recent thing for me—before it was just the computer and the telephone,” explained Balula, who moved into his first studio in November 2008 as an artist in residence with Lower Manhattan Cultural Council in New York City. “I’m still doing the same type of work… it’s just the attitude that may have changed.” We first spoke about his work Endless Pace (Variation for 60 Dancers) (2009), which was included in the PERFORMA 09 program. Since his laptop has been relegated to the kitchen, we watched a bird’s-eye-view recording of the event on the artist’s iPhone.

“Work in two dimensions has always made me uncomfortable,” said Balula as he introduced the work in his street level studio. “I’ve always worked with sculpture, but I recently had the desire to develop a graphic practice—while keeping the idea of things that change with time.” Describing painting as a “trace of action,” this past year he has been working on a series of two-dimensional compositions on cardboard and wood: an archive of gestures—random scratches, splattered paint, pieces of colored tape—made during the realization of other works. While reflecting the artist’s actions over time, as well as the real volume of the cardboard surface and the depth incurred by inscription, he considers works like Cardboard Painting from the Watercolor Pencil Series (2010) autonomous, and plans to show them as paintings.

Addressing the painterly representation of landscape, he has also begun another series in two dimensions: images of riverbeds, including those of the East River and the Seine, made by throwing a large piece of canvas, filled with pebbles and tied with a rope, into the waterways. After leaving the canvas submerged for about two hours, he pulls it back to shore, creating a visual record in water stains, algae and mud. Expanses of untreated canvas, the final works, East River Painting (2009), La Seine Painting (2010), and Douro Painting (2010), feature green or black smudges (depending on the health of the river), accumulations of silt and the occasional leaf of an underwater plant—poetic compositions shaped by Balula’s plunge into the natural environment.

Above the stairway, a new monochromatic work, Burnt Painting #2 (2009) made from six even planks of dark charred wood aligned in a neatly framed rectangle recalls Balula’s ongoing concern with temperature, and materials that change over time. He mentioned Alberto Burri and Lucio Fontana—recalling the latter’s assault on the monochromatic picture plane—as references in the creation of the carbonized surface. Nearby, on a white wooden board Balula found in the basement of La Galerie, he has cultivated an expanse of mold (Mildew Painting, 2009). With the help of a humidifier, he has encouraged the growth of a wide swathe of black spores. I suggested the English word “corral” as a way to describe his treatment of material in each of these works. Engaging with fire, mold, riverbeds and the traces of actions gone “wild” in his studio, Balula is like a ranch-hand herding cattle, maintaining their safe transference and containment. Working with deliberate, arbitrary constraints, he opens his constructions to nature and chance. Balula agreed with my assessment, and tapped the piece of cowboy vocabulary into his phone.

The last series of works Balula showed me were drawings made by sharpening a pencil above a textured sheet of paper in the rain. Cobalt Green, for example, from the series Watercolor Pencil Sharpened Under The Rain (2009), looks like the trace of a small explosion. Blue green pencil shavings and a powdery dust bloom across the page, melting into the paper towards the edges with the flow of the rain. Referencing Marcel

Broodthaers’ film La Pluie (Project pour un Texte) (1969), in which the artist writes in the rain only to see his words vanish with the falling drops, Balula taps into the poetry of futile action while successfully creating an enduring image. He gave a number of the works from this series to his family for Christmas presents—”the best ones of course,” he laughed. Looking outside we decided it might be a good idea to try making a few more drawings in the snow.