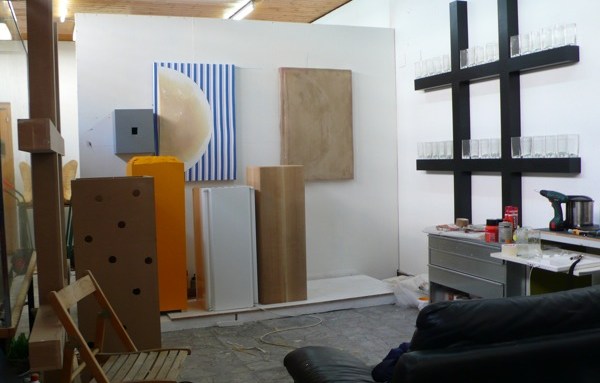 The studio of Emil Michael Klein occupies a room next to the cold, empty lobby of an enormous ’70s-era apartment block building. The building, in the Kleinhüningen neighborhood of Basel and blocks from the Rhine, was designed by Swiss architect Hans Zwimpfer, who’s recently known for modular, modernist stacks of suburbans houses. All in all it’s an incongruous setting for Klein’s workspace, with its low ceilings, warm wood paneling and tiled faux-marble floors. The space doubles as the artist-run gallery Galen, which Klein and artist Kaspar Müller inaugurated earlier this year with a work by Swiss artist Andreas Zybach that entailed crushing tons of random materials—carrots, bricks, camera, barrels, and so forth—to a colored powder, which was then sprinkled about the space.

At present, the studio-cum-gallery is packed with Klein’s recent works: pedestal-like forms drilled with perfect holes, painted an egg-yolk yellow, expertly crafted from oak wood, or tricked out with bright white fluorescent tubing; a stack of huge double-cross grids in black or gold leaning against the wall; and cardboard boxes filled with identical glass vases. The works are to be shipped to Berlin tomorrow for the artist’s first solo show at Galerie Luis Campaña, and the artist steps nimbly, if a bit nervously, around the art and packing materials to invite me into the crowded space.

Klein picks up one of the heavy, square glass vases, which he recently made with a local glassblower. The vases, which resemble outsize scotch glasses, will be exhibited atop one of the cross-bars of his wooden grid-like works, he tells me, and he lines a few up so that I can get a sense. The black artwork leaning against the white wall, stacked with glasses, evokes nothing so much as a Mondrian grid writ large, then helpfully transformed into a bar: the Minimalist design idiom and the art party become one. That the glasses themselves are gorgeous, practical, and yet decisively elusive in function is indicative of Klein’s larger body of work, which conflates an interest in craft and design with a formal vocabulary grounded in Modernist geometric abstraction and Minimalism. Klein’s pedestal-like works are variations on a theme, in which the artist has taken the standard museological form and investigated its various formal possibilities. If Klein’s formal constraints (the pedestals are not dimensionally uniform) do not go so far as Donald Judd’s seminal 100 untitled boxes, they take a similar craftman’s delight in plumbing the myriad formal possibilities of a mundanely familiar object. In the studio, these works stand along one studio wall like a police line-up. (LEFT: INSTALLATION VIEW. COURTESY GALLERY LUIS CAMPANA)

Born in Munich in 1982, Klein grew up in a small alpine town in the south of Switzerland. “When I was 16,” he says, “I moved to Brienz to attend a school for woodcarving-the Schule für Holzbildhauerei Brienz.” Brienz is the celebrated center of traditional craft in Switzerland; nevertheless, upon graduating, Klein left for Basel to enroll in the art academy here. Still, his interest in craft lingers. His exhibition in Spring 2008 at the Museum für Gegenwartskunst, Basel, featured hand-carved frames and a free-standing wooden wall that divided the exhibition space. The handmade objects contrasted the color-soaked geometric forms of Klein’s drawings and paintings—which in their edited, casual decisiveness can recall the work of Blinky Palermo and Heimo Zobernig, even as they proved prescient of his more sculptural body of work to come.

Back in his studio, Klein points to a new series of three blue-and-white striped acrylic-on-cotton paintings, each of which features an area of built-up paint that rounds off the canvas like an egg sunny-side up. The blue-and-white cotton, he tells me, was woven by a traditional local weaver, per his design. Both painting and object, the wide vertical stripes, which conjure a bathing towel, and the egg-like forms affixed to them, are chilly and inscrutable. A fourth work of the exact same size completes the series, but leaves off the cloth and acrylic; in its stead is a nearly flesh-colored polyester relief of one of the previous works-the shape protruding from its surface like a rolling hill, or the hood of a car. A corporeal presence is conjured by its fleshy, resin-like material, and it evokes simultaneously Eve Hesse’s bodily configurations of Minimalism and Richard Prince’s use of brash and brooding car hoods to conflate painterly concerns with sculptural materials. (LEFT: INSTALLATION VIEW. COURTESY GALLERY LUIS CAMPANA)

In the new body of work spread out over Klein’s studio, material is key. Though the artist often reprises familiar forms-the grid, say, or the vase-and common materials, he configures them at a subtle slant. If his aim is not revelatory transformation, nor, he tells me, is he precious about staying “true” to his materials; they are simply there to perform their function, whatever that may be. His sometime studio mate Kaspar Müller speaks of Klein’s “radical formal self-reliance,” from his early graffiti to his current art work. “The smooth, soft swing in his works was always there, very light and not at all caught in the codex of style schools,” he has said admiring. Of Klein’s studio practice, Müller says: “He’s a great craftsman when he works, he makes quite a mess, cuts his fingers and so on. The process brings out new forms, and its funny, very comedic, loose, but all in a very serious way.”

As I moved about Klein’s studio, examining the various art works, their tension derived from the artist’s intuitive approach to a formal vocabulary that is ostensibly rigid and objective: a kind of loose, wandering geometric abstraction. As our talk moved again to the Berlin exhibition at Luis Campaña, Klein put a hand on one of the gold wooden grids, which he said he would hang on top of one of the black ones, but slightly off-of-center, for his show. As he moved them around to show me, the double-grid, with its bright gold and dull black squares, was a study in ever-evocative geometric forms and shimmering contrasts. Cool, hard-edged abstraction become spatial and seductive both. (LEFT: INSTALLATION VIEW. COURTESY GALLERY LUIS CAMPANA)

Work by Emil Michael Klein is on view through November 14. Campaña Berlin is located at Axel-Springer-Str. 43.