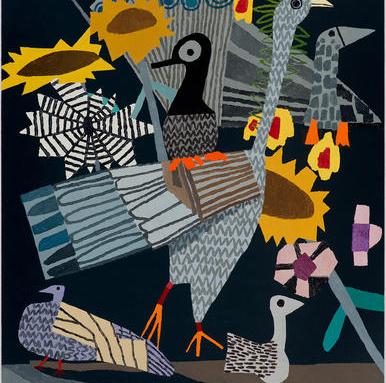 It might not have gotten him to Carnegie Hall, but practice has landed the Los Angeles-based artist Jonas Wood two concurrent solo exhibitions in New York. In his new works at both shows, Wood explores a variety of old and new motifs.

An array of domestic interiors, landscapes and sports scenes are on view at Chelsea’s Anton Kern Gallery (through Oct. 19). His large-scale, oil-and-acrylic works construct complex forms and perspectives using simple shapes and flat color, combining modernist abstraction with realistic figuration. Meanwhile, in Midtown, he has clad the Lever House lobby with basketball-print wallpaper and hung 10 Clippings, large still-life paintings of plants excerpted from his own previous works (through Jan. 4).

EMILY LEISZ CARR How did you conceptualize and produce two such different shows at the same time?

JONAS WOOD For the Lever House, I was already making wallpaper and I started to make plant clippings. I wanted to put these two things together officially. I was intrigued by the colors and how it looked together. It’s kind of just a demonstration of color.

For the gallery show, there was no narrative visual idea. It was just my favorite paintings I was working on at the time, hung together as best I can hang them together. That’s always been my tradition. I rarely make a show like at the Lever House.

CARR Is your resistance to an overall exhibition concept the reason your shows don’t have titles?

WOOD I would be being dishonest if I were labeling these things a certain way, with an overarching theme. I almost wish I could think of something snappy, but it feels more honest to not. I’m just getting started. There’s plenty of time to put things together differently, to categorize things and to have my visual language accumulate.

CARR You grew up in Boston. Are you a Boston sports fan? How does that go over in L.A.?

WOOD I follow the local sport wherever I live. I love Boston sports, Red Sox, Patriots, Celtics, but I don’t hate any other teams. I went to a Dodgers game last night. The sports thing is funny. A lot of people think my work on the subject is based on being a super sports fan, because I’m from Boston or because I make these nostalgic pictures, but really the whole sports theme is just a vehicle for practicing portraiture.

CARR You’ve described your paintings as your “work,” but you also use photographs and drawings, moving an image through different mediums before you arrive at a painting.

WOOD My Old Bedroom Shelf is a good example of that. My assistant sent me a picture of the shelf when he stayed at my dad’s house, then I made an etching, then a painting. Sometimes it goes from photo right into painting. The big landscape, Schindler Apts, has no drawing whatsoever. Heads Up, the poker scene, has a drawing that looks almost exactly like the painting. It’s about half and half now. It’s good practice for it not to be the same way all the time.

CARR Do you see the other stages as merely preparatory?

WOOD I think the more accurate way to describe it is that drawing is a facilitator for me to make a painting. Most of the time I’m trying to get my paintings to catch up with my drawings. It’s a struggle trying to make the painting the best thing.

CARR You also quote yourself from one painting to another, like in Clippings.

Clippings is an example, but kind of in reverse. I’ve cut something out and isolated it, as opposed to cutting it up and pasting it all together.

CARR You’ve recently added etching to your repertoire. Can you talk about that?

It first happened in Heads Up. I started etching and I started making that painting at the same time, 10 or 11 months ago. That yellow grid of dots that kind of floats above the players? It became this one-for-one idea about the mark-making of etching and the mark-making that can exist in painting and how much weight it’s carrying. That yellow grid is carrying all the weight of the world in that painting somehow.