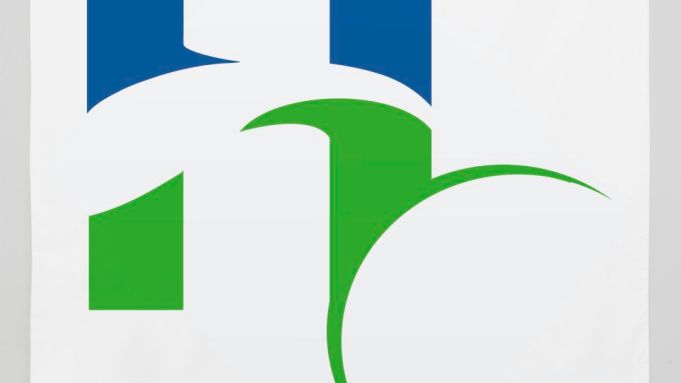 Superflex’s Copy Light/Factory (2008) is currently included in MoMA’s exhibition “Print/Out.” In this room-sized installation, audience members are invited to make mock-ups of trademarked lamps by photocopying four photographs (one for each side) of one of a suite of well-known lamp designs and affixing these copies to wooden cubes encasing a light bulb. These creations are hung in the installation, which grows as viewers add printouts.

A.i.A. sat down recently with Christiansen to speak about these and other projects.

SUPERFLEX The series is a portrait of the outcome of the financial crisis since 2008. In the gallery are approximately 20 large-scale banners with the logos of banks that were bankrupted or bought out due to the mortgage lending machine’s collapse, problematic investment structures and so on. They are randomly picked, and they are both U.S. and European banks. They were painted by a sign-maker that we’ve worked with for many years. So they’re hand-painted, but they also look like corporate identities.

WEIST What is the role of art in responding to crisis?

SUPERFLEX Our belief is that we, as artists, not only reflect but we also propose. We criticize. But most of all I see artists as those who are funded to have a view on how society is functioning or structured. If a viewer is walking in the street and sees an advertisement, she might not notice it. But if she chooses to enter an art context, it’s because she has opened up: she’s ready for an input that may influence her thinking, or may give her a new view on how things work, or how society works. I believe that as artists we have a responsibility to watch society and challenge viewers, because we have their attention.

WEIST You describe your projects as “tools.” Why use the unusual nomenclature?

SUPERFLEX We didn’t only want to call what we did projects or artworks, because many of our works challenged how people in a gallery space exhibited or could view them. As an artist you propose something, and in calling your works “tools,” you invite viewers to use your proposals. You can use an object as a sculpture, but also you can also smash a window with it, or break into a bank. It invites participation, and also criticality.

WEIST How have you negotiated the tension between pragmatism and esthetics?

SUPERFLEX At an early stage we tried to play with it a lot. At first we decided to use only three colors (orange, black and white) and specific fonts. It was quite playful but also turned out to be quite interesting, because we were focused on content rather than form. Later on your work evolves and it becomes boring to limit yourself, then you open again and focus on the situations and the activities. But esthetic choices also depend very much on what one would like to achieve, what one would like to talk about. That’s why we like to use any medium we find relevant. It could be film or sculpture, or in this case it’s painting, because that’s the best way of representing what we would like to focus on in “Bankrupt Banks.”

We are registered as a company, but that’s a formal distinction. When we started in 1993, it wasn’t just a formality: it was a statement of political consciousness, who we were as artists, and so on. We look at and confront market structures, and thereby often playfully engage with other companies. We all know that when an artist approaches a company about a project, they assume the firm has to fundraise for the artist. Being a company, we can negotiate on equal terms.

We’ve also developed, for example, something called a Supergas, a biogas for rural areas in Africa. We’ve worked with engineers, scientists and so on for 15 years. We jump in and out of many roles. That’s the beauty of being a group: we can work on more levels. Let’s take our soda as an example. It can be in a gallery, but also in a 7-Eleven.

WEIST So when the soda is in a 7-Eleven, is it as an artwork? An object? A product?

SUPERFLEX We are three artists who work in the context of art primarily, but we can decide to put work in another context, like in 7-Eleven. Sometimes a person will know the soda comes from an artist and will look at it as that, as related to an artist. And others will just want to consume it; others see it as an economic idea. For us it’s interesting that you can work on all these levels at the same time.

WEIST The “Bankrupt Banks” banners will be shown at the Armory Show, where some of the current or former CEOs of the banks whose logos are depicted will be shopping. What do you think of the idea of the artist or artist group as the indirect beneficiary of the financial system you’re critiquing?

SUPERFLEX That’s a good point. For us, when someone acquires one of our works, they enable us to develop further. When someone pays, it becomes an investment into the way Superflex thinks and works.

WEIST So the objects are the dividends of your practice.

SUPERFLEX I didn’t really think about that but it’s a very good description. Like the banners actually become new banknotes in a way. They become a new value. They are representations of these banks. But the beauty of it from my point of view is also that you can just go and look at them as minimalist paintings. When you don’t know, or don’t remember, or have no frame of reference to the banks, the banners are just paintings—paintings of a strange symbol.

WEIST What about your project at MoMA?

SUPERFLEX The installation at MoMA is called Copy/Light Factory. It’s set up for photocopied images of famous lamps to be glued onto wooden cubes and then hung. So the space at MoMA starts out dark and then is gradually illuminated with these lamps.

Many people have participated. You could just go, look and understand, but three days a week you can participate and become part of the production. Each time someone photocopies a famous lamp, it is a confrontation with intellectual property laws. So the audience members become participants in a machine that produces problems.

WEIST Your last big project in New York was the JPMorgan Chase toilet, which was also highly participatory.

SUPERFLEX Power Toilet JPMorgan Chase (2011) was presented by Creative Time on the Lower East Side of Manhattan last fall. It was an exact copy of the JPMorgan Chase executive’s toilet: a place that is very exclusive, very difficult to get into, related to one of the most powerful institutions in America, in fact. We transferred that structure into another economic context: a Greek diner called the Olympic Restaurant on Delancey Street. So when you go into the diner, although you might expect a somewhat dirty bathroom, you actually find a shiny, beautiful toilet, with paintings on the wall and so forth. People were very astonished, very surprised-and that’s why we’re interested in that project. In a museum, as we said earlier, viewers go in and they’re open to a different view. But in a public space you can really challenge the viewer.

Another important aspect is that the employees are happy because the project has improved their quality of life. The exhibition is permanent. Many people who work in the financial world have also responded to it. The project gave rise to some interesting views on the bailout package. For instance what if instead of giving the banks big bailout plans, we instead had given the equivalent sum of what it cost to produce that toilet—$20,000—to every small entrepreneur in America? What would that have changed?