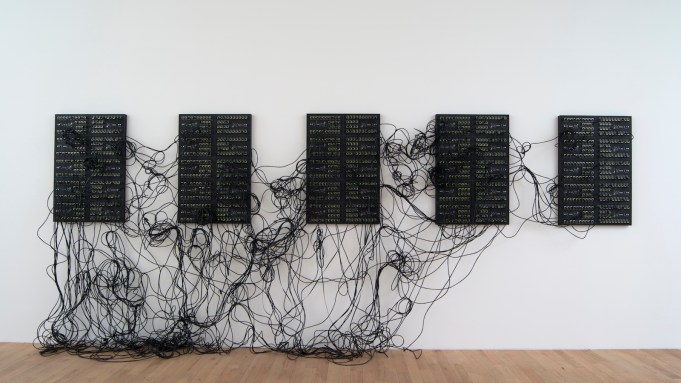 By the time you’re within a block of “Shellshock,” Addie Wagenknecht’s first U.S. solo show, at New York’s bitforms gallery (through Dec. 7), you’ve already contributed to its largest work. In the nearly 16-foot-wide, wall-hung sculpture XXXX.XXX (2014), Wagenknecht has configured packet sniffers-devices that intercept traffic on a network-mounted behind circuit boards that intercept live data from nearby Wi-Fi signals. As data passes through the sculpture, small green lights blink, obscured by tangled Ethernet cables that dangle from the panels. If so-called post-Internet discourse has often engaged with the mythologies of the consumer web and panglossian theories of images in circulation, Wagenknecht deals with a more powerful, ubiquitous architecture. These interventions point to the transition to an information society just as the awareness of digital forms of surveillance has burst into the mainstream.

An American artist based in Vienna, Austria and New York, Wagenknecht, 33, engages the history of participation and the avant-garde with creative manipulations of hardware and software that ensnare audiences in their very design. Trained in computer science at the University of Oregon and interactive telecommunications at New York University, Wagenknecht is a member of Free Art & Technology (F.A.T.) Lab, and was the recipient of a 2014 Warhol Foundation grant, which she used to found Deep Lab, a “collaborative group of researchers, artists, writers, engineers, and cultural producers interested in privacy, surveillance, code, art, social hacking, and anonymity.”

The artist discussed her bitforms show with A.i.A. by e-mail recently, touching on the subjects of digital technology, privacy and control.

MIKE PEPI I am curious about the everyday implications of the process behind the “Data and Dragons” series-a set of interactive “data portraits” mimicking what might be called server aesthetics. In particular XXXX.XXX makes reference to an existence where such intrusion and collection are constantly occurring.

ADDIE WAGENKNECHT The series is really about how society is becoming a byproduct of the network. I wanted to create a notion of the digital body. The work is a system which is porous-it breathes. Concepts of “the figure” and portraiture are changing with the new forms of media which lend themselves to an impulsive, constant output of expression, collaboration and history. XXXX.XXX visually emulates server rooms and forms visual nests which mimic textiles and tapestries. At the same time, it becomes about how phones and technology are becoming anthropomorphic, extensions of our arms, altering the methodologies of expression. Like a “black box” of social currency, we depend on these devices to be seen, to interact and exist, both offline and on.

PEPI Your work brings up an interesting comparison (or fusion) among the porous line between art and activism in dealing with issues of surveillance, authority and “big data.” Can you reflect on how these works intervene as art objects?

WAGENKNECHT Many of these works are about pushing past the fatigue that results from being inundated with images of war, surveillance and terror. They address material-both physical and social.

Much of my work has been informed by being a member of F.A.T. Lab and later on founding Deep Lab, as both focus on hacking methodologies and open-source culture. I look at ways that hacking can be applied to systems and networks outside of technology, most recently in terms of mothering/feminism, consumption and communities.

Centralized systems like Facebook or Twitter are coercing people into a state of being that is seen as interactive and public even though it’s illusive. The very practice of privacy is all about control, to be seen as public, but that rarely equates to being public.

PEPI 1:24 Tank, Black (2014), a remote-controlled model of an M1 Abrams tank, is a traditional symbol of military aggression, but here the Wi-Fi jammer inside is the only real threat. This indicates the drastic expansion of the weapons of war that have become available in recent decades.

WAGENKNECHT Technology has been used as a weapon since its inception. In the 1930s, for example, IBM created technologies that organized nearly everything in Germany and then Nazi Europe, from the identification of the Jews through censuses and ancestral tracing programs to the running of railroads and organizing of concentration camp slave labor. IBM and its German subsidiary custom-designed complex technological solutions, one by one, as needed by the Third Reich. During the Arab spring, lack of Internet freedom was both a cause of the uprisings and suppression of that freedom was a tactic employed by authorities to halt protests.

PEPI How have you experienced different attitudes towards digital labor, privacy and the role of the state in Europe as opposed to the United States?

WAGENKNECHT We are living in an architecture of suppression. Europe has a very real historical awareness of how information can be used against people. There is a sensitivity which doesn’t exist elsewhere in Western societies. And not just because of the Stasi but also the Nazi era. Peoples’ reactions to the Snowden revelations in German-speaking countries were different from what I witnessed from most Americans. There was full-on national outrage when it leaked that German chancellor Merkel’s phone had been tapped. People in Europe generally don’t use credit cards. When I ask, they often say this is because they are another way to track you. I see parallels between contemporary artists’ reactions to privacy and Viennese Actionism, which rejected traditional object-based art, creating instead a more performative action staged in a controlled environment. For example, in BlackHawk, the use of materials such as gunpowder and drones is essentially a translation of the body as a type of canvas, as in XXXX.XXX. The works use their materials in a new way-a living form of painting.

PEPI There is a tension among older photographic surveillance, as in the CCTV cameras in -r-xr-xr-x (2014), and one concerned with metadata (that which provides information about content), as in XXXX.XXX. Is this an implicit theme of the show?

WAGENKNECHT We are entering a new period in which our data has a quantifiable value in a marketplace. Many of the works in “Shellshock” reflect that awareness. We check our social network feeds as a way to validate ourselves. There is a notion of collective intelligence and, at the same time, there is fear in that. As we look at our screens, they look at us. It is a dialogue, even if it’s asymmetrical. It becomes a gaze. In some works, I am critical of this relationship. I want people to feel comfortable in their circumstances of risk and fear, rather than become complicit in the notion of living within a structure which they did not actively build.