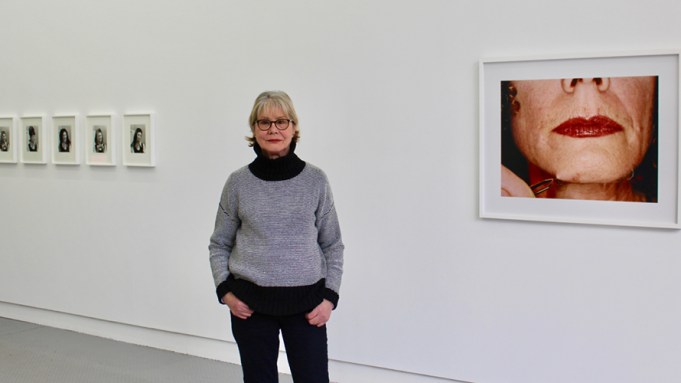 Suzy Lake, who was born in Detroit in 1947 and emigrated to Canada in the late 1960s, works with video and photography to confront feminist issues. Intermingling recent and early works, Lake’s show “Performance of Protest,” on view at Arsenal Contemporary in New York through January 18, emphasizes the persistence of her vision and the continued relevance of the issues she addresses, from ageist beauty standards to physical and emotional abuse. Some of Lake’s photography-based projects—like Imitations of Myself (1973/2013)—were made decades ago, but printed only recently, amid a renewal of feminist activism. Below, Lake talks about what has and hasn’t changed in feminist art and camera technology in the past half century.

Imitations of Myself is the first thing you see when you enter the gallery. It’s a grid of photographs that show me putting on whiteface, which mimes use to reduce a figure’s face, making it so that bodily animation is what brings out the character. Then, I proceed to put makeup on top. The two layers create a mask. I wanted to explore the ways representation is constructed. The first image in the storyboard says GENUINE SIMULATION on it—I’m mimicking myself.

When I made this work, I had just moved to Montreal. I was pretty much an activist in Detroit, doing a lot of civil rights work with women in the projects. We were fighting for change back then, and there was an urgent need to think about identity. My work was part of the Conceptual movement of the ’60s and ’70s. People would call my work “women’s art” through clenched teeth, but when Vito Acconci was jacking off underneath a floor, they didn’t call that “man’s art.”

I was trained as a painter and printmaker, but I wanted my work to deal with social and political issues. When I tried to do that with painting, I found myself falling into illustration tropes. So I started performing, then photographing performances in my studio. The challenge became to capture the duration using photography: the storyboard format was one method I used.

I made Pluck #2 (2001/2017) in my fifties. I started to find myself confronting a lot of ageism, especially the kind leveled against aging women. I wanted to demystify the taboo around female facial hair, so I let my facial hair grow for three months, then set up glamor shot lighting. From a distance, it looks like a perfume ad, but up close, you can see my facial hair.

The works shown in the office area are from a series called “Pre-Resolution Study” (1985). I started to realize that all my work about representation was really about resistance, and I wanted to move past portrait work about individual identity. I photographed myself smashing a plaster wall in my living room as a way to address confinement in general. I built a four-inch-deep lumber frame meant to make the image feel boxed-in, then I painted the frame using a trompe l’oeil technique to make the image into an object that envelopes the figure. The photos are slightly smaller than life size.

I built a puppet stand to make the photographs in the series “Choreographed Puppet” (1976/2007). It was ten feet high, twelve feet wide, and eight feet deep. Young men—one of them was Bill Viola—sat on top and suspended me a few inches off of the ground by two straps tied around my shoulders. I photographed the action using a slow shutter speed, so you can see that my body is moving.

“Choregraphed Puppet” is shown next to two new photographs: History Repeats Itself and The Game Is Afoot (both 2019). At first, I felt like any time I sat down to work on a project about the current state of things, I would come up with something that was almost like a meme. But I was really struck by a medieval chess set I saw at the British Museum. I had this sense that the queen, who looks disappointed and sits with her face in her palm, really speaks for women now. I was also thinking about how everything is like a game of strategy—business, politics. I show myself next to the queen, wearing a version of a twelfth-century costume that I made—a reference to the fact that women have been dealing with the same stuff for nine hundred years, and probably longer.