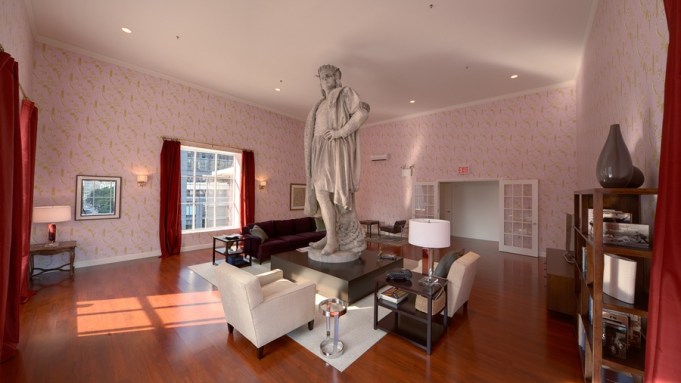 On a TV on a coffee table in a living room, built around the statue of Christopher Columbus, Phil Mickelson appears.

This is in Columbus Circle, at the southwest corner of Central Park in Manhattan, where, ordinarily, the statue of Columbus stands 70 feet above the average person’s head, on a column.

The statue is still at that height, but from now until Nov. 18 men and women and children are able to walk on a floor that has been built within walls around it.

They are able to look at the statue of Columbus close-up.

They’re also able to sit on a plush armchair near it, and walk past a bookshelf and a window, and observe the intricately patterned wallpaper on the walls.

This living room—built on scaffolding, and designed by the Japanese artist Tatzu Nishi—opened to the public Sept. 20. Titled “Discovering Columbus”, it is sponsored by the Public Art Fund; some in the Italian American community have criticized it for what they say is a trivialization of history. Tickets are free, but must be obtained in advance. At the exhibit, you climb six flights of stairs through the middle of the scaffolding to the room, where the statue of Columbus (designed by the Italian sculptor Gaetano Russo, and unveiled in 1892) now seems to emerge out of a floor. Each ticket allows a visitor up to 30 minutes with the statue.

A few days before the exhibit is to open, some workers involved in the construction surround the artist. A man with dark stubble has just finished applying a layer of white paint to an interior wall. “Watch your elbow,” he says to Nishi, who has a sinewy build and dyed blond hair.

Nishi laughs at first, unsure what the man has said. He is not as fluent in English as he is in Japanese.

With the help of a translator, A.i.A. interviewed Nishi about the project.

EDWARD MULLANY: What are the challenges you face making public work?

NISHI The first thing I have to obtain is permission from a city office. Nothing starts without permission. I needed permission from the British royal family when using the monument of Queen Victoria for Villa Victoria (2002), which I showed at the Liverpool Biennial. And the Hotel Continental (2000) that I showed in Aachen, Germany—it was finally allowed only after approval came through by voting of the city council.

Other projects had to be given up when no approval came from a city mayor.

When it becomes a large project, groups of people will come against the project for a variety of reasons. They protest, or send me threatening letters in some cases. However, speaking from my experience, people who are against my project tend to change their ideas around 180 degrees after they see my completed work, and even are willing to help advertise the project afterwards. Also, this time, when the work is completed, I hope people who are against my project go inside the room.

MULLANY How did you become interested in this kind of “outside” art?

NISHI I started my career because I felt bored with the exhibitions where only art-related people would visit. Compared to the past, art is no longer only an ornament to decorate the rooms of those from the privileged classes. Contemporary art influences the minds of ordinary people, and relates to the progress of human imagination; and so I think that exhibitions of contemporary art should be placed in exterior, where there are more audiences, and even more where people who are not interested in art are passing by.

MULLANY Can you explain what you mean by “progress”?

NISHI: I’ll put it in another way, “vitalizing human imagination.” When each person uses his or her imagination, variety of thought, culture, and forms of society will be born. Art teaches people to be free.

MULLANY What role does humor play in your work?

NISHI To attract people who aren’t usually much interested in art to my artworks, I think humor can act as a mediator. Maybe “funny” is a better way to put it, instead of “humor.” Laughter has the power to get rid of vertical relationships, distance, or a gap, even if only for a moment.

MULLANY If someone described you as a conceptual artist, would you agree?

NISHI: I don’t introduce myself as a conceptual artist, but if someone describes me that way, that is ok. And if someone looks at my work and says, “Oh, this is not art,” that is ok too, because you can’t really do anything about how people feel based on what they see.

MULLANY: Does that happen often, that people see your work and say, “Oh, that is not art?”

NISHI: Not really often. Sometimes, but not often.

MULLANY: And what is your response, if that happens?

NISHI: There have been occasions where people have really been against this idea of my public art, and have done demonstrations, and I always invite them to the opening, and say to them, “Why don’t you see it first,” and almost always there is a turnaround, and they become supportive of the idea, and maybe help promote it.

The thing is, if you look at my artwork from the outside, it doesn’t look very much beautiful. Because of the scaffolding and because the box itself doesn’t usually look all that nice. And people know that an art project is going on, but it’s scaffolding and not nice looking. So that’s what people think before. And then they come up into the room, and see that it’s a living room, and then they suddenly get the idea of what I’m trying to do.

MULLANY To what extent does the idea of a statue as a historicized form change within the new context you give it?

NISHI I’m not sure this answers your question, but I’m trying to change a public thing into a private thing, or an outside object into an interior object. So this alteration is important.

In general, the task of artists is to show a different point of view, or a different way of looking at things. For example, when we look at a fork, we generally think of it as something to use in order to eat. But to use a fork as part of a piece of art, then the fork suddenly becomes something else. I want to show these different perspectives.

If people get a new view of one thing that they always think has a certain function—for example, if you show that a fork can be looked at as something else – then this person, whenever they start eating, might think of something else. So this kind of effect is something I think is important.

Often people have the same cycle of life—wake up, go to work, eat lunch—and their imaginations are getting smaller and smaller. They know what every object is, and what it is for, and nothing requires thought anymore. That is why art is necessary.

MULLANY Does your work involve an ethical or moral dimension?

NISHI It isn’t my intention to influence that way. The giving of contemplation is one aspect of art, but it isn’t my aim to force or direct people in any other way. It’s just to give people a moment to think.

Art doesn’t serve to be anti-nuclear or pro-green or anything like that. It isn’t served well by slogans of that kind. It’s completely not good for art. Art should be in a meaningless position. Art shouldn’t be logical. Art shouldn’t be created with any certain aim.