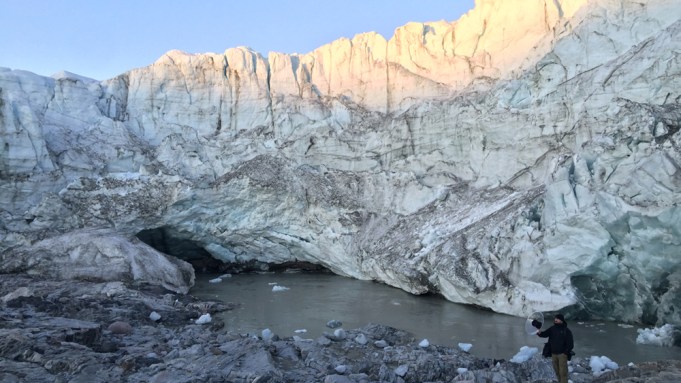 Justin Brice Guariglia works on thin ice. The forty-three-year-old former photojournalist, whose images of China have appeared in National Geographic, Smithsonian, and the New York Times, accompanied NASA from 2015 to 2016, occupied with a project to map the accelerating melting of ice sheets in Greenland. His aerial photographs document the rapid rate at which 110,000-year-old Arctic glaciers are disappearing. To produce his images of snowy vistas that look like cratered moonscapes, Guariglia modified a seventeen-and-a-half-foot-long printer and applies as many as 140 layers of acrylic ink, creating images that exist somewhere between painting and photography.

Until January 7, 2018, the Norton Museum of Art in West Palm Beach, Florida, hosts Guariglia’s first solo museum exhibition, “Earth Works: Mapping the Anthropocene.” The twenty-two works (some as large as sixteen by twelve feet) give durable—and thought-provoking—visual and physical form to the fact and cause of environmental loss.

I recently sat down with Guariglia and Norton Museum photography curator Tim B. Wride in the artist’s Brooklyn studio to talk about the exhibition for Art in Amerca. According to Wride, Guariglia’s work is “implicitly high modernist, à la Edward Weston and Minor White,” referring to the sharp focus and emphasis on shape, line, tone, highlights, and shadows. At the same time, Wride says, Guariglia moves New Topographics photography—unromanticized views of landscapes that reveal man’s impact—“forty years into the future, into a conceptualized, intellectual realm.”

CAROL STRICKLAND Why did you switch from photojournalism to photo-based conceptual art documenting man’s impact on the environment?

JUSTIN BRICE GUARIGLIA I came to the work through living in Asia. For the last twenty to twenty-five years, Asia has been like a rocket ship economically. I remember going outside and my nose was running black from small particles of coal. That’s when [the effect of human activity] clobbered me over the head. I realized that the tremendous growth required consuming as many fossil fuels as possible to power it.

We don’t think that switching on a light will impact a glacier thousands of miles away. It’s all connected, but we’re disconnected from that. We don’t mean to damage the earth when we plug in our phones to charge them, but the accretion of seven billion people doing it brings it to light as an existential issue. All this work is about exploring these ideas.

STRICKLAND Why do you print your photographs of melting glaciers and sea ice on polystyrene?

GUARIGLIA Polystyrene is a very naughty object; it has a lot of baggage. It’s a product of the Anthropocene, a human-made product, yet it’s derived from fossil fuels. If left alone, polystyrene will never biodegrade. It’ll be around forever.

STRICKLAND So you print images of vanishing glaciers on a permanent, petroleum-based material, the production of which contributed to the melting of the ice?

TIM B. WRIDE Justin’s work looks like documentation, but it’s so much more. It’s a distillation of all this information through an artist’s mind. He doesn’t simply picture what’s in front of him but captures what’s gone—and what we have contributed to that “goneness.” It’s hard for a photographer to picture one thing and talk about something else.

STRICKLAND Can you explain your process of creating these works?

GUARIGLIA These images come from seven NASA flights I’ve taken over two years, part of a mission called Operation IceBridge. Prone on my stomach, I would take pictures for eight hours through a window in the floor of a military transport plane at an altitude of fifteen hundred feet. Greenland is ground zero for climate change, and I was recording and sponging up data, collecting as much material as I possibly could. At night I’d download thousands of frames. That’s when I put on my editing cap and looked for pictures that first and foremost hit me on a visceral level. I’m not intellectually processing the images—they have to hit me in the spine and move me.

STRICKLAND The reality is very important, but you want to transcend objective reporting to something more idea-driven?

GUARIGLIA Exactly. I start with documents, and then I try to bridge it out to make it more multidimensional and multifaceted—a compounded object that has the complexity required for this day and age.

STRICKLAND Is that why you started using an acrylic inkjet printer and multiple layers?

GUARIGLI The layering became another tool for expanding the medium of photography. It allows me to introduce all types of materials into the image. I put a preparatory layer—my secret sauce—on the polystyrene to give the works the look they have. Then once the image is printed, ultraviolet light polymerizes the acrylic ink, bonding it directly to the backing so that it becomes one object.

STRICKLAND How did you discover this technique?

GUARIGLIA From trial and error over months of experiments. It was very important to me to break new ground and not do anything that had been done before. That’s why everything is compounded—printmaking, painting, photography, and sculpture. The work has to be on the bleeding edge so you can contribute effectively to the conversation. I’m not trying to make a picture but operating on a level that’s nebulous and metaphorical—to have work that functions as art.

STRICKLAND Do you have a scientific or engineering background?

GUARIGLIA No, liberal arts. The science inspires me and gives me a foundation, but science is knowledge, and art is not knowledge. We’re at a juncture now as a civilization and a society where we have these great, existential issues that need attention. As an artist, you have a responsibility. It’s natural to me as a human, a humanist, and an empathetic individual to engage with these ideas.

WRIDE The work is not didactic, not a hit-you-over-the-head-with-a-sledgehammer statement. The statement [about climate change and sea-level rise] is completely enmeshed in the materiality of it. The work creates opportunities for dialogue. Scientists want to explain, while artists want to ask questions.

GUARIGLIA It has to have complexity and ambiguity. All metaphorical works are documents stretched out in a realm between things. They can’t be reduced to their parts or effects.

STRICKLAND What’s next for you?

GUARIGLIA From 2018 to 2020, I’ll be working with a new mission based out of NASA’s Jet Propulsion Laboratory. That mission is called OMG—Oceans Melting Greenland.